The Aggie Awards – The Best Adventure Games of 2020 page 4

Best Writing – Drama: In Other Waters

Anybody who sets out to design a game with hardly any visual component in this day and age – especially one that sends players to an alien world full of strange new lifeforms – had better come prepared to stretch their writing skills as far as they’ll go. Fortunately, Gareth Damian Martin of Jump Over the Age was more than up to the task. The result: In Other Waters, a bittersweet, moving tale of regret and redemption set against the backdrop of a vibrant and unpredictable ecosystem.

You’ll never see Dr. Ellery Vas or the A.I. diving suit you control except as dots on a map; neither will you ever see an inch of planet Gliese 677Cc in more detail than you can make out on a radar screen. Nevertheless, the world and characters have been crafted with such skill and care that you’ll come away from the experience with clearer images in your mind than any hi-res, ray-traced visuals could have provided. The vivid descriptions and emotional language are such that each player will form a uniquely personal vision of the vibrant Gliesian environment, and no two people will connect to the material in the same way. They say a picture is worth a thousand words, but the many thousands of words in In Other Waters are worth the Aggie Award for Best Dramatic Writing. 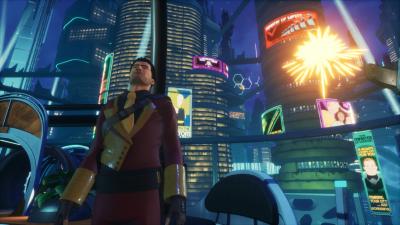 A great story isn’t always accompanied by a worthy script, but in the hands of Charles Cecil and co., there was no fear of that happening in a sequel that took over twenty-five years to arrive. The game received support for its comedic writing as well, as Beyond a Steel Sky is consistently funny in that familiar droll British style, but at its heart this is a serious game with real consequences, and the dramatic writing is even more deserving of another reader Aggie. And it needs to be, as there’s a lot of dialogue with numerous characters to talk to, human and mechanical alike. Some of it is optional, but expect to keep clicking until you’ve exhausted every last topic to squeeze out as much detail as you can about the mysterious and increasingly disconcerting goings-on behind the shiny, utopian facade of Union City.


Next up: Best Character... the envelope, please!