Best Adventure of 2020: There Is No Game: Wrong Dimension

There can be no winner of Best Adventure this year, because there is no game to win it (at least, not in this dimension). We want to further recognize an astoundingly creative experience that manages to upend all expectations of not only adventure games but other genres as well, while still largely working within the familiar point-and-click framework we all know and love. We’d like to further applaud one of the most memorable characters to ever grace the virtual screen – at least in delightfully, if unidentifiably accented voice – who hilariously attempts to obstruct player progress every step of the way. We wish nothing more than to shower admiration on a gam… errr, thing unlike any other, which gleefully eschews all known conventions and creates its own rules as it goes along, weaving in and out of established reality.

But, we can’t. Unless… Draw Me A Pixel’s revolutionary tour de force really is a game after all. Despite its narrator’s amusingly impassioned protestations to the contrary, it manages to provide a good six hours of thoroughly original, nonconformist fun, with puzzles so clever, so unusual that they’ll require all your wits, plenty of experimentation, and a willingness to forget everything you thought you knew to solve. There’s even a hint system to help you out, which surely no non-game would include. So yes, on further reflection, we’ll stand by our assertion that this is not only very much a game, it’s the cream of the crop among 2020 adventures. For being such a bold, brilliant, and surprising burst of pure, unbridled entertainment in a year that so desperately needed a breath of fresh air, There Is No Game: Wrong Dimension is the winner – however reluctantly – of our top Aggie Award. 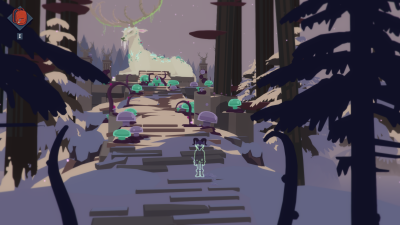 Remember how just about every single year we remind people that every vote counts, and that even though everyone says the same thing, we mean it in a very literal way? Well, as Exhibit A, we present Röki, the winner of our readers’ top Aggie by one vote over 2020’s other most outstanding adventure, There Is No Game: Wrong Dimension. Though our final orders were reversed, there’s no arguing that both games are brilliant examples of the genre done right, each in very different ways, and it’s perhaps only fitting that each claim one of the two Best Adventure awards. Kudos to Polygon Treehouse, which has set the highest of bars for itself with this debut release. We can’t wait to see what the team has in store for an encore.


And so ends the 2020 Aggie Awards. Whew! What the year lacked in … well, pretty much everything good, it at least partly made up with such a great selection of new adventures to play.

With so much to choose from, not every game could win, but they can be appreciated, so we’d like ALL adventure game developers to take a bow for a job well done, and accept our applause for their contributions in helping us get through such a very trying year.

We are also grateful to everyone who participated in our reader poll, and of course to our incredible Patreon backers for their input and invaluable support.

If the start of 2021 is any indication, this coming year is going to be no less frenzied for new releases, so we’d best all get back to gaming! Stay safe, stay well, and let’s meet back here to do it all again next year.