Best Non-Traditional Adventure: There Is No Game: Wrong Dimension

No point has been debated with more gusto in the decade-plus since the Aggies began than the dividing line between the traditional and non-traditional categories. No matter where you draw the line, however, we can all agree there’s nothing at all traditional about a game that has players forgo searching for items in favor of letting them tear the very interface apart to use the pieces as they see fit. It’s not just that There Is No Game: Wrong Dimension doesn’t want you thinking “adventure game” when you look at it; as the title says, it doesn’t want you thinking “game” at all. While there certainly is a game here – a brilliantly clever and often hilariously fun one – it emphatically does not want you to play it, and you’ll have to struggle tooth and nail using the game’s own logic, controls, and graphics against it if you want to bypass its many attempts to drive you away.

And yet, despite what it would have you believe, Wrong Dimension is an adventure game through and through. There’s no verb coin or dialogue menu to be found, but each challenge you come across is a puzzle in the truest sense, requiring all your wits and lateral thinking skills to solve, albeit occasionally within strict time limits. Where a normal point-and-click adventure would ask you to gather specific items from the environment and keep them tucked away for future use, this game forces you to consider the entire field of play and to think carefully not about what everything is, but what it could be. Icons, text boxes, menu options, script functions: if it’s visible on-screen, odds are you can use it to progress. This leads to some breathtakingly unconventional puzzle solutions that never feel unfair. No matter how impossible or bizarre each successive obstacle may seem at first, sticking with them and learning to speak the game’s language will lead you to a series of “aha!” moments like few other titles can manage.

Draw Me A Pixel’s There Is No Game: Wrong Dimension is a celebration of outside-the-box thinking – of gathering up all the rules, chucking them out the window, and just playing with the understanding that anything goes. “What would it be like if anything were really, truly possible in a game?” it asks, and then grants you several thoroughly entertaining hours to experience the joy of discovering the answer to that question for yourself. It’s anarchic, it’s frenetic, it’s one of a kind, and despite all its protestations about being a game in the first place, it’s ultimately the best non-traditional adventure of 2020. 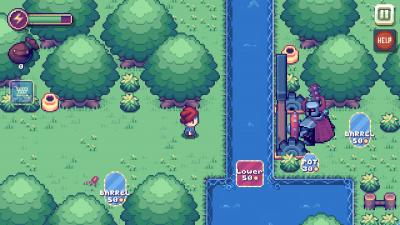 There Is No Game: Wrong Dimension flies straight past non-traditional to outright anti-traditional as it relentlessly skewers typical video game conventions and the standard reactions that result in rapid progress. None of that works in this defiant don’t-call-it-a-game, and the result is a deep dive into rethinking and retooling the adventure genre. In this daft dimension, swords both puncture and punctuate, zeros and ones are weaponized tears, the Home button can break your ankle, a game show answer might be your license plate number, and Miss New York is a polka dot bra strapped to a motherboard. It’s recklessly original, endlessly engaging, and fiendishly absurd. Be prepared for just about anything to happen and embrace the reality that you’ll be the one sorting through the clever solutions and lapping up the comic debris. It’s no wonder it copped both staff and reader awards as the best of its bunch.


Next up: Best Traditional Adventure... the envelope, please!