The Aggie Awards – The Best Adventure Games of 2020 page 3

Size Five Games’ Lair of the Clockwork God is more than just a funny game with good jokes. Its very premise is built on a comical foundation that can evoke laughter: Ben and Dan (of Ben There, Dan That! and Time Gentlemen, Please! fame) are back but have found themselves at an impasse. You see, Dan doesn't want to be a point-and-click adventurer anymore. He's decided that the future is indie platformers, baby! No more inventory, verbs or dialogue; it's all jumping, collecting, and upgrades for Dan! Meanwhile, Ben won't budge from his graphic adventure roots. He's still going to talk to everyone and pick up everything that isn’t nailed down, and he won't even step over a tiny crack in the floor because it's too much like jumping. It's a brilliant (or should we say “brillo”) conceit that plays itself out in a full-length parody of both genres.

Ben and Dan are having this argument when they stumble upon the plot: ALL THE APOCALYPSES ARE HAPPENING AT ONCE! And so they’ll have to somehow work together to save humanity, all the while lobbing witticisms as they go. Dan harasses Ben about combining inventory items: “Can't you at least call it 'crafting'?” Ben finds himself in the place where platform heroes go between respawns and has to trick the bureaucrats behind the scenes – dinosaurs, for some reason – to send him back at the end so he can skip the level. The two mock each other for callously killing characters and over-using game mechanics, and poke fun at the states of their respective industries. It’s fourth-wall-breaking to the nth degree, and it’s always hilarious. Lair of the Clockwork God will have you rolling in laughter from beginning to end, all while being fun and challenging to boot. So we hand the Aggie statuette for Best Comedy Writing to Ben for storing in inventory, while Dan shows off his athletic prowess with some dance moves and celebratory cartwheels. 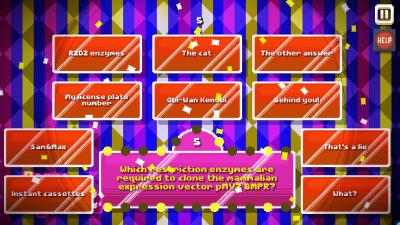 The grumpy Game in There Is No Game: Wrong Dimension just wants to be left alone, but fat chance of that! As you defy him and leap into this wacky, uproarious battle of wits, you can expect to encounter gleefully odd and unexpected machinations to push you back out. Among Game’s many snarky comments is a mockery of well-known player complaints: constant clicking, dying when triumph is almost within your grasp, forced restarts, pay-to-win greed, and unfinished games with updates. For malicious, snickering asides, on-the-mark wisecracks, and forcing us to laugh at our gaming egos with humiliating self-recognition, this game snags our readers’ nod for best yuks by a convincing margin.


Next up: Best Writing – Drama... the envelope, please!