You might think live-action adventures have an unfair advantage over those that rely solely on voice-overs for this award, but given the reputation of many FMV games over the years, the opposite might actually be true. The potential benefit may be greater, but so is the challenge that few games can successfully meet. Enter The Complex, an interactive movie that takes place in a maze of labs considered a “womb of scientific advancement” near London. Corporate leader Nathalie Kensington (Kate Dickie, Game of Thrones) warns nanocell technology specialist Dr. Amy Tennant that the facility may be harboring a biohazard. Dr. Tennant (Michelle Mylett, Letterkenny) is young, brilliant, and a tad overconfident. Mylett flawlessly portrays the protagonist’s ruthless passion for the truth, somewhat softened (if directed by certain player choices) by charmingly credible gestures of compassion and reassurance.

She is joined by jaunty, smart and satirical Dr. Rees Wakefield (Al Weaver, best known for his role as the conscientious cleric in the British series Grantchester), who aces his performance as a less-than-conscientious rogue scientist with suspect scruples. Weaver aptly embodies genius-level tech expertise and delivers perfectly timed comedic jabs that roil the atmosphere of desperation in the lab. Secondary but no less believable cast members display pathogenic symptoms of spasms, confusion, and pain. Scenes of conflict and discovery unfold at a steady clip: frustration when solutions don’t pan out, snide satisfaction when hacking reveals secrets, and tense communication with administrators in their “safe” distant office. Real emotional range is needed at times, too, as player decisions can result in exultation or anguish, interspersed with occasional spurts of realistic violence. For showing us a fascinating portrayal of life-or-death choices, sky-high ambition and brave self-sacrifice, Good Gate Media and Little Jade Productions and a stellar cast of thespians land this year’s coveted Best Acting Aggie. 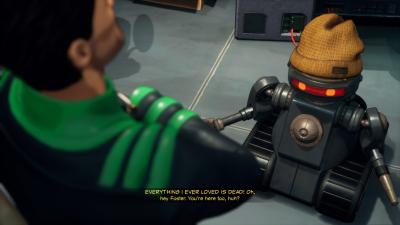 Another casualty of the decades-long gap between Beneath a Steel Sky and its sequel was the availability of the original voice cast, which had to be replaced this time around. That can be a difficult hurdle to overcome for fans of a beloved work, but once again Beyond a Steel Sky was more than up the challenge, earning the new roster the reader Aggie for best acting – in this case through voice-over alone. Eric Meyers’ portrayal of Robert Foster is noticeably different than his predecessor’s, but this makes sense given the ten in-game years that have passed between adventures, while Roy McCrerey is a delight as the new Joey. The rest of the human cast is also excellent across the board, but it’s Joey’s fellow bots that really steal the show. These “d-RYDs” are as eccentrically different as they are plentiful, and each actor brings their own distinctly amusing spin to their respective roles.


Next up: Best Sound Effects... the envelope, please!