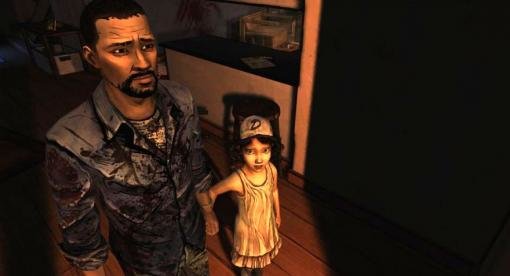 You’d be hard pressed to find a weak link in this year's award winner for best voice acting, The Walking Dead. The script and characters are well written and engaging in their own right, but the impressive vocal performances given to the multitude of characters added an extra depth and nuance that made the game so much more memorable. Leading the pack is Lee Everett (Dave Fennoy), who is able to show both a grim and cautious attitude as well as kindness and caring when given a moment to reflect on all that’s happened to him, both before and after the zombie apocalypse. Clementine (Melissa Hutchison) is another one of the game’s standouts. Children are often dreadfully performed in adventure games, but Hutchison does such a convincing job that it’s difficult to tell that it’s an adult voicing the character. Kenny (Gavin Hammon) has a great gruff, redneck attitude that gives way quickly to the love he feels for his family. Lilly (Nikki Rapp) is torn, confused and frustrated as she tries to keep control of the group.

In fact, the entire cast is top notch, giving each character a complex emotional range no matter how small a role they play. Well, except for the undead walkers, who consistently sound mindless and hungry for flesh, never failing to raise the requisite tension when they're nearby. There are no mailed-in performances and better yet, no over-acting, which is surprising given the series' comic book origins and zombie apocalypse setting. It's easy to imagine some B-movie camp sneaking in, but there's none to be found here. And it was crucial to get the voices just right. As a game not about zombies but rather a raw human drama in the face of unspeakable horrors, an emotional connection with the ever-changing cast of survivors was imperative in making players care about their safety – a concern that often met with devastating results. With such believable and memorable performances all around, there was no doubt in our minds that The Walking Dead deserves the Best Voice Acting Aggie this year.

Runners-Up: Cognition: An Erica Reed Thriller – Episode One: The Hangman, The Journey Down: Chapter One, Yesterday, Primordia 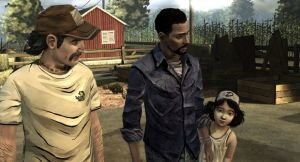 Clementine sounds like a little girl! That alone is a huge accomplishment for Telltale, as kids in games often sound like the adults they really are in the recording booth, horribly overacted to compensate. But it's not just Clem that delivers a convincing performance in The Walking Dead. The baritone-voiced Lee sounds exactly like the gruff killer-with-a-heart-of-gold-wrestling-with-his-demons that you'd imagine, and there's no letdown right through the supporting cast.