Passing away quietly at GameTap on the night of April 9, 2008 was Myst Online: Uru Live, survived by a small but fiercely dedicated community of gamers.

I make no claims of being a MOUL expert, or even a Myst devotee.  Though I've played all the games in the series and readily acknowledge the virtually unrivalled quality of them (at least in the adventure genre), I don't consider myself a particular "fan" of the franchise, and my only experience with the online component came briefly in its earliest, still-underformed incarnation.  It just doesn't seem right, however, to let the occasion of its demise go unmarked, so I'll offer a few genuine, if dispassionate, words in reflection. 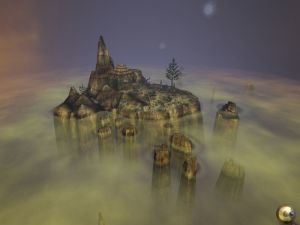 To say that the life of MOUL was troubled from conception is perhaps an understatement.  It didn't even begin as Myst Online, of course, but simply Uru, an incredibly ambitious online multiplayer adventure intended to bridge the gap between the real world and the popular Myst universe.  While the main Myst series continued in the hands of other studios, Uru was spearheaded by none other than Cyan Worlds, the original series creators.

Reportedly in one stage of development or another for upwards of six years prior to its (first) release, the original idea dates back before the huge influx of MMO (massively multiplayer online) games that populate the landscape now, back before many people even had broadband, back before GameTap was even a twinkle in Ted Turner's eye.  Online gaming was already prevalent for shooters and RPGs, but not the kind of widespread persistent-world multiplayer experience that exists today.

As I understand it (rightly or wrongly), the production of Uru (known by a variety of other working titles at the time) was as costly as it was lengthy, draining millions of dollars out of Cyan's pockets.  Rumblings began about whether the project would ever see the light of day, but at long last, a partnership with Ubisoft was created to bring Uru: Ages Beyond Myst to the public as both a single player and multiplayer experience.  Anticipation was high, even if expectations were guarded, and Myst fans delighted in the prospect of joining a living, evolving modern day D'ni society. 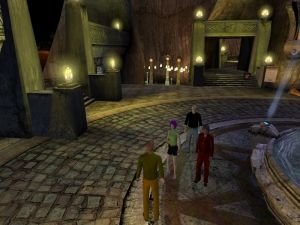 Alas, it was not to be.  Or at least, not really.  The late 2003 release of Uru included the full single player component as advertised, but only a beta-state version of the live "Prologue", which was itself merely a basic introduction to the full multiplayer experience.  And it was virtually unplayable.  Both technically and administratively, the online game was effectively stillborn at launch.  There were promises and even the occasional signs of improvement, but they would never be fully realized.  After only a few months of this disastrous debut, Ubisoft pulled the plug on Uru Live.

Still, hope seems to spring eternal where Myst is concerned, and up sprang Until Uru, a Cyan-endorsed but community-driven, stripped-down version of the game, providing the online functionality of Uru Live without any actual gameplay.  If nothing else, this allowed the diehard fans a chance to continue meeting together, keeping alive the special kinship already developed.

As it turns out, good news was just around the corner, but darker days followed first, when it was revealed that Cyan had been forced to lay off the vast majority of its staff.  Worse than the downfall of Uru was seeing the one-time adventure giant brought to its knees.  But remember what I said about hope springing eternal.  Sure enough, so soon after the layoff announcement that the grieving had barely begun came the updated news that Cyan was back in business with big news in the works. 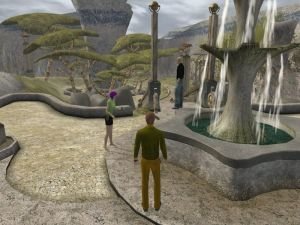 Some time later, that news became official in the announcement of the newly-rechristened Myst Online: Uru Live, to be available exclusively through GameTap, Turner's broadband entertainment network.  The new iteration again promised much of what the first couldn't deliver, with new Ages, puzzles, and other content added regularly, all the while providing a persistent world for players to meet and gather and socialize.  Once more, Uru had life.

GameTap went to significant lengths to promote Myst Online, providing Mac support and limited-access availability to gamers around the world, far beyond the scope of its regular North American subscriber base.  Still, the sporadic content updates proved to be a challenge once the initial novelty wore off, and so an "episodic" formula was designed, promising new story and gameplay additions on a more tightly-focused schedule.  This episodic model lasted for several months, with the final installment of "season one" launching last November.

In February 2008, however, the death knell sounded again, as GameTap revealed its plans to discontinue the series in 60 days.  Fan reaction was, understandably, one of disappointment, sorrow, and some bitterness at having seen the franchise resurrected only to be killed off a second time, but the decision was final (if slightly extended) and on April 9th, the book on Uru, so to speak, was closed again.

Is Uru gone for good?  Who knows.  Those that thought so once were wrong, and anyone who underestimates the spirit of the hardcore Myst community simply doesn't understand their passion.  It wouldn't surprise me at all to see another fan-based revival in some form or another, and for the many who benefitted from the fellowship afforded by the series, I sincerely hope it happens.

At the risk of kicking dirt on Uru's grave, however, I will say that it's probably time the larger grand experiment was laid to rest for good.   Some will argue that the game was simply ahead of its time, and indeed the Millers and Cyan were visionaries and pioneers, and can only be commended for their efforts.  But at the end of the day, the idea simply doesn't work.  I firmly believe that online multiplayer adventures are feasible.  But in a genre where gameplay is inflexibly dependent on both story and surprise, there simply won't ever be enough to constantly do to justify a persistent online world.  "Live" plot updates are not the answer, either, as these reward existing members but alienate potential newcomers.  No one likes joining a story in progress, after all.

So no, if there's to be a future for Uru, or any online multiplayer adventure that follows in its footsteps, it would do well to learn from the failures thus far.  (Yes, this is sort of like the "organ donation" bright side of an unwanted death.)  A task-based, self-contained adventure has all kinds of possibilities, and organizing groups to achieve it along the lines of an FPS squad combat game (minus the combat, of course) should be far more manageable than the utterly unwieldy attempt to coordinate updates in a persistent world with not nearly enough gameplay to warrant it.  More an emulation of Battlefield than World of WarCraft, for those familiar with other genres.  If we ever see such an adventure game, and I someday hope we do, it will owe much to the foundation laid by Uru Live, whether that influence is recognized or not.

Cyan, I salute you for your endeavour in this time of mourning.  Though not personally touched by the game as deeply as many, I applaud any attempt to forge new paths, to take that bold risk of originality and ambition, which paves the way for others even long after its memory has faded.  You've done that with Uru, and here's hoping that the game's legacy far exceeds its own success.

Uru: Path of the Shell 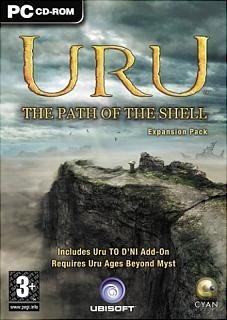