Just when you kept thinking Deck13's Haunted was dead and buried over the last few years, killed off by fictional release dates and publisher bankrupties, the game would rise from the ashes once again with all new promises and hope. The latest such resurrection occurred last fall with news that Lace Mamba Global had picked up the distribution rights to the long-awaited English version of the game. Like its ghostly subject matter, the game's existence may be hard to believe in at this point, but rest assured that Haunted is really coming this time. [Edit: Or maybe not. See update at article's end.] I know, because I've just finished playing through a near-final version of this quirky supernatural adventure, and lived to tell the tale. (Or did I?)

Unlike the German developer's previous Ankh and Jack Keane offerings, Haunted tells a somewhat darker tale — although make no mistake; this is still an offbeat comic adventure for the most part. The game is set in 19th century London, beginning with a young girl named Mary waking from a nightmare to find herself moments from being dissected on an operating table. Mistaken for dead by the one-eyed, snivelling henchman of the prim, monocled Professor Lindsey Ashcroft, Mary quickly discovers that her clearly-not-dead status is merely a temporary inconvenience to her captors. Fortunately, she's able to elude their clutches in time (with a nasty knife scar to show for her troubles), and must now escape the cavernous laboratory in which she's trapped. 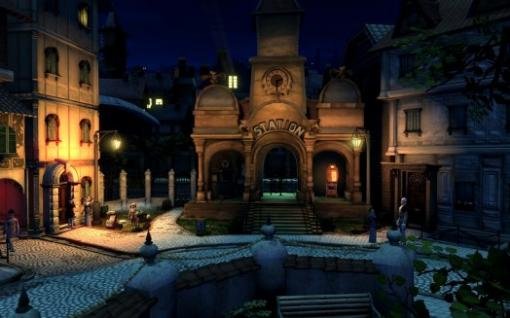 Once in control of Mary, the game plays much like any other traditional point-and-click adventure. All interactions are performed through left-clicks only, with an always manageable-sized inventory permanently displayed at the top of the screen once acquired. Single-clicking causes Mary to rather slowly amble to her appointed goal, but double-clicking gooses her into a run. Scenes usually change automatically when double-clicking exits, but you'll have to move about manually as well, as the screen sometimes pans with Mary's movement, revealing previously unexplored areas.

There are three different difficulty options to choose from, though really the easier ones only offer access to optional contextual clues and hotspot highlights. I found the clues inconsistent in their usefulness. Although tiered, most of them repeated information I already knew, stopping just short of the point where I was actually stuck. The hotspot highlighter certainly serves its purpose, but has its own troubles. The icons displayed can be hard to see at the best of times, and because of the scrolling 3D environments, they have a tendency to become misaligned with the actual objects. Still, I found the feature invaluable in identifying some of the more concealed items.

Where things get interesting and separate this game from most is when Mary begins to accumulate ghostly companions. She's not sure why she can see ghosts when others can't, and as a runaway loner who wallows in guilt over her little sister's death, she's not at all happy to have company. But she wouldn't get far without them, as each ghost has a special skill that enables her to get past a variety of unusual obstacles. One has the ability to ignore intense heat, cold, and electricity, another can physically interact with any item that's been touched by death, while a third can transform himself into any form of water. There are more to discover as well, as Mary will end up with six cohorts all told. Generally they hang out in a nearby location as you wander about, accessed and utilized strictly through inventory-like icons. But occasionally they will visibly follow you around, and one late ghost can briefly be played first-han... err... paw. 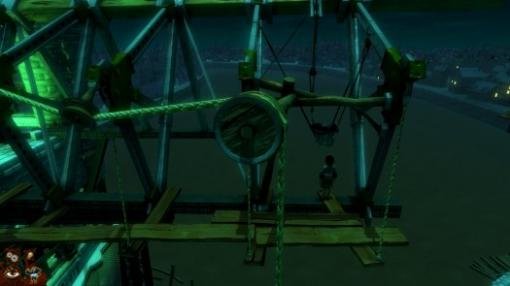 Not only do the ghosts spice up the gameplay, they also provide much of the entertainment value, as they often chip in with their own distinctive impressions. There's Oscar the Pitiful ("The Powerful!", he insists), the pint-sized pirate runt with no crew or ship but a tendency to get seasick. William Wallace hasn't aged well since Braveheart. The kilt-wearing Scottish hero is big and bulbous, with bulging eyes and a perpetually depressive nature that belies his impressive lifetime achievements. (He does still hate the English, whom he keeps unsuccessfully trying to annihilate with his trusty axe.) But Wallace isn't the only cultural icon skewered here. Few sacred cows are left unturned, like Confucius living in a fish bowl and taking baths with a rubber ducky. Another surprise ethereal entity will surely have Catholics rolling over in their graves (the dead ones, I mean, though that's probably sacrilegious to say). As a group they bicker a lot, and their quips provide much of the game's comedic quotient, though the dialogue leans more towards smile-inducing silliness than thigh-slapping hilarity.

With her ever-increasing entourage, Mary eventually discovers that Ashcroft is seeking to capture and harness the spirits of ghosts, including her very own sister Emily. But there's something odd about little Emily, who speaks in garbled gibberish like a record (remember those?) playing backwards. To unravel this mystery, and to keep her sister's ghost from falling prey to the villainous doctor, Mary must make her way through a tower bridge under construction, a run-down old theatre populated by the spectres of costumed Shakespearean actors, and a central town square full of stuffy passersby. Later she boards a train bound for Scotland, with a stop at a rural church, and then ventures to a gypsy camp in the autumn woods of Transylvania. There's also another bizarre detour reached by an experiment gone badly awry. It's a nice mix of locations that feel significantly different both from each other and from the usual suspects in adventure games.

One of the defining characteristics of many areas is their height. While most games sprawl mainly across a horizontal plain, Haunted routinely sends players UP. Ashcroft's laboratory houses scientific equipment in its upper levels, the theatre rafters must be carefully traversed, and a windmill can be climbed following a daring tightrope walk. The vertical effect is merely cosmetic, but it's a clever way to maximize resources. For the most part each of the game's six chapter limits you to one central area of several screens each, but there's plenty to do and explore in each, so you'll never feel shortchanged. 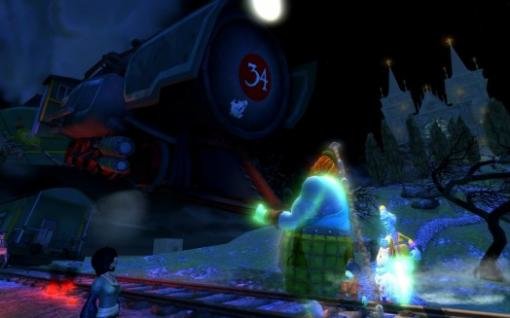 Puzzles are almost entirely of the inventory or ghost-use variety, including multiple item combinations. Some scenarios feel organic, like figuring out how to drain a sluice, distract a watchful lovesick woman, or repair a broken church confessional. As often than not, however, Deck13 has stuck with the more zany type of obstacles of their previous adventures, whether confronting a flying fox with a cold, creating a makeshift roller coaster projectile, or making an ugly chicken beautiful to a lustful rooster (the writers wisely underplayed the jokes about the "nymphomaniac cock"). Several solutions are certainly a stretch, and success at one objective might mean progress in another first, but there's no fear of dying (and would it matter if there were?) and no action sequences, so you're free to take your time and experiment.

Haunted looks just like you'd expect from a Deck13 game, with vividly stylized 3D background graphics and whimsically caricatured models. There's a much more muted palette this time around, as much of the story takes place at night, but the artists still rely on heavily saturated colours. The camera swoops and zooms to good effect in some places, though occasionally it's more of a nuisance when trying to guide Mary to a suddenly-moving target. Animation can be spotty; what's here is generally well done, particularly when a ghost carries out his or her assigned task, but the game frequently fades to black to avoid more complex actions.

A suitable musical score plays throughout, at times resembling an appropriately Addams Family-ish (remember them?) style. The preview version I played was already fully voiced, and the actors all do a good job. Some may quibble about the Scottish and Asian accents not being authentic, but even these are fairly understated so as never to grate. Mary has a pleasant English accent, and her concern and remorse come through admirably, in stark contrast to Ashcroft's cold, calculated taunts and observations. Many (but not all) dialogues can be clicked through to speed up, which comes in handy because the supporting characters can be chatty — one cross-dressing gypsy "mother" can ramble on so long it turns night into day! Unfortunately, one noticeable audio problem (and a perplexingly recurring one for this developer) is that background voices are so loud that they drown out Mary's commentary and conversations. It doesn't happen too often, but you'll be thankful for subtitles when they occur. 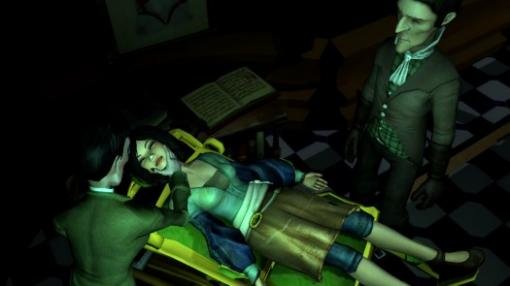 In an usual feature for adventure games, there's an entire bonus scenario available in Haunted. First introduced about halfway through the game, at first it merely takes the form of a rather uninspired series of fetch quests. It can't be completed without the full complement of ghosts, however, which means that only after the credits have rolled can you return to complete the mission. This results in a whole new swamp-like location that may well be the best of the lot. There's a good half hour of gameplay to be found, adding a welcome epilogue to the eight or so hours the main adventure provides.

All told, Haunted feels very much like what it is: a Deck13 adventure, complete with all the quirky characters, wacky puzzles, playful atmosphere, and solid production values you've come to expect, plus a few rough edges along the way (which also shouldn't come as a surprise). The darker premise results in a few serious moments and a more sombre (for Deck13) colour scheme, but the game never takes itself too seriously, its tongue planted firmly in cheek most of the time. If you only like your ghost stories scary, you certainly won't find that here. But if you're dying to play (figuratively speaking, I hope) a cheeky supernatural adventure, make sure your EMF detector is switched on when Haunted goes live next month.

Update: There may be a ghost left in the machine after all, as ongoing publisher financial difficulties in Germany now threaten to delay the release of Haunted once again.  Have faith, and stay tuned!

gray pierce
Very much looking forward to this game. Sure it won't be a masterpiece but it'll be fun!

Majsan
Good to hear this game hasn't been lost in limbo!

Advie
Finally , GREAT NEWS ,looks promising through this great preview, But one strange thing though , nothing about the awaited English release of Black Sails yet ! ....Deck13 is so terrible (always) with their releases dates...and with this flow i would easily imagine/expect a Jack Keane2 release not before 2015 and that wouldn't be surprising at all ,then ...