Adventure games may come in different shapes and sizes, but they all share a common focus on puzzle solving within a narrative framework. (That’s how we at Adventure Gamers characterize the genre, anyway!) Some of us play for the brain-stretching puzzles; for others, an engrossing story comes first. At the recent Game Developers Conference, I saw two projects that, while not strictly adventure games, are likely to pique the interest of gamers who fall into the story camp: Home, coming this summer from indie developer Benjamin Rivers, and The Thirty Nine Steps, developed by The Story Mechanics and soon to be published by Lace Mamba Global. While their puzzles are few to none, both of these interactive narratives are shaping up to be great examples of how the adventure game conventions we know and love can be used to tell stories in new ways. 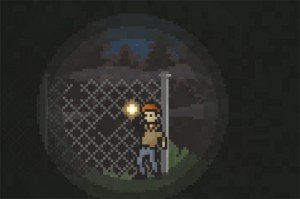 Benjamin Rivers, a fan of the Silent Hill series and the adventures of the (sadly) defunct Cing, started work on Home out of a desire for evolution in the adventure genre—which is ironic, considering its distinctly low-res appearance. Created with the GameMaker engine, Home is a pixel art horror game where you play as a man who’s just woken up in a strange house, unsure how he got there. (During my demo, the man’s name was not mentioned, but he’s referred to as “Rachel’s Husband” on the game’s website.) Although the lights are out, the protagonist carries a flashlight, which illuminates the area just around him. Using the arrow keys, the player must lead him left or right through a series of doors and up and down stairways and ladders, looking for a way out.

As he passes near certain objects, a white outline displays to indicate that Rachel’s Husband can interact with it; pressing the space bar triggers an observation. One of his first discoveries is a dead body, still warm, lying in the first room he enters. Is it the man who lives here? Farther down the hallway, he passes a mirror and notes that he looks disheveled and has blood on his shoes. Elsewhere he finds a photograph of the dead man and a woman. (The victim’s wife?) As he descends into the cellar, he finds a collection of newspaper clippings that describe recent murders, then pictures of him and Rachel, then a box of clothes he remembers recently throwing away. The farther he goes in search of an exit, the more uneasy he becomes...

Home’s graphics are minimalist: 8-bit pixel art overlaid with a grainy effect that gives the feeling of an old movie. Though not all of the audio was in yet, the demo I played included some spooky sound effects such as creaking doors and dripping water. Narrative messages display as white text on a black background; a white outline with notched corners emulates the text cards in a silent film. Interestingly, the story these messages convey is told in first-person, past tense—as if the narrator is retelling the tale of his escape.

Even though the events are described as if they already happened, players take an active role in shaping the story by choosing “yes” or “no” to many options presented during Rachel’s Husband’s methodical exploration. For example, upon discovering a gun, the protagonist reflects on whether or not he took it. If you answer yes, he puts it in his pocket for future use; if you answer no, he continues on without it. Later he might comment that the gun is heavy in his pocket, or he might say that he wishes he hadn’t left it behind—indications of the subtle narrative shifts that occur in Home depending on your choices. Besides having several chances to pick up or leave behind a particular item, my demo also included opportunities to choose between certain actions. Some seemed inconsequential, such as springing a mouse from a trap or letting it die, while others were more obviously dangerous, such as attempting to climb down a busted ladder or seeking out an alternate route. Whichever choice you make, the narrator references the result later on, effectively weaving your choices into the fabric of the narrative. The overall storyline may not change substantially, but Rivers promises enough variation to warrant a couple of replays.

As the mystery builds, the narrator speaks often of Rachel, wondering if she’s safe and filling in bits of the couple's backstory. His exploration takes him through eight distinct “levels”—including the house, a network of underground tunnels, a forest, and an abandoned factory—and in each one, Rachel’s Husband comes across increasingly damning evidence of a horrible crime. (More dead bodies, a knife caked with blood, torture equipment... your run-of-the-mill horror movie props, really.) All of these he regards with a befuddled discomfort that carried over to my playing experience. The set-up is not particularly subtle; clearly something terrible has happened and it’s only going to get worse. But the intimacy of the first-person narration, combined with the artwork’s simple aesthetic and the player’s ability to influence the storytelling, make the suspenseful Home an unexpectedly engaging experience—an interactive page-turner, so to speak.

When Rivers releases Home for PC on June 1, the download version will cost just $2, and a limited edition physical copy with “feelies” will also be available. (Preorder details can be found on the official Home website.) Mac and iOS releases are a possibility later on. 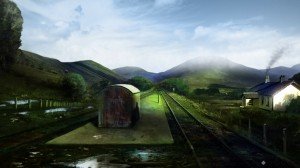 The first in a series of “digital adaptations” from Scottish developer The Story Mechanics, The Thirty Nine Steps is an interactive ebook based on the spy novel of the same name. Of course, with the growing popularity of Kindle and other e-readers, there are tons of ebooks out there—why should an adventure fan care about this one? For starters, its development is backed by Lace Mamba Global, one of Europe’s leading adventure game publishers. During our demo, PR manager Claas Wolter talked about ebooks’ untapped potential: for example, an iPad 3 is about as powerful as an Xbox 360, yet the most audio or animation you’re likely get from an ebook is simulated page-turning. Thanks to multimedia gaming technology, ebooks have the potential to be much more robust, with a novel’s setting, scenes, characters, and action presented via graphics, sound effects, music, and animation. Not only will this approach give current ebook readers a more immersive experience, but The Story Mechanics and Lace Mamba believe it may also “reattract” some people who have moved away from reading in favor of more dynamic entertainment.

First published in 1915 by Scottish author John Buchan, The Thirty-Nine Steps is a well-known spy novel that has been adapted for screen a number of times (most notably by Alfred Hitchcock). The plot involves an innocent man who is wrongly accused of murder and gets caught up in an international espionage plot around the start of World War I. Wolter explained that the digital adaptation’s text follows the book faithfully, with only minor cuts made where an animation or sound effect made a description redundant. (“Howling wind,” for instance.) The most significant change is that rather than progressing linearly, the story has been divided into an “event tree” with about 70% of the story designated as mandatory and the rest as optional. The event tree is like a map that lets you navigate to different pieces of the story at your own pace, with new bits becoming available as the plot progresses. Optional text can be discovered by interacting with certain elements of the environment, such as choosing to look at a newspaper. 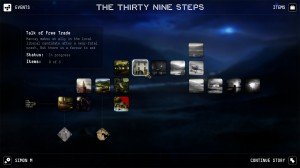 Developed using the Unity engine, The Thirty Nine Steps has layered backgrounds with animated elements, easy to read on-screen text, and a point-and-click interface that allows for limited exploration within the novel’s scenes. The high-res, realistic graphics are detailed and colorful—comparable to the backgrounds in an adventure game. Although the story is mainly told via on-screen text, there is some voiceover during key moments, allowing readers to hear local accents (much of the story takes place in Scotland). There are no puzzles or multiple-choice dialogues to be found, but some gameplay elements have been tucked into the experience, like collectibles and achievements. The story auto-saves, so you can always pick up right where you left off, and it uses cloud saves so you can start reading on one device and continue on another.

This interactive novel may not have the “try everything on everything” flavor of adventure games that we're used to, but for those who play so they can experience a narrative, such gameplay might not be missed. (At least the flow of the story will never stall because of an unintuitive puzzle or easily overlooked trigger.) And since the digital adaptations will be even more accessible than adventure games, Lace Mamba hopes it will serve as a bridge to attract new people to the genre. We’ll find out later this year, when The Thirty Nine Steps releases for PC, Mac, and iOS.