Review for Cognition: An Erica Reed Thriller - Episode 1: The Hangman

There's something special in the air anytime a new indie studio releases their first commercial project, but there's a particular significance to the launch of the first episode of Cognition: An Erica Reed Thriller from Phoenix Online Studios. Not only does it come from the same team that spent the better part of a decade seeing its unofficial fan-made King's Quest 9 sequel through all sorts of potential death screens to the light of day as The Silver Lining, a flawed but joyously ambitious episodic freeware epic, but adventure game luminary Jane Jensen has been brought on board as a hands-on story consultant for Cognition. Not surprisingly, Episode 1: The Hangman packs a dark storytelling wallop within an impressive, if sometimes very uneven, game.

The game's prologue sets up the background story of Erica Reed, the titular heroine of the FBI's Boston office. The lengthy opening sequence takes you through the events of a horrible family tragedy that sets the stage for Erica's thirst for bringing criminals to justice. The tonal change from the family-friendly fare of The Silver Lining could not be more extreme, as the prologue is gory, profane, depressing, and framed with the most unsettling quasi-industrial soundtrack I can remember. Moving to the present day, there is little more joy to be found as the game takes you right into the scene of a brutal midnight hanging, complete with blood splattered on the walls due to a particularly violent finishing touch by the killer.

Having properly expressed its adult nature, Cognition then settles into more of a traditional detective story, with some nice emotional touches as Erica continues to confront the after-effects of her brother's senseless death and now fights to control the special cognitive powers that are beginning to drive her mad. It is within the supernatural nature of these cognitive powers that Jane Jensen's influence is clearly felt. Erica, with the help of an antique shop curator named Rose (a matronly rendition of Dr. John from Sins of the Fathers), develops new psychic abilities and uses them to re-open an old case and track down a vicious murderer. 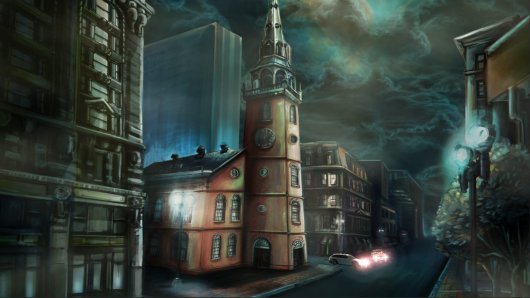 The first episode of Cognition is, understandably, primarily about setup—Erica's initial power (the ability to see the past actions associated with a significant object) must be explained, and then two more powers (projection and regression) must be introduced and brought into focus. The episode also requires the introduction of multiple characters, very few of which are more than one-dimensional at this point, and a quick primer on the horrific background of the murders that form the game’s background story, plus other related crimes. It is remarkable that the episode compresses as much story as it does into 5-6 hours of playtime, but don't expect a lot of resolution, as the episode ends with a bleak and explosive cliffhanger and plenty of story threads unwound.

The game is at its best when making use of the cognitive powers, a creative spin on an otherwise very traditional point-and-click adventure game. The interface is a standard context-sensitive pop-up type, with only the addition of the Cognition sphere at the bottom left. These powers are used in sometimes brilliant ways, but are not relied on as a constant crutch for solving all puzzles. The first power is straightforward, used almost like an inventory item in order to see a flashback cutscene. The projection power, when available, involves selecting three related hotspots in order to project evidence that previously existed in the location. It’s a nifty way to bring back a corpse (or other less grotesque evidence) that you no longer have access to. The regression power is best left unspoiled, but provides the game’s best and most complex puzzle as you assist a witness in reconstructing their own jumbled memories of a significant event.

The game is definitely not at its best when the pace slows down, and that is mostly the fault of inconsistent writing and implausible actions. Cognition can be riveting in its most intense moments, but nearly preposterous when Erica's normal workaday interactions with the other characters are the focus. Your partner John is a lazy slob who never gets up from his desk to help you and really likes doughnuts; your boss Davies is a brash and bullying authoritarian who really likes to give orders; the forensic lab guy Terence is a shabbily-dressed, glasses-wearing geek who really likes gadgets; and Gwen, the receptionist and evidence clerk is blonde eye candy who presents all the professionalism (and age) of a Friday Night Lights cheerleader. Not exactly the most nuanced supporting cast in the world, and generally an unpleasant group of thinly-written characters. 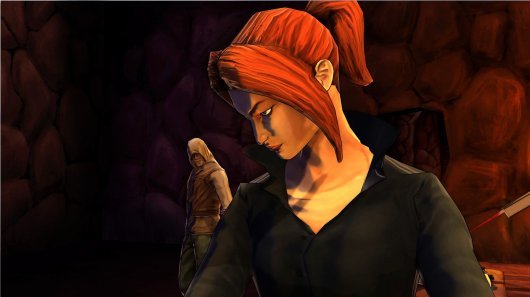 They're a well-drawn bunch, though; the art in Cognition is brilliant. The cel-shaded characters are gorgeously animated over equally striking painted 2D backgrounds. It is easy to imagine this is what the natural progression of Sierra's own classic adventures would have looked like after 20 years. There are some visual quirks in the character design—it's hard to look past the frozen cake-frosting that appears to have been used for female hair—but the art oozes dark style and boasts a number of very impressive cutscenes that unleash the insanity in Erica's mind at pivotal gaming moments, to great emotional effect that surely must make Jane Jensen proud. Dark locations such as the cemetery and crime scenes feature excellent moody lighting, and other areas like the antique shop and a suspect’s apartment contain painstakingly vivid background details. The game has over 20 backgrounds in total, which are uniformly impressive.

The music, an original score by Austin Haynes (whose soundtrack to The Silver Lining was an extremely impressive and varied opus that this writer often uses as background reading music), is fantastic, providing raw and unsettling darkness and quiet moodiness, hitting all the right notes at the right time. The voice acting also consists of mostly strong, capable actors making the best of the script they were given. The crucial choice of Erica's voice was well-cast as Raleigh Holmes, daughter of Jensen's husband Robert Holmes and herself an accomplished and recognized voice and musical talent. She shows impressive emotional range and manages to make even some silly dialogue carry great heft at crucial times. If this is the standard set by their commercial debut, Phoenix Online has put together a technical team that promises great things to come.

While its menacing violence may be on the strong side, Cognition is a game well-suited for those with limited adventure experience. There are little features like the ability to highlight all inventory items that are allowed to be combined and a pop-up menu icon that indicates when an object can be used with inventory that save a great deal of excess clicking present in many adventures. The game also includes an excellent hint system (in the well-designed form of a text message conversation with your father) that will render any external walkthrough useless. There are no real action sequences, and only one scene that can lead to death, which can be rather quickly undone. 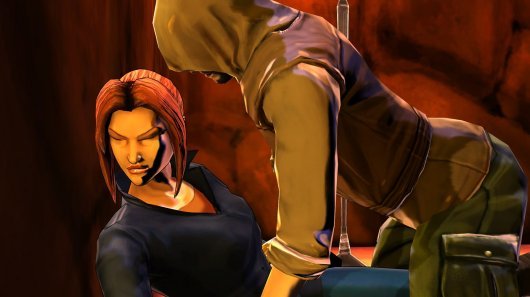 Don't expect a game made by Sierra devotees to avoid an opportunity to drive you puzzle-mad, though. The game is bloated with instances where puzzles are artificially inserted into important moments just to make sure you feel like you're solving something. Of particular annoyance is a mid-game interrogation sequence of a hungry homeless man with crucial information about a murderer; the hunt to locate and acquire the correct food for his apparently very restrictive palate feels like its own 'Quest' game. Also somewhat laughable is a puzzle that involves breaking into your boss's office in plain sight of the entire floor of detectives as though no one would notice. Hearing the main character narrate her own actions with a sigh and "There goes your badge, Erica" doesn't make the entire situation any less absurd. These types of puzzles are not very difficult (almost no puzzle in the game is) but they too often strain the bounds of real-world credibility, which is acceptable in the Land of the Green Isles, less so in the midst of a Boston murder investigation.

With its occasional descent into one-dimensional caricatures for supporting characters, immature dialogue, and implausible puzzles, the first episode of Cognition doesn't quite fulfill the series' aspirations of greatness just yet. But even with these early reservations, I really enjoyed almost everything about The Hangman. It is soaked with gloomy style, is gorgeous to look at and listen to, sets up its plot points with great precision, and takes off in the third act as it builds to a huge climax with a disquieting final shot that makes me genuinely eager to play the second episode. That's about the highest compliment you can pay to the first in an episodic series.

The ambition of César Bittar must also be praised; he is credited as not only Phoenix Online's CEO, but sole designer, writer, director, and producer of this episode—perhaps to the game's detriment if the sometimes uneven script was not externally edited. Bittar has already stated that other designers will helm, or co-helm, future episodes, and the influence of a larger pool of talent will hopefully further improve on this highly promising beginning. With some storytelling and dialogue enhancements added to the already impressive technical achievements, there is no limit to what Phoenix Online may be able to accomplish in future episodes.

WHERE CAN I DOWNLOAD Cognition: An Erica Reed Thriller - Episode 1: The Hangman

Cognition: An Erica Reed Thriller - Episode 1: The Hangman is available at:

Though flawed, the first episode of Cognition leaves a great final impression and sets up a series that could become a major achievement for episodic adventure gaming.

GAME INFO Cognition: An Erica Reed Thriller - Episode 1: The Hangman is an adventure game by Phoenix Online Studios released in 2012 for Android, iPad, iPhone, Mac and PC. It has a Stylized art style, presented in Realtime 3D and is played in a Third-Person perspective.