We get a small commission from any books sold.
Written by
Merlina McGovern — November 5, 2012

Once upon a time in the deep dark woods, there lived a little girl, her grandpa, and of course a wicked witch. It's a familiar-sounding premise, but right away Krams Design’s episodic debut of Anna’s Quest begins to separate itself from so many fondly remembered folktales from childhood. This classic point-and-click adventure takes players through a fun, evocative story involving an unflappable heroine, Anna, and her search for a cure for her ailing grandfather. But before you start thinking about airy castles and happily ever afters, prepare yourself for an oddball assortment of themes that touch on telekinesis, old witchcraft school chums, dungeons filled with the unappetizing results of sorcery and mad experiments, and more. Though light on playing time, Vol. 1 – Winfriede's Tower turns up the charm in the animation, acting, and storytelling departments – all the better to catch you off guard with a healthy dose of black humor and some spooky scares.

Anna, world weary beyond her years, lives with her cautious grandpa out in the woods. He warns Anna away from exploring the dark forest too much; very wise counsel. Unfortunately, after he falls ill she’ll have to do just that, with all of the requisite consequences. Her journey immediately runs into a roadblock when she is kidnapped by an evil witch who whisks her away to a tower hidden in the woods. And here is where the typical fairytale gets twisted. Anna finds herself locked in a room that doesn’t fit your typical image of a prison cell. At first glance, it’s filled with stuffed animals, art supplies, and a lumpy bed; not a four-star hotel, certainly, but cozy enough. However, you'll also notice a speaker and intercom system, a strange machine with a scary-looking contraption that attaches to your head, a large Teddy bear that has rather more personality than your run-of-the-mill child’s toy, and an unappealing bowl of green, chunky goo that appears to be your daily meal.

Set against this bizarre menagerie, Anna’s main objective is to find a way to escape from the tower. As you aid her in the attempt, you’ll scroll over objects to find anything that might help you with the task. When the cursor turns yellow, holding down your mouse click pulls up four options: view, talk to, pick up and (once you’ve discovered it) use your telekinesis power. Oh yes, that’s right – little Anna can move things with her mind. Delightfully, you’ll be able to interact with most objects in your environment, with helpful and oftentimes entertaining observations from Anna. She moves easily from commenting on the way a rug ties the room together to the creepiness of the witch spying on her to the practicalities of being locked in a room with odd machinery: “It is a very comfy chair. . . I’d use it more if it weren’t for the scary machine hanging above it.” However, if you aren’t able to interact with something further, the reliance on the same responses over and over can be quite annoying. 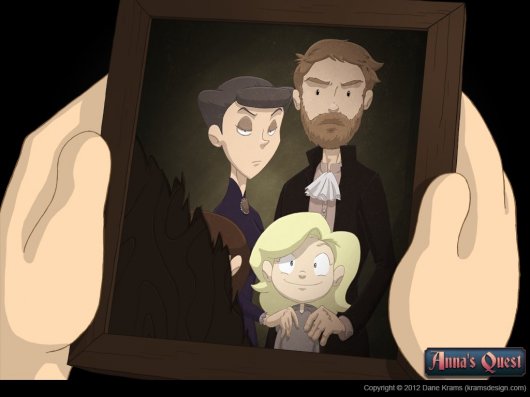 When you pick up an item, it will go into your inventory, which you can easily pull up by right-clicking. Once in the inventory, you can click and hold to obtain the same four options for each item, and you'll occasionally be able to use some items on others. There is no hint system to rely on here, but although I found some combinations challenging, they usually make sense and follow the game’s internal logic (being a world of magic and machines and miniature dragons powering generators via a hamster wheel).

These inventory obstacles make up all of the gameplay outside of exploring your environment and chatting with the few denizens inhabiting the tower. Being locked in, naturally you’ll have to find keys to locked doors, along with discovering ways of appeasing ornery guard cats, helping out ghosts in need, and even feeding some vermin in order to make your way through the tower. In addition to finding an escape path, you’ll also be tasked with creating a protection spell to keep the witch at bay. And this is no simple hocus pocus incantation. The multi-step spell has you searching the tower high and low for all manner of ingredients. You won’t find any standalone logic puzzles along the way, unless you count one very simple puzzle that involves using your power to open up an unconventional container in a specific order.

Anna's Quest is rendered in a simple cartoon style, but it is extremely charming. The initial bedroom with its primary-colored furniture and plush stuffed animals gives way to darker rooms awash in grays and sickly green hues as the heroine travels deeper into the bowels of the witch’s tower. There aren't very many scenes to explore, but various little touches add character, like a deep red carpet that when lifted shows a drain used for ... some type of fluid, perhaps bodily? A bookshelf in a dungeon contains neatly folded spare gowns beneath chicken feet, dead reptiles, and spellbooks. These macabre environs make a perfect backdrop for Anna in her short pink dress with white frills, her spindly legs ending in black Mary Janes, and her bobbed hair pulled back by a little pink barrette. 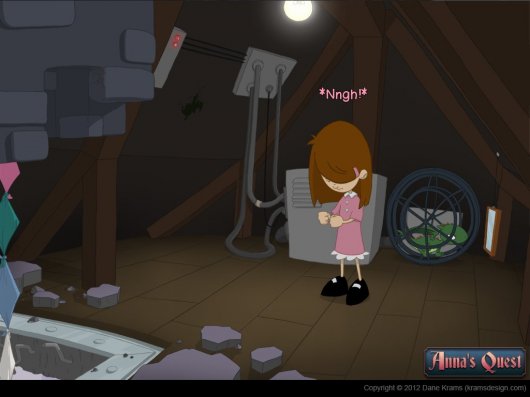 The in-game animations are smoothly interwoven into the action and are quite entertaining, like when Anna crouches in concentration, balls up her fists, and tilts her head forward when using her telekinetic powers. When Joringel, a sneaky ghost, first appears on the scene, his spirit floats up from a skeleton tethered to a wall. As he attempts to pull away from his bones, you’ll hear a little boing as he grabs the bottom of his ghostly form and pulls, only to have it snap back to the skeleton. The designer has also employed quick cuts to ghosts suddenly appearing, which caused me to startle quite a few times. This effective scare tactic is also used in the game’s sound work. You’ll be quietly exploring a room when a crackle of static and a loud voice break in over the intercom. I found myself jumping at the witch’s sudden vocal intrusions. Ambient sounds also add depth, like the metallic ting when Anna uses her powers to bend a spoon or the creak of an old chair when Anna sits in it.

Setting a soothing background is an enjoyable musical score, with its drums, violins, and the jingle of small bells. It is subtle and memorable at the same time – no mean feat – and adds just the right hint of discordance to suit the macabre setting. The voice acting is even better. Anna’s high-pitched yet soft voice is modulated perfectly. You could imagine her asking a Tasmanian devil to wait just a moment while she finished her tea. A perfect foil for Anna, Winfried the witch bounces between hysterical anger and soothing cajoling in an instant. Even the secondary voice actors are excellent, from Joringel, a ghost that’s apparently shadier than usual, to Ted, the talking bear with an Australian accent and a penchant for hiding his eyes behind his paws, to a magic mirror who speaks only in riddles.

When you converse with these characters, you’re given a dialogue box with multiple options to choose for Anna, ranging from childishly quizzical to just jaded enough. There isn’t any trick to the dialogues – you just need to go through them and sometimes pay attention to see what you need to do next. I thought at first that chatting with Ted would provide clues, but he never went beyond obvious observations such as telling Anna that perhaps she should try to look for a way to escape the tower. 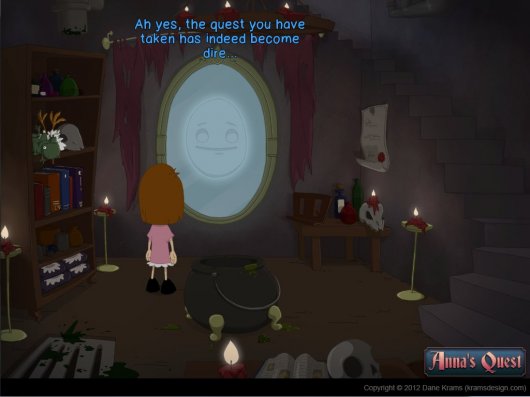 Tinkling music, talking teddy bears, and magic mirrors all juxtaposed with slime pits full of disarticulated skeletons and giant rats put me in mind of little girls wearing pink shirts covered in skull and crossbones. This 2½ hour game introduces you to a tangled fairytale world and its wonderful set of characters, most especially Anna. Here’s a child who can barely pronounce telekinesis, but sighs nonchalantly when she realizes she has to fish around in green muck or figure out a way to remove a clump of hair from a sink drain. She remains unruffled, but quite apologetic, when she realizes that she has to abuse a poor stuffed animal to achieve her objectives. I’m eager to see how she’ll handle the next set of adventures thrown her way.

During this opening episode's short playing time, indie developer Dane Krams manages to hint at deeper, more mysterious connections. You stumble upon a family portrait with a woman who appears to be a much younger Winfried; the portrait is incomplete, however, leading you to question who the missing family member is. You’ll also discover hints of the witch’s youth, from her interactions with Joringel long ago at a school for witchcraft to a science fair certificate for a Hans Lind, who is never identified in this chapter. All of these hints reinforce the fact that escaping the witch’s tower is only the first part of Anna’s story, who still has her grandfather to attend to.

Inexpensively priced and available for download from the developer's website, it’s really the little touches that make Vol. 1 – Winfriede's Tower. I felt the hairs on my arm stand on end when Anna walked to her room and saw Ted in a particular stance, presaging something creepy. There's even a fun little detail to reward watching all the way to the end of the credits. Although the series will continue through another two parts, the ending to this game is quite compelling and dramatic in its own right. The acknowledgements cite the Brothers Grimm and Hans Christian Andersen as inspiration for Anna’s Quest, but I found this story to be entirely the developer's own, with a great set of characters, most especially Anna. I can’t wait to go on more quests with her.

WHERE CAN I DOWNLOAD Anna’s Quest: Vol. 1 - Winfriede’s Tower

Anna’s Quest isn’t your grandmother’s fairytale, but you’ll have a spooky good time exploring an off-kilter world and getting to know its strong-minded young heroine.

GAME INFO Anna’s Quest: Vol. 1 - Winfriede’s Tower is an adventure game by Krams Design released in 2012 for PC. It has a Stylized art style, presented in 2D or 2.5D and is played in a Third-Person perspective.