Review for The Walking Dead: Episode Four - Around Every Corner

The Walking Dead: Episode Four - Around Every Corner  (2012)

We get a small commission from any books sold.
All Bitmap Books
Written by
Reece Warrender — October 15, 2012

Distraught and broken from the previous episode's tragic events, The Walking Dead's remaining survivors face multiple threats as they explore the city of Savannah, desperately clinging on to any remaining threads of hope. In Around Every Corner, not only must you continue to fulfill your role as the diplomat trying to please all parties, you now become the resident gunslinger and lumberjack as you shoot and hack your way through hordes of zombies in order to ensure the group's survival. It's the most action-oriented episode so far, and comes at the expense of character development among a group of relative strangers, but it all builds up to a small glimmer of genuine promise... which is then abruptly snuffed out in a startling cliffhanger that outdoes any other to date. This is the beginning of the end, and no-one is safe.

The fourth episode begins with Lee and the rest of the ragtag group having just arrived in Savannah to pursue Kenny’s extremely optimistic plan of finding an abandoned boat at the city port, while hopefully locating Clementine's missing parents in the process. In true Walking Dead fashion, not only won't escape be nearly that easy, the crew soon find themselves surrounded by zombies drawn by the untimely, intentional ringing of a nearby church bell. Spotting an unknown figure dashing away along the rooftops, it's clear that you'll need to concern yourself both with the undead and the living who are seemingly trying to sabotage your plans.

Fleeing to a nearby abandoned house provides temporary shelter, though in the resulting chaos you’re force to leave someone behind and find that another person's injury has become an immediate cause for concern. Everyone has their own needs and opinions on what to do next, and Lee finds himself once again stuck in the middle between needing medical supplies and proceeding immediately with the search for a boat, while Clementine is a constant cause for caution, her safety falling directly on your shoulders. 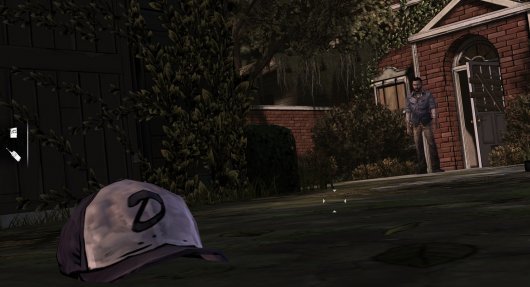 A lot of your choices this time result in the same outcome no matter which direction you take, but the illusion of directly affecting the plot progression is extremely convincing, and often how you’re perceived by the group – and Clementine in particular – is the primary concern. However, there are multiple moments in which your decisions hold greater importance, from determining someone's survival to a personal matter that could drastically impact the episode to follow.

Between zombies, mysterious saboteurs, an unknown male voice on the other end of a toy walkie talkie, critical injuries, a guilt-ridden Ben, and Kenny on the verge of exploding, your shopping list of problems has grown considerably, made all the worse by being in unfamiliar territory. Conflict truly lies around ever corner, both outside and within. Clementine has a newfound eagerness for additional responsibility and freedom, and given the additional risks and dangers the new city provides, each and every choice regarding her safety feels like it carries exceptional weight.

With this heightened sense of danger comes a leap in action sequences. Where previous moments of first-person shooting were sparse, here you’ll find numerous times where Lee seemingly turns into Rambo and picks off groups of zombies with headshots. At one point you'll even find yourself ascending a staircase filled with the undead, slaughtering them with a hand axe. It sounds tense, and there are certainly moments of stress involved, but the ease with which you can dispatch waves of walkers hampers the sense of dread and fear typically found when a zombie enter the scene. At this point in the series, increased violence adds some welcome gameplay variety, but becoming an action hero breaks the illusion that you're in any real danger. 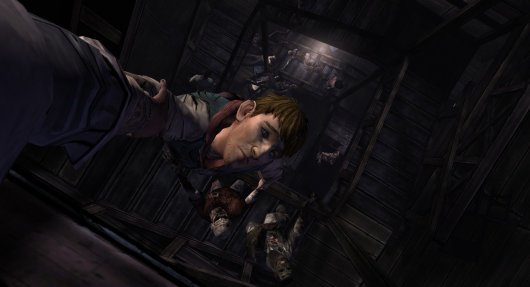 Outside of the action sequences, which once again include some simple Quick Time Events, there are a handful of environmental puzzles in which Lee needs to locate and combine an item or two in order to progress. Such tasks are so straightforward that the puzzles typically solve themselves – one of which actually does, as a combination code you find never needs to be inputted manually. As usual, the bulk of your time will be spent exploring a bit, engaging in conversation, making snap decisions and enjoying watching the events unfold.

Unfortunately, the faster pace includes a number of throw-away characters that come and go with a moment's notice. There's a kind-hearted old doctor named Vernon who lends a helping hand, while an extremely agile young woman named Molly teases her background story incessantly (which is extremely obvious to the player but apparently not to an oblivious Lee), along with a handful of other smaller roles. These new characters don’t feel misplaced, but their introduction so soon after a major turnover in the core group leaves all of them feeling sorely under-developed. There's really no chance to form an attachment to the shallow generic couple Omid and Christa, the bumbling awkward teenager Ben, or the abandoned homeless man Chuck, all of whom could have benefited greatly from more screen time. Whilst there is no-one I would like to see come to harm, I feel far less connection to those who remain than those I already lost.

That said, the original trio of Lee, Clementine and Kenny continue to be developed brilliantly. Whilst Kenny is certainly a colossal pain who rarely shows me any appreciation, he’s a pain that I still want by my side, and Clementine’s character has been handled with such grace that the bond between her and Lee feels completely genuine, which makes me carefully consider every single word I say to or even around her. At one point I stumbled upon a picture drawn by Clementine and gave out an audible “Aww”. This surprised me, and I realised then just how immersed I had become in the relationship between her and Lee, to the point where it extended to my feelings towards the child. I don’t recall ever having such a sentimental reaction in another game over something so fickle and silly as a drawing. 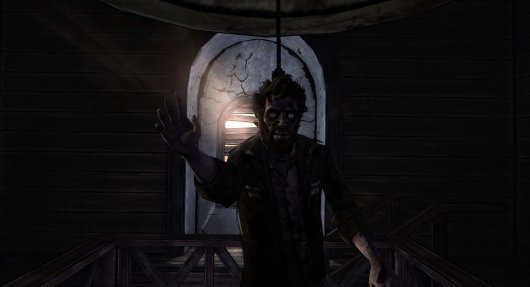 A lot of this is thanks to the spectacular dialogue, but it continues to be backed up by brilliant voice acting and great background music during emotional scenes that build upon the immersion. I was also pleased with the improvement in camera control, with less stuttering and awkwardness this time around. There was the occasional hiccup with lip syncing but ultimately I noticed very few technical glitches; thankfully this episode recognised my previous saves, avoiding a repeat of the serious problem I encountered before. Visually it once again nails the familiar attractive graphic novel art style, and I’m still impressed by the lack of heavy asset reuse that has been so typical of Telltale's other episodic content to date. The new city, with its abandoned dock, underground tunnels, and particularly a school you occupy late in the story, is pleasing to explore and provides a nice variety of locations.

Past episodes have consistently crushed the hopes of the group, piling on one despair after another, and it’s in disrupting this formula that Around Every Corner shines brightest. Where Episode 3 was relentlessly bleak, this instalment tenuously builds the party back up with little rays of hope through much of its 3-4 hour playing time. There are even rare moments in which Kenny, a man who has lost more than most, is able to crack a smile. But like a roller-coaster making its slow, steep climb before plummeting mercilessly down the tracks, this fragile optimism builds towards a shocking turn of events in the final moments that sets up the cliffhanger ending superbly. The increased action and somewhat superficial group dynamics make this episode feel more like a prelude to the finale than a standout episode in its own right, but in that regard it's certainly done its job. Hats off to Telltale, as anticipation and excitement is at an all-time high in advance of the grand finale.

WHERE CAN I DOWNLOAD The Walking Dead: Episode Four - Around Every Corner

The Walking Dead: Episode Four - Around Every Corner is available at:

Whilst Around Every Corner relies a bit too much on action sequences and not enough of group-building with its new characters, it effectively manages to draw hope and desperation to new emotional highs and lows, ultimately ending with the most dramatic conclusion so far.

GAME INFO The Walking Dead: Episode Four - Around Every Corner is an adventure game by Telltale Games released in 2012 for Android, iPad, iPhone, Mac, PC, PlayStation 3, PlayStation 4, Switch, Xbox 360 and Xbox One. It has a Stylized art style, presented in Realtime 3D and is played in a Third-Person perspective.

What our readers think of The Walking Dead: Episode Four - Around Every Corner

3.5 stars out of 5
Average based on 21 ratings
Your rating