Death off the Cuff

Death off the Cuff – Remastered

We get a small commission from any books sold.
All Bitmap Books
Written by
Jason L Blair — October 8, 2012

“The text adventure is back” is a bold claim to make, especially for the first outing from a two-man indie operation. But CYPHER: Cyberpunk Text Adventure, a dystopian tale set in a retro-style view of the near future, dares to make that claim, and not without a certain measure of validity. Although weaknesses in the actual text prevent it from living up to its full potential, its attempt to add visual and audio immersion to the traditional formula is an interesting experiment that I hope we see more of in the future.

CYPHER presents a dark future in the classic sense. The city of NeoSushi (formerly Tokyo) is full of dust-choked skies, flying cars, and burning neon. The characters are straight out of the pulp fiction that inspired the cyberpunk genre's seminal works. Dogeron “Dog” Kenan, the hero of the story, is a two-bit criminal carrying a partial passcode in his brain after a mnemonic data transfer gets interrupted and he flees the scene. He doesn't know what this passcode is for or why people want it, but over the course of a single bad night he comes face to face with old friends, trigger-happy cops, and functionaries known as Retrievers who want to rip that code out of his brainmeat by any means necessary.

You get this all from a wall of text, as you might expect, but also through an inventive use of audio and visual additions that are perhaps CYPHER's greatest contribution to its genre. Throughout the game, you look at a screen split in two, with the story and input prompt on the left side and the other half reserved for the title's artistic displays. A full-color profile of the main character occupies the right-hand background. He spends his time smoking and gently shaking as rain patters around him. A thumbnail of your current location is present as well, though it's so small that its inclusion isn't helpful in navigating the spaces. As you acquire items, images of your inventory pop up. Some of these, such as a plasma cutter gained early in the game, hum and vibrate when activated in the text. The art is very good, with a nice pen-stroke quality and lots of flat colors with the occasional bright slash as befits the game's dreary streets and somber atmosphere. The sparse animations are a nice touch as well. 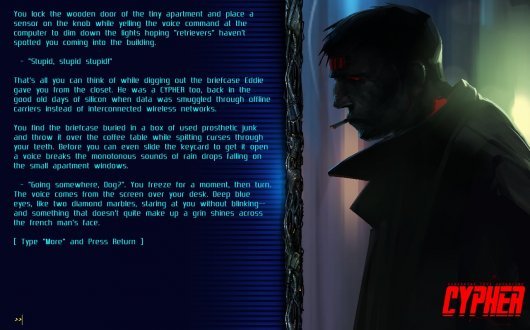 As with the visuals, the audio in CYPHER adds a lot to the experience. Ambient sounds not only stage each location but also help alert you to scene changes. When the heavy rain splashing against an apartment window turns into the whoosh and whir of rushing traffic, you know you have entered someplace new. The synth-orchestral music throughout the game is moody and dense; it would be right at home in Deckard's Los Angeles or Case's Sprawl. One very nice touch is how sounds accompany certain events in the text. When the cops show up, you hear banging on the door. As a hovercar spins out of control, the hum of an overworked motor fills the speakers.

As beautiful as the right side of the screen is, however, the text part of this text adventure is ultimately where the game falls down. It starts off well enough, as CYPHER's story is well-structured and begins with a bang. Dog, fresh from the interrupted transfer, frantically attempts to sort out what went wrong as snipers and Retrievers descend upon his small apartment. This hectic pace carries throughout the game, occasionally slowing down enough for some character-focused moments that explore Dog’s past and connections to some unsavory people. You’ll spend time in bars, sex dens, and seedy hotels as you stalk NeoSushi’s dark streets in an attempt to unravel the mystery.

Unfortunately, the story’s highs are mired by horrible editing and poor grammar. Flying vehicles are alternately referred to as “Hover cars” and “Hoovercars”, while verbs are often in the wrong tense and some word choices make it hard to tell if this is meant to be stylized speech or is just poor writing. This is doubly frustrating when you are relying on the text for direction on what to do next. A payphone is called a “paid phone” in one section, though referring to it as such in the parser prompts an error. For a game heralding that “the text adventure is back,” it is extremely disheartening to see the text given so little polish. 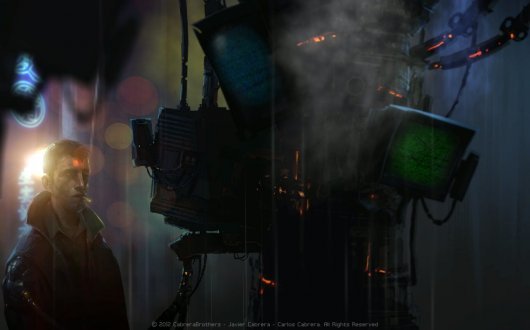 Unlike most adventure games of the past twenty-plus years, there's no pointing and no clicking in CYPHER. The top portion of the left-hand screen is dedicated to game prose and responses to your input. You interact with the environment and characters by typing commands such as “unlock north door” and “climb up ladder.” Navigating the world of NeoSushi and solving its puzzles sometimes require a thorough reading of the text in order to figure out your next move. More often than not, seemingly simple actions require an additional step to accomplish. For example, before you can order a taxi driver to land his cab, you must intimidate him. The puzzles are a mixture of inventory use and navigating dialogue and environments to figure out the sequence of events that will carry to the next scene and get you deeper into the story.

This is made unnecessarily difficult by the strict parser, and the fact that some commands have an unnatural structure. The worst offender is the “turn on” and “turn off” controls that require you to structure your commands as “turn videophone on” and “turn videophone off.” Typing “turn on videophone” prompts an error with no guidance as to what you did wrong. The instruction manual clarifies this but demanding your audience use grammatically-lax input is a severe misstep. There are also no abbreviations for commands. Later in the original text adventure era, commands such as “go north” and “examine door” were abbreviated to simply “n” and “x door”, but CYPHER offers no such shortcuts.

Bogglingly, while “save” is all that's required to save your game, you must enter “restore saved data” to load your last save—despite the command being listed as “load.” (Typing “load” brings up a warning that your current game will be overwritten and to type “restore saved data” if you really mean it.) 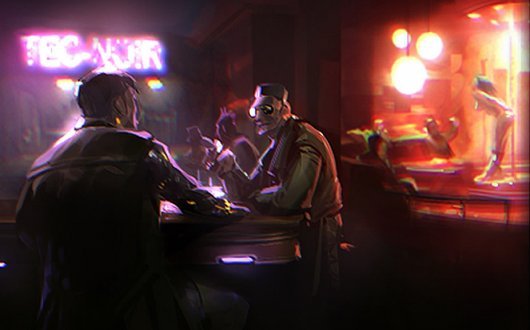 A nice addition to the traditional text input comes when talking to other characters. Beginning an input line with a character's name is enough to prompt conversation. For instance, by saying “Driver, I have a gun” the man behind the wheel of the taxi will respond. When this works, it's really cool. Even when it doesn't work, the reactions from the characters are often amusing. Another fun part is navigating the QRS-Code, which is the means by which Dog explores his internal memory storage. As a data courier, his brain is his briefcase but it's not just business in there. By using a proprietary list of commands, you control the QRS-Code and learn quite a bit about the main character's history by sifting through mundane remembrances—snapshots of a former life—in addition to grabbing hold of that precious passcode.

At the heart of CYPHER is a compelling game. The story has a lot of tense action scenes, cool noir-influenced dialogue, and archetypes straight out of its filmic inspiration, providing a nice return to both the adventure games and cyberpunk of decades past. The visual and audio elements add a lot to the experience as well. Putting on headphones and sinking into a chair to enjoy CYPHER's story rewards you with a few evenings of entertainment, provided you can look past its numerous typographical blemishes. Three versions of the game are available through the developer's website, each with a variety of “feelies” (printable PDFs) that present in-world artifacts such as a message from your pal Eddie, a flier for a capsule hotel, a paste-up for a pleasure booth, and much more.

Cyberpunk is one of my favorite genres and I was excited to see what CYPHER had to offer, but its lack of polish makes this hard to universally recommend. On the upside, the developers have been working hard since initial launch to update the text and have taken an active involvement with their fans and critics. That’s heartening to see, and my hope is that future updates help fulfill the game's promise. Even in its current form, this is an interesting experiment and gets some big things right, and I'm excited to see if this inspires other developers to try something similar. This first effort by the Cabrera Brothers won't be the game that singlehandedly drags the text adventure screaming into the future, but it may be pointing the way, so if you're into the aesthetic and think you can overlook its flaws, give it a try.

CYPHER‘s attempt to modernize the classic text adventure has a lot of interesting ideas, but the lack of polish on the text itself keeps the game from living up to its potential.

GAME INFO CYPHER: Cyberpunk Text Adventure is an adventure game by Cabrera Brothers released in 2012 for Mac and PC. It has a Stylized art style, presented in Illustrated text and is played in a None perspective.

What our readers think of CYPHER: Cyberpunk Text Adventure

While I agree with some of the points here, I really think the game is great and fun to play. I've been playing IF since A Mind Forever Voyaging and although I find the parser... Read the review »

Slight Flaws in an Interesting World

I just finished playing the game and really enjoyed it. I really enjoyed the layout and interface. This is the natural progression of Text Adventure games that was completely ignored back in the late 80's... Read the review »

Ok there are some grammar problems, but i read that the team that has developed the game are only 2 people + someone for voices and a guy that translated the game in english from... Read the review »