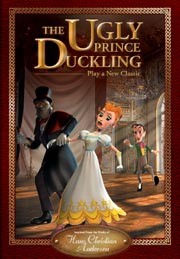 We get a small commission from any books sold.
All Bitmap Books
Written by
Berian Morgan Williams — March 16, 2007

What do you get when you cross a silent-type protagonist, a treacherous villain, a beautiful love interest, and a whole lot of kicking butts? No, it's not the latest Hollywood blockbuster, it's HANS CHRISTIAN ANDERSEN: The Ugly Prince Duckling.

Although similar in name to the popular fairy tale, The Ugly Prince Duckling is an original, fictionalised account of the early life of the famous Danish poet and storyteller himself, Hans Christian Andersen. The real Andersen was responsible for a number of well-known and enduring fairy tales, including The Little Mermaid, The Emperor's New Clothes, and The Princess and the Pea.

HCA opens with Hans Christian himself sitting in front of a puppet-theatre, narrating his life story as it's played out by "actors" on the stage, while his sidekick the Ugly Duckling cracks wise at his side. As the story begins, we see a beautiful princess leaving her 19th century castle home in Copenhagen on her 15th birthday to find love and excitement, and the king dispatching his trusted adviser, Councillor Dunkeldorff, to track his daughter down. Shortly afterwards we see a young Hans, dressed in peasant garb, departing for the big city. It is now that we gain control of Andersen, and our adventures begin. 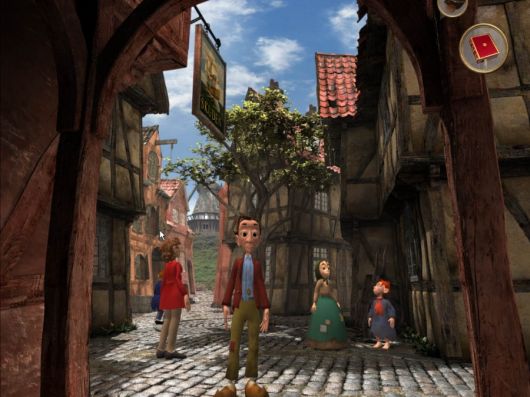 So what do these adventures entail? Well, this teenaged Hans has some vague aspirations to become famous in the theatre, but after meeting the aforementioned Princess early in the game, it becomes apparent that an evil is about to befall the land in the form of hordes of trolls, the leader of whom is after the Princess' hand in marriage. From this point onwards, it seems Hans' destiny is to save the Princess from the trolls, return her to safety (conveniently in another quarter of the city that someone of Hans' lowly position can't access), then attempt to better himself enough to enter said quarter. Doing so generally consists of Hans wandering from place to place, talking to people and performing odd jobs, until something happens to progress the storyline slightly; rinse, repeat. This basic pattern is repeated a number of times until the final showdown of the game. The game is divided into five acts, with each act being set in a different district of Copenhagen, with Hans having a higher social status in each.

The attempts to better himself is one of the more interesting, yet also most disappointing features of the game. Billed as 'Social Gameplay' by the developers, Hans' position in life's hierarchy is supposed to determine how people react to him, and what places he can travel to. This is partly true, but you never return to previous quarters once attaining a higher status, and aside from this linear progression from region to region, not too much changes for Hans. In fact, some of the characters wandering the streets in your current district were actually in the previous one too, and their reactions don't really change much, other than to say "ooh, lah-di-dah, look at Mr Rich Man", or words to that effect. You're either accepted by people from the start of the game in the poor quarter, or barely tolerated by the posh folk in the later sections. If they didn't like you to start off with, no amount of money is going to change their minds.

Aside from the small changes in response to Hans' class, characters don't have much of interest to say. Passers-by will repeat the same few lines of gossip over and over, with small changes depending on what's happening in the game. Important NPCs even refuse to talk to you any further once you've given them what they want, or taken what they have to offer. Surprisingly, Hans himself never speaks during the course of the game. People react as though he has addressed them with questions or comments, but no dialogue ever visibly or verbally comes from him. Being silent makes him a bit of a doormat (the Princess after whom he pines is not the nicest of girls), so Hans is never much of a player character to emphasise with. The NPCs aren't much better. Having nothing to say other than a bit of gossip, and quite often having no names, makes for a pretty flat set of characters overall. Well, aside from the merchant who sells "cakes, shoulder-pieces and carrots" -- she seems pretty interesting. 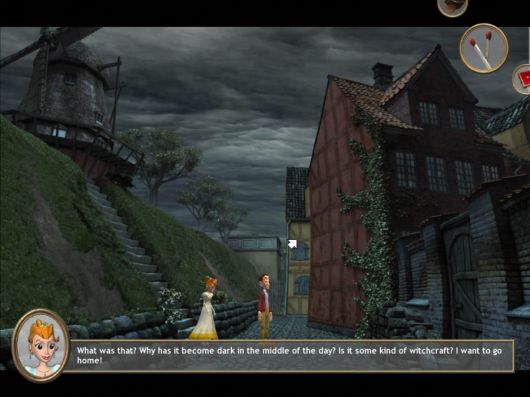 Making the story more appealing are a number of elements and characters from (or at least parallel to those from) Andersen's famous fairy tales. A principal part of the story is the Tinderbox, taken from the story of the same name, and other themes from that story are also used. Besides the Ugly Duckling during the narrative cutscenes, early on Hans meets the "Little Match Girl" and partakes of her wares. As the game progresses, many more of Andersen's stories are similarly referenced, either explicitly or subtly. A list of Andersen's fairy tales, with images from the game used to highlight where similarities occur, is available on the official HCA website. Personally, I came to this game not knowing much about Andersen's tales, so I didn't recognise many of the game's corresponding elements. Such familiarity certainly isn't necessary to enjoy the game as a standalone story. However, those better acquainted with Andersen's works should have fun trying to spot all the references.

So where does the kicking of butts come in? Well, Hans is very fond of using his boots to get his own way, be it in convincing a bully to change his ways, scaring livestock out of his path, or randomly kicking objects around him to get them to give up their stashes of coins (yes, apparently the streets of Copenhagen are quite literally paved with gold. Or at least copper and silver). The abuse of his surroundings aside, puzzles in HCA are pretty straightforward. They tend to be of the go-and-fetch variety, with these errands rewarding Hans with various things, whether it's a bit of copper coin or some important plot item. There is no option to combine inventory objects, so inventory puzzles merely involve applying items to outside objects. There are a few other types of puzzles, including a few simplistic logic puzzles and a handful of stealth sections. Adventure game purists fear not, however, as these simply require avoiding the patterns of some skulking trolls, with no real difficulty involved, and only the loss of a few coins if you fail. Overall, the puzzles posed little difficulty to me (and I'm anything but an adventure game prodigy), the only real snag being what amounted to a pixel hunt. With the overall lack of dialogue, the simplicity of the game, and relative lack of locations, most people should be able to complete the game in a day or two, covering 5 or 6 hours of playing time.

HCA features a familiar point-and-click control scheme, but there are a few other possible options. It is also possible to direct Hans with the keyboard, either in a character-relative or a camera-relative manner. With this method, Hans will turn or incline his head to look at items of interest, and an indicator icon will appear showing the action he can take. This works well enough, except that Hans needs to be standing in a certain small area for the possible action to become available. With the mouse method, item hotspots are visible from a distance, although the hotspots are still fairly small. The downside to the point-and-click method is that the game's pathfinding is atrocious, and Hans will constantly bump into random objects as he tries to reach his destination and come to an abrupt stop instead of redirecting himself around them. There is another method that involves holding the left mouse button, and moving the mouse to direct Hans. This could be preferable to some, since it offers better precision in moving Hans, but personally I prefer not to keep my mouse finger depressed at all times. The best way, I found, was to use the mouse to scour an area for possible hotspots, then to use the keys to move close to an area of interest. Unfortunately, the traditional WASD key setup is not available, and keys are not reassignable, so using the more awkward direction keys method is necessary. 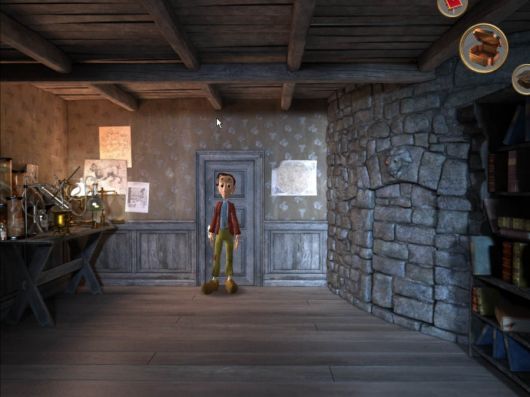 Where HCA really shines is in its excellent presentation. Backgrounds are done in high quality pre-rendered 3D, with some impressive Victorian-style backdrops. Characters are also good, but are more cartoony and caricatured, and the stylistic design is slightly at odds with the almost realistic scenery. Still, both of are of a very high standard, and work together well enough. Voice acting is generally positive, if rather stereotyped. Poor folk tend to be of the cheeky Cockney chimneysweep (think Oliver Twist) variety, or that of a rough north England coalminer. The richer people have upper-class English voices that people instinctively associate with the nobility. And there I was thinking Copenhagen was in Denmark... Music is also good, in a Romantic classical vein. I noticed a couple of Grieg compositions -- Morning Mood and In the Hall of the Mountain King -- in the mix. Overall the soundtrack is nicely understated, never dominating the action, making for a pleasant and appropriate background atmosphere.

While HCA obviously uses themes that are aimed at children, that's not to say that this is just a kids' game. While it's hardly an earthy, gritty, adult-themed drama, it's not quite as basic as children's games tend to be. A child probably wouldn't have any difficulty playing it, but an adult shouldn't be turned off buying it either, particularly if you have fond memories of growing up hearing Andersen's tales.

So is this game worth your money? HANS CHRISTIAN ANDERSEN: The Ugly Prince Duckling is enjoyable enough for the several hours it lasts, and overall it offers a nice playing experience. However, there also isn't a whole lot about it that jumps out and screams "PLAY ME!" It certainly isn't a bad game, but the puzzles are no great challenge, the characters are rather flat, and the controls are imprecise. If you're looking for a deep and difficult epic, then, you'd best steer clear. But if you're a fan of Andersen's tales, and want to see what can be made of them, by all means give it a try. And if you're content with a pleasant (and pretty) few hours of easy gaming, and don't go in expecting anything revolutionary or spectacular, HCA could suit you just fine. Like Andersen's fairy tales, it's short and sweet, and meant to appeal to the child in us all.

A short, easy game that unfortunately lacks the characterisation and depth that could have made it more interesting to a wider audience. Still, it should certainly be of interest to fans of Hans Christian Andersen's work.

GAME INFO HANS CHRISTIAN ANDERSEN: The Ugly Prince Duckling is an adventure game by Guppyworks released in 2007 for PC. It has a style and is played in a Third-Person perspective.

What our readers think of HANS CHRISTIAN ANDERSEN: The Ugly Prince Duckling