Review for Jazz and Faust

Adventure games by Saturn Plus

We get a small commission from any books sold.
All Bitmap Books
Written by
Tamara Schembri — September 8, 2002

Jazz and Faust seemed to me a more promising game than Syberia when all we had seen of either game was screenshots and previews. I’ve been looking forward to Jazz and Faust for a long time.

The visuals had a great deal of charm. They were inventive and imaginative, a world apart from the standard hyperrealistic fare. The premise seemed to mirror the originality and freshness of the visuals. There were two player characters, each with a story and agenda of their own. Once the player was finished with one story, he or she could play all over again as the other character – two adventures in one. The paths of the two characters would cross at certain points, offering a fresh perspective of the proceedings. So was this promising premise implemented satisfactorily; did it live up to my expectations?

While it remains an innovative and highly laudable idea which I hope will one day be put to better use, in Jazz and Faust it fails to be more than a misguided gimmick. The ‘two adventures in one’ angle fails because even with this feature, the game is extremely short. Finishing Jazz and Faust with one character (roughly half the game) takes no more than four hours. 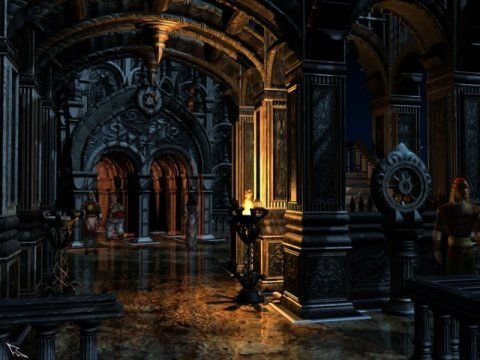 It is partly due to this that the game does not deliver with the implementation of the two characters’ fates intertwining. For that to work as an interesting device, the game would require depth of characterisation and plot; characters and events the player really cares about. Unlike many other adventures, however, Jazz and Faust lacks that sophistication. The characters feel wooden. We don’t know about their aims, hopes, dreams and fears. There is no indication in-game about what makes them tick. The game world does not feel like a living, breathing world – it’s one-sided and very clearly artificial. Incidentally, one alarming indication of how little effort has gone into this, is that the back story is only properly explained in the manual. While there is some reference to it in the opening cutscene, players will be at a loss unless they read the manual.

The back of the box proclaims, ‘Embark on the most challenging adventure of your life.’ Is this accurate? Perhaps, but for all the wrong reasons. While the puzzles in themselves are fairly easy, Jazz and Faust can be a frustrating game to complete. It is overly linear, with certain tasks only possible to complete after activating a trigger – which often has absolutely nothing to do with the action in question. The game’s logic is often inconsistent. This makes it, if not difficult, often frustrating to complete without a walkthrough. 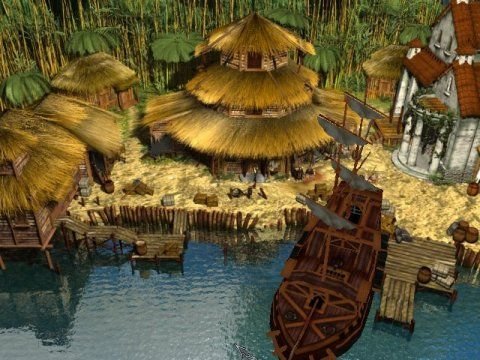 When it comes to the little details in Jazz and Faust, there is much to irritate. The text is often badly translated and the voice acting is haphazard, ranging from adequate to pitiful. Inconsistencies in the story and logic are painfully evident. The ‘look’ function is woefully underused. When an object is, or will be usable in the future, it is impossible to look at it – objects have only one possible function assigned to them. Only unimportant objects can be examined, and not very many of them either. This is a pity as it could have contributed to a sorely needed feeling of immersion. Another thing that annoyed me was when you acquired an item required by a character to let you advance or pass on some information. Talking to the character in question would result in ‘I won’t help you until you give me object X’, or some variation on the theme. You’re required to manually take the object in question out of your inventory and give it to the character, otherwise the game won’t recognise that you already have it. These are little things, but lots of minor niggles inevitably result in major dissatisfaction.

Why excel when you can scrape through?

I don’t wish to give the impression that I hated Jazz and Faust, or that it is a bad game. However, the developers have truly put little thought in producing a superior product – the game is not bad, but it excels in mediocrity. There are games which are far worse, but it is games like this that make me angry, where every aspect is done well enough to be passable, but not to shine. It’s exactly the kind of game that ensures the genre will never advance. If you’re desperate for another adventure game, this could be the one for you. Otherwise, there are far better examples of the genre out there.

Mediocre at best. Buy it only if you're desperate for a new adventure game.

GAME INFO Jazz and Faust is an adventure game by Saturn Plus released in 2002 for PC. It has a Stylized art style and is played in a Third-Person perspective. 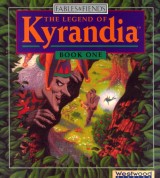