Beavis & Butt-head Do U. review

The premise of the latest Beavis and Butt-head game is to complete a field trip to the local college as fast as possible in order to get to the party afterward. The party, as the instruction guide tells you, is where the guys need to pick-up chicks, or as the characters utter endlessly "do college sluts." Of course, perennial do-gooder Mr. Van Diessen has told the boys they have to visit a number of various classes on campus and have the respective teachers sign off for them. This begins Beavis and Butt-head Do U., as each teacher has a different task for the boys to accomplish before they will sign.

Beavis and Butt-head is played from a third-person perspective so that the player can always be viewing what the boys are doing on screen. There are a number of times in the game where cartoon animation has been inserted for the sake of entertaining the player with such Beavis and Butt-Head staples as "Hey Beavis, you want to pull my finger?" The game also comes equipped with a very easy to use point-and-click interface with the cursor indicating whether an object or player can be used, spoken to or examined. There was only one environment I had to do some pixel hunting in to find a needed object. Besides that, I found that most items were easily found and used.

This will not be the type of game played by those looking for three-dimensional, fully-explorable environments, as it has none. In fact, movement is confined to the four cardinal directions. The graphics are 2D slides that change with the direction the character moves, and they are very simple, in keeping with the theme of the TV show. There is not much of a soundtrack, with the exception of an in-game selection of heavy metal music. This game certainly did not break any boundaries in art and style, but it does stay true to the vision of the show, including the voicework of the boys provided by series creator Mike Judge. 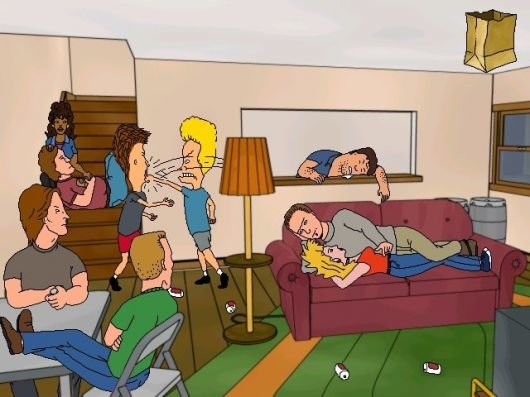 Beavis and Butt-Headis really an inventory-based rather than puzzle-based adventure. The game requires the player to successfully pick up objects in one environment to be used in another as the game progresses. Some items must be combined, but most of the time the objects needed are easy to find and it is apparent when to use them. This is not a very long game, in large part due to the simplicity of the challenges the game puts forth. As first I thought this was a weakness of the game, but I now think it is due to the nature of the characters: they are simple so the games are simple as well.

I am not a fan of Beavis and Butt-Head, and I don’t think that playing this game is going to make anyone else a fan. However, for the stalwart fans of the series, this game is probably a little bit of heaven. I found most of the storyline and challenges too simplistic, but that is not why someone will buy this game. They will buy this game because, for all its shortcomings, Beavis and Butt-head Do U. gives you a solid dose of the boys up to their old tricks, full of snide remarks and toilet humour, which is what made the show a hit in the first place.

Only for fans of the series, other gamers will find it heavy handed and superficial.

What our readers think of Beavis & Butt-head Do U.