We get a small commission from any books sold.
All Bitmap Books
Written by
Chris Pickering — February 10, 2006

There are far too few examples of excellent games based on movies. Despite the huge back catalogue of films at developers' disposal, we still find ourselves drowning in a sea of uninspired action titles, based on low-brow Hollywood blockbusters. But despite this unfortunate situation the game industry finds itself in, a few instances of a developer really utilising a license to the full do exist. Hence, I present exhibit A: Blade Runner.

As a film, Blade Runner is a major cult classic. Despite being well over twenty years old, it still maintains a huge following thanks to a setting that is anything but dated. The movie's grim, neon-obsessed metropolis of 21st century Los Angeles serves as the perfect setting for all our pessimistic dreams of the future.

Thankfully, Blade Runner the game doesn't at all attempt to merely mimic the events of the film. Being set to run concurrently with the movie, you find yourself in control of a different Blade Runner, Ray McCoy. With replicants (or "skin jobs" as they're commonly referred to throughout the game) illegal on Earth, the Blade Runner's job is simple. Upon the detection of any trespassing replicant, orders are to shoot to kill. McCoy himself is a mere rookie. It's only due to a recent influx of replicant detections that you get the opportunity to investigate a particularly vicious case of animal murder, which acts as a leisurely introduction to the game's controls. 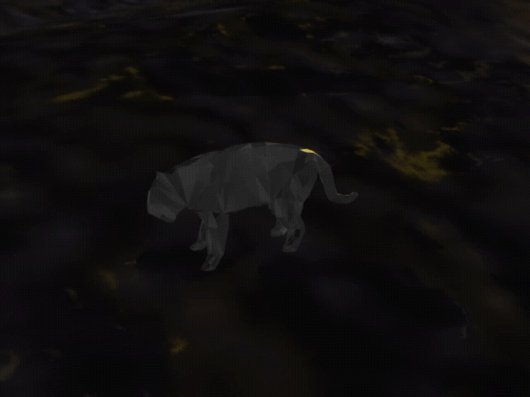 First impressions are good. They're very good indeed. Sharing the same environments as the film means that similar neon-lit backdrops are inflicted upon your eyes once more. It's only in places where you'd expect the setting to feel dark, dingy and lacking in colour that the feeling occurs. Despite the relative old age of the game (originally released way back in 1997), the graphical quality and background detail are quite impressive. Each character has an entirely unique design, and are all animated with extreme care and skill. However, they do naturally show their age with a hefty chunk of pixelation, especially when they're towards the front of the screen. The few cutscenes that occur not only do a terrific job of progressing the story and fleshing out characters, but also visually impress. Voice acting rarely drops below exceptional; nor does the music, which shows off just what can be done when you don't rely on the pop chart's flavour of the month. The Vangelis-inspired aural accompaniment, which occurs only at opportune moments, is a delight to hear.

One of Blade Runner's huge plus points is its ability to make you question your morals. Though the storyline is necessarily linear, choices offer themselves up at frequent intervals. Do you immediately shoot and kill a fleeing suspect who just may be a replicant? Or do you wait until you're able to administer the Voigt-Kampff test to the suspect before making a decision? Asking a sequence of low, medium, and high intensity questions, the suspect's answers and reactions to questions go a long way to producing an accurate overall response, and declaring whether that suspect is indeed a replicant or not.

The storyline twists and turns constantly, with the next big sweeping change that completely skews your views of the world only a few moments away. You'll no doubt come to suspect almost every character of being a replicant, with suspicion placed upon yourself in one particular instance. Certain choices you make throughout the title will change the way the game progresses, causing different conversation trees to appear, and certain characters to appear in different situations or disappear completely. It may not be entirely freeform, but the structure gives you enough leeway to try out most of the options you could ever wish to attempt. 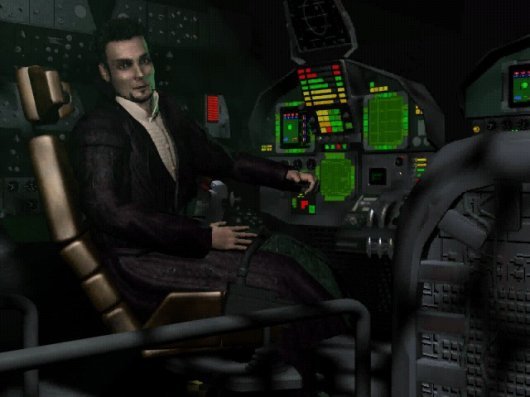 One particular game design point -- one which usually feels too tacked on to have any worth, the multiple ending -- is worked exceptionally well here. Instead of merely a good and bad ending, there are quite a few in Blade Runner, with branching paths leading you there. Each of the numerous choices throughout the game has its own moral implications, and may even cause you to think a little differently in the future.

A lot has been made of the game's "real-time" environment, though unfortunately this proves to be one of the game's biggest drawbacks. While the game itself is not timed, Westwood was keen to emphasise during development that Blade Runner would play out with characters moving around the game universe, and requiring you to perform 'replicant retirement' in real time. Being able to ready and fire your weapon at any moment, obviously there are instances of firefights that occur. However, far too frequently a character will immediately fire upon you, before you even get your bearings in your immediate surroundings, causing McCoy to die and forcing you to start again at your last save. Though it may be realistic, it's perhaps something that would have benefited from a slight tweak of the gameplay mechanics to ramp up the fun factor. How often these firefights occur entirely depends on your previous actions. As mentioned earlier, the choices you make impact the actions of characters further on in the game. However, for the majority of the game you'll progress at a leisurely pace, pointing and clicking your way to discovering clues with a context sensitive cursor that lets you control movement, examine objects, and initiate dialogue from your third-person perspective.

Once a piece of information that's sensitive to the case has been discovered, it'll automatically be added to your KIA (Knowledge Integration Assistant). A quick key press is all that's required to show all the information you've gathered, with information on every crime you're investigating and each suspect involved. Clues for each are even put into replicant and non-replicant categories, giving you hints towards that character's orientation. You can also upload the information stored on your KIA to the police headquarters' mainframe computer, updating the main database. Even clues that other Blade Runners have discovered will be added to your own personal information base, sometimes giving you a helpful hand if you're stuck with what to do next. At the headquarters, you'll also discover the Lab, run by Officer Dino Klein, who will analyse all evidence you've updated and provide you with detailed information. Plus you'll have access to an Esper (and another in your apartment), which allows you to examine photos, zoom in, and discover well hidden clues. Though difficult to use at first, you'll soon be zooming in on areas of interest and locating clues with ease. 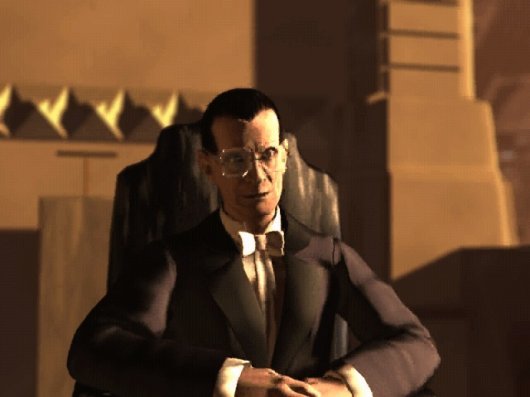 Unfortunately, too little attention has been paid to including any kind of puzzles in your investigation, as there isn't much thought needed to progress through much of the game. Though searching out clues and information is a necessity, it's far too automated for its own good. Simply clicking on every available option on screen is usually enough to progress to the next area, leaving those with little idea on what's happening an easy way out. A few relevant puzzles could have easily increased the challenge and added an extra couple hours of play to a game whose four CDs will only take a single night or two to complete. However, it's to the designers' credit that you'll be particularly eager to start up once again straight away, in order to try out a different path.

Blade Runner does suffer from some unusual elements of gaming design, as the sometimes difficult action sequences and short term lifespan of the game may put some off. However, the glorious aesthetics, intriguing storyline, and well implemented controls all add to a title that not only Blade Runner movie fans will wish to experience, but also anyone at all interested in adventure games. Those who refuse to try due to those few faults are missing out on a sublime gaming experience. No, it might not be perfect. But who wants to replicate perfection?

Blade Runner is available at:

A magnificent title. One that stands in the top echelon of adventure titles despite a few design-based flaws.

GAME INFO Blade Runner is an adventure game by Westwood Studios released in 1997 for Linux, Mac and PC. It has a Illustrated realism style, presented in Realtime 3D and is played in a Third-Person perspective.

What our readers think of Blade Runner

Man, the second half of the Blade Runner game was so tedious.

Don’t get me wrong, the game starts nicely and it has this beautiful Vangelis music but then it goes on filling up your journal with tons of information and the map with dozens over dozens... Read the review »

This is a really good companion experience to the 1982 film. Made in 1997, this game perfectly captures the feel of the Blade Runner world that the film portrays—and that's no easy feat. You play... Read the review »