We get a small commission from any books sold.
All Bitmap Books
Written by
Tom Arbour — September 23, 2002

Computer games, be they adventure or otherwise, have been placed in nearly every setting under the sun, from New Orleans to the land of the dead, but I believe French publisher Microids is the first to take us to India.

“Dearest Fred, I’m leaving you. Don’t try to get in touch with me.”

Road to India begins with Fred Reynolds, our protagonist, exchanging goodbyes with his fiancée Anusha, prior to a flight to New Delhi where she is to meet her family. Some time later, Fred receives a Dear John letter from her, saying that their wedding is off, and he should not try and reach her. Naturally, as any good husband-to-be would do, Fred hops aboard the first plane to India to find Anusha, and to determine why she has called off their wedding.

Road to India’s story, while fairly simple, is quite compelling. The player is motivated into discovering exactly why Fred’s fiancée has left him so suddenly, and how an Indian movie star’s recent disappearance is involved. Most of the plot is kept secret up until the very end, with an occasional tidbit offered here and there. 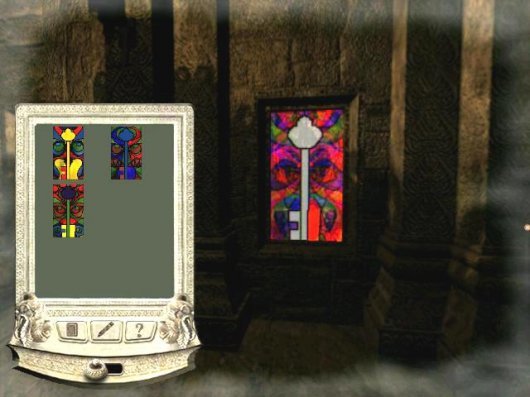 What adds to the game’s appeal is that it takes the player through two distinct worlds: the real India, with dark and dirty back alleys, and the idealized dream-like India, with bright, pastel colours. Throughout play, Fred moves between these environments, and this keeps the story from going stale.

You’re kidding? The monkey can do that?

Core gameplay is standard fare, utilizing a point and click interface in the first person, moving between “hubs” a la Myst. We’re offered the ability to pan the camera full circle, and even up and down, making it necessary to fully explore each scene, including the ground directly below you, and the sky above. You’ll have a hard time progressing if you aren’t careful in doing this.

Puzzles mainly consist of inventory-based item manipulation. You’ll find plenty of things to pick up around New Delhi. Although there are very few characters in the game (and this is worth mentioning; last I heard, India had nearly one billion inhabitants—where the heck did they all go?), most of those that are there can be spoken to using a typical dialog selection tree. There is one great dialog-based puzzle in the game that I have yet to see elsewhere. It involves Fred being trapped in prison cell, with only a monkey as his aid. Never before has “Ohh Ahh Ahh Ahh!” held so much meaning. 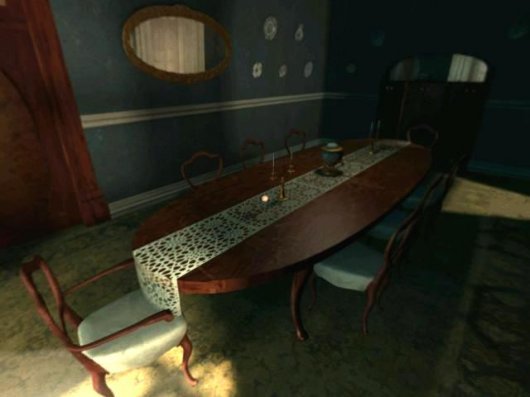 The graphics in Road to India are very strong, with detailed prerendered backgrounds and some wonderful cinematics. The characters are all rendered in 3D, and are sufficiently detailed, with some decent animated movements.

The music, while sometimes repetitious, consists of a high quality musical score of traditional Indian influence mixed with modern beats. It fit perfectly into the game world, and really added to atmosphere. The voiceover, as is common with many games, is a mixed bag, varying from good to bad. Overall, it’s more than acceptable, and I don’t recall any lines that made me cringe. 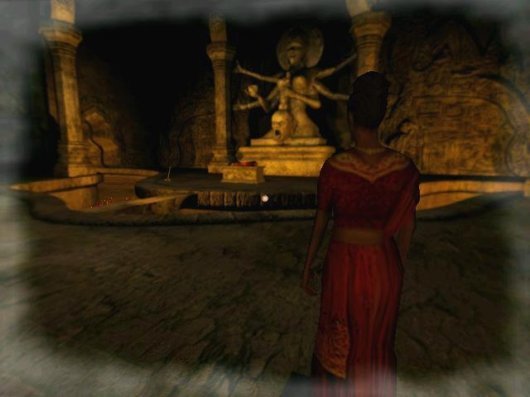 …but it ain’t perfect

There are a handful of problems with Road to India that, depending on your patience, may or may not annoy. The cursor moves at a less-than-speedy pace, with no option to adjust, and attempting to alter the mouse speed setting from within Windows did nothing to improve things. This is a no-no in my book, and there is no excuse for it. There were slow, and somewhat frequent load times between scenes, which I can only assume had to do with the 3D characters, and transitioning between “hubs” took a fraction of a second longer than it should have. I can imagine people with a slower computer than mine having further trouble.

And lastly, Road to India is a short game. A very short game. It wouldn’t be at all difficult to complete it within one sitting, and experienced adventure gamers may zip through within an hour or two. As a comparison, it gives Full Throttle a run for its money for World’s Shortest Adventure Game.

A strong, if short, game that’s worth checking out, unless you’re not fond of first person adventures.

GAME INFO Road to India is an adventure game by Microïds released in 2001 for PC. It has a Illustrated realism style and is played in a First-Person perspective.

What our readers think of Road to India