Zelenhgorm: Land of the Blue Moon

We get a small commission from any books sold.
All Bitmap Books
Written by
Christina Gmiterko — November 3, 2002

Welcome to the strange and bizarre world of Zelenhgorm, where the actors are Swedish, the dialogue is in English and the characters are... oriental? That's the initial feeling you get when you pop in the disc for Zelenhgorm: Land of the Blue Moon, but if you can get past the awkwardness of the setting and characters, you could find this game to be worth your time.

Moloto, the makers of this game, have some very grand and ambitious goals for the future of Zelenhgorm, including everything from short stories and novels to TV shows and movies, not to mention an entire series of computer games. They plan to unveil the games in three parts: The Great Ship, The Voice of Water and The Dark Below. These parts each consist of four episodes, for a grand total of twelve. Whether they will actually be able to produce and distribute them all beyond the first episode of The Great Ship is yet to be seen.

In this first game, you are thrown into the world of Zelenhgorm through the character of Arrikk Vaheirr, a young man from a tribe of fishermen known as the Deyrec. Your character is looked at by the other villagers with extreme superstition because they believe you to have supernatural or magical powers. Many years ago, a great war erupted to suppress those who possessed such powers. Throughout your journey, you learn the truth of what happened in the past that has brought about the culture's current state of fear and ignorance, and that it is your destiny to set what is wrong with this world right. 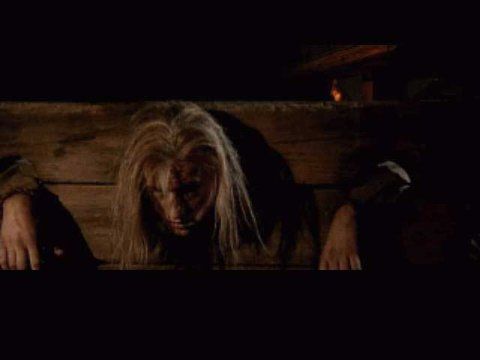 The story begins with Arrikk being awakened from sleep by a strange noise, and discovering that a massive ship has appeared and situated itself behind his house. In this chapter of the Zelenhgorm story, he must find out why it is there and what it has to do with him. In order to do this, you as Arrik must glean help and information from unwilling townspeople that are now even more wary of you because of the sudden appearance of the ship. This culture revolves around the water, and they believe the ship to be a bad omen of things to come.

The game is a mixture of both first and third-person viewpoints. While traveling from one location to another, using inventory items, or asking someone questions, you view the action in first-person. Other FMV cutscenes are shown in third-person. Zelenhgorm also features a navigational system similar to that used in the Dracula games, giving you the ability to rotate 360 degrees and look up and down. Unfortunately, the navigation is a bit confusing since there is no cursor. Only when you have an item positioned correctly on your screen will a cursor appear over it, letting you know that the item can be used or examined. While this approach does let you enjoy the scenery more without having anything distracting in the middle of the screen, it is jarring and takes a bit of getting used to. There are also a few areas where inventory items will need to be used on screen, and the cursor frustratingly does not appear at all. When you find something that can be used or added to your inventory, a circle shape will appear on it and you can activate it by clicking the left mouse button. The inventory is very simple to use and can be brought up by clicking the right mouse button. All of your items will be shown at the bottom of the screen and you can get a closer look at them by clicking on them, or you can click and drag them up to the main viewing window to use them with an object in the current screen you are viewing.

The background graphics are rendered in 3D with the 2D actors superimposed over them. They have accomplished this quite well, and the graphics are very pretty to look at. The town and the people within it have a very old look and feel. The clothing, homes, machines, tools, food and landscapes all have the distinct feel of ancient China. Even the actors seem to be made up in a way to make them look more oriental. 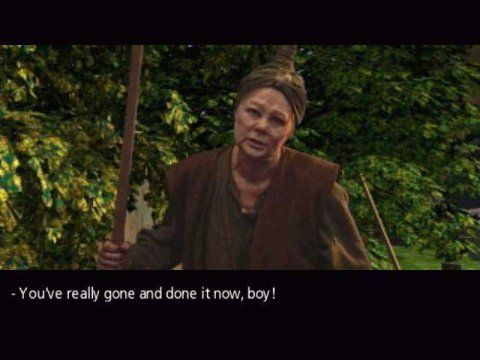 The acting is a mixed bag. Much of this has to do with the fact that everyone seems to be speaking with a different accent and are not really quite sure how they should be acting in such a strange script. There are a few characters that shine though such as Arrikk's grandmother and the town's slightly psychotic—uh, I mean psychic jester, who really managed to give me the creeps. The main character of Arrikk, unfortunately, is not given very much to work with in this first episode and comes off as very bland.

Music in the game is used sparingly, only chiming in occasionally to highlight a setting or occassion. For example, you'll hear vibrant music when first entering the town's market, or somber doomsday-type music when being sentanced if you have managed to upset a townsperson or disgruntle a guard. For the most part though, the game relies on sound effects such as the sound of the waves on the shore, birds chirping, machines making noise etc. 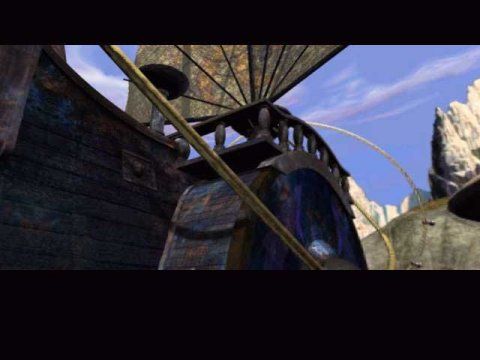 The game has several optional extra features that, while not necessary, are very nice to have. You can save at any point in the game, and the phrase 'save early and often' definitely applies in this game. You can, and probably will die at least once before finishing. There is also an option for English, German, Spanish or Swedish subtitles which will come in handy since occasionally what the actors are saying isn't completely clear.

It has been a very long while since an FMV game has been made available, and being a huge fan of those type of games I was very excited when I heard about this title. Unfortunately, I couldn't help but feel disappointed after finishing it. For me, the game was too simplified and short, and while it is part of a series, this individual game does not give you enough story or "bang for your buck," so to speak. I will say, however, that I am interested in seeing how this series progresses, and that if you are a fan of FMV or epic fantasy you will want to give it a chance.

An average title that may appeal to the FMV fan, or someone looking for something that is a bit beyond the norm for an adventure game.

GAME INFO Zelenhgorm: Land of the Blue Moon is an adventure game by Moloto released in 2002 for . It has a style and is played in a perspective.

What our readers think of Zelenhgorm