Review for Dark Fall: The Journal

This review originally appeared when the game was self-published by the developer. With Dark Fall now getting its overdue full retail release, we are returning it to the spotlight by running the article once again.

It's clear that we're in an era where publishers are refusing to give adventure games a chance. This does not mean that adventures are dead, however; it simply means that the future, at least short-term, is independently developed and published adventure games. It gives me hope when independent developers like Jonathan Boakes of XXv Productions are willing to labor for more than a year to create an adventure game. It gives me even more hope when the games they produce are as good as Dark Fall.

Dark Fall, created completely by one man over a timeframe of eighteen months, shows the dedication of a true adventure fan to his genre and the elements that make an adventure game such an enjoyable experience. Boakes refers to the game as his "labour of love" and it's apparent from the opening scene how much the designer must really love adventure games. 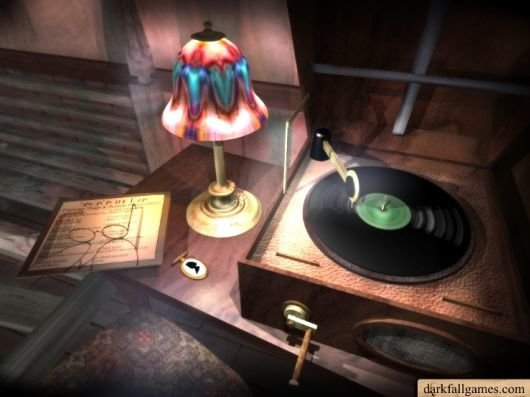 The story begins in London with a fantastic introductory sequence as you are listening to a phone message from your brother, an architect studying an old train station in rural Dorset. His message urges you to hop on a train and come meet him, making vague references to ghosts and how "something is wrong." You catch the late train from Paddington and head for Dowerton station.

Darkness follows, and you wake up in the train tunnel right outside of the station with the voice of a young boy guiding you out of the tunnel. From here the adventure begins.

Dark Fall is a first-person slide-show adventure, in much the same style as Myst, a game that inspired Boakes to begin designing games. You will explore the Dowerton train station and the station hotel, and uncover a lot of very interesting history. Scattered throughout the hotel rooms are various newspapers, notes, letters, journals, records, memos, and plenty of other reading material. You will slowly uncover the stories that took place in this station many years ago, and learn about the people who populated the hotel. All of this text is written with personality and is intriguing (and often humorous) to read. 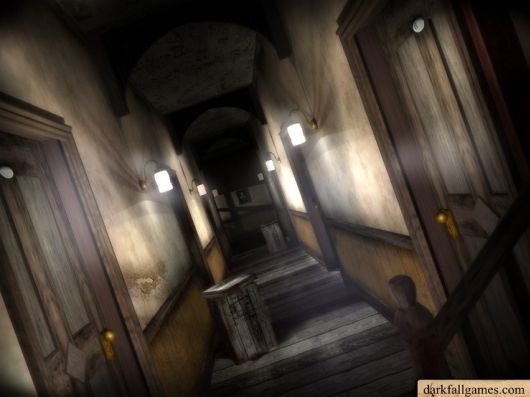 One of the rooms in the hotel is currently being occupied by two college students who are "ghost hunters" and have been studying the area for traces of ghosts. Your brother's message says that "what they were looking for has found them." A large part of your mission will be to take up their work and attempt to discover what it was, exactly, that has caused the disappearance of the ghost hunters and your brother.

You will not interact with any other human beings during your exploration of the station and hotel; however, you will have opportunities to converse with ghosts and ask them questions. You will also find yourself assailed with the haunting voices of former hotel guests as you explore their rooms. Clearly there is a very eerie history here, and it all will lead you to a confrontation with an evil darkness that you must trap for good.

The best part of Dark Fall is summarized in one word: atmosphere. This game demands that you turn off the lights and turn up the speakers. Boakes has succeeded masterfully at creating a world that is truly creepy. The stairs will creak, wind will whistle, and ghosts will howl unexpectedly. All of this lends credibility to the spookiness, and Boakes does a great job creating a dark environment without actually making things too dark to see, as other games have done. Every important object on the screen is very clear and visible. However, if you're running at a resolution of 1024x768 or above, you'll definitely want to decrease it because Dark Fall will run in a 640x480 window and then it will be difficult to see. 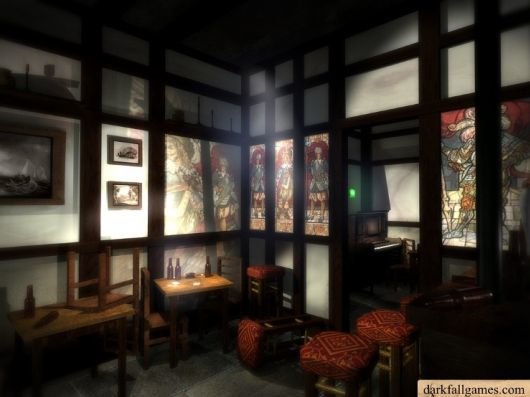 The interface is very simple. Arrows at the edge of the screen allow you to navigate through the environment. A magnifying glass gives you a closer look at that location. A hand icon allows you to operate, read, or pick up an item. A use icon indicates that one of the items in your inventory can be used there, and clicking on the correct item will automatically use it if you're on the correct screen. That's the extent of your clicking.

The puzzles are plentiful, with combinations, puzzle boxes, a well-designed musical puzzle, and thankfully an absence of timed puzzles or silly mazes. A lot of puzzles will involve information you gain from a distant part of the game environment applied elsewhere, so good note-taking skills will be important. This enriches the experience for me; those with shorter attention spans may not agree. The puzzles in the game are entwined with the story and much less frustrating than other first-person games like Starship Titanic which beat you over the head with puzzles. 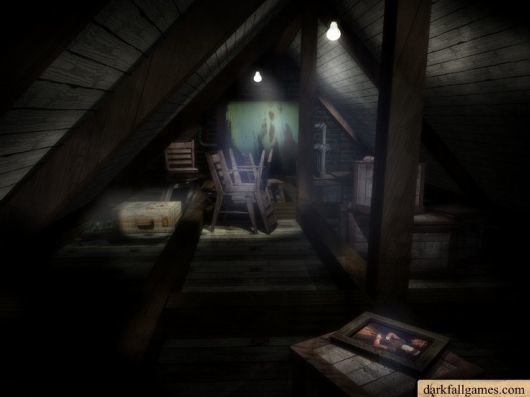 Navigation can be very frustrating; as an example, even though there are no obstacles preventing you from crossing the station tracks at any point, you can only cross on the far left side. After going down a staircase, if you wish to go back up, you must first take a step forward before you can turn around and then go back up the stairs. Sometimes clicking forward will move you so far forward that you can become disoriented and not realize what direction you're facing. This is not a problem exclusive to Dark Fall to be sure, but I did get a little annoyed with navigating around until I got used to the area.

It's clear that this is not a big-budget professional game that has been beta tested by large groups. There are small annoyances, such as not being able to skip the intro sequence if you select New Game. These are minor quibbles, though, and do not take away from the fact that Dark Fall is involving and intriguing. Exploring the environment Boakes has created is entertaining, and the story told is a very satisfying one. Without the pressure of a publisher's budget, he was able to labor over this project at his leisure until he was satisfied, and he got the important parts just right. If this sort of independent game is the future of adventure gaming, then I won't complain.

Dark Fall: The Journal is available at:

A very well-designed ghost story from a very promising developer, and well worth the purchase for suspense and first-person fans.

GAME INFO Dark Fall: The Journal is an adventure game by XXv Productions released in 20022003 for Mac and PC. It has a Illustrated realism style and is played in a First-Person perspective.