We get a small commission from any books sold.
All Bitmap Books
Written by
Joonas Linkola — September 29, 2002

Gilbert Goodmate and the Mushroom of Phungoria, released during a very dry season of releases in 2001, certainly generated lots of interest among the fans of traditional point-and-click adventures. Is this fungi-infected title something to drool over, then?

The story of Gilbert begins with a not-so-dramatic theft of a sacred mushroom that helped defeat an evil wizard who kept Gilbert's home village under his control centuries ago. The annually-selected guardian of the mushroom happens to be Gilbert's grandfather, and he's about to be executed for failing in his mission to protect the boletus in accordance of the laws. Our protagonist thus has a larger-than-life quest: locate the missing mushroom and bring it back to the village, to prevent the execution!

The very first thing in the game that catches the eye (literally) is the inconsistency in art quality. The lavishly colored and beautifully detailed backgrounds are a treat, but the animation is quite amateurish. Some animations seem to contain three or four frames which makes the on-screen action really twitchy and unsmooth at times. What's more, characters moving on the screen feel superimposed and don't blend into the sharp backgrounds that well. The overall art quality is good if somewhat dated, but the animation is sub-standard. The cutscenes in the game are far and apart and while the game plays in 2D, the opening scenes include some interesting use of 3D art. 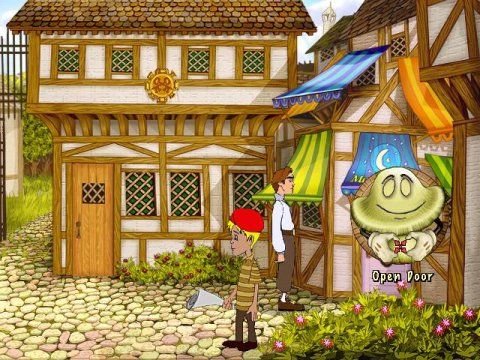 Gilbert Goodmate plays in 3rd-person and the interface is reminiscent of LucasArts' The Curse of Monkey Island and Full Throttle: the left mouse button, when clicked on an item, gives you the eye, hand and mouth actions which will translate correctly depending on the situation, ie. eyes usually represent "look", while mouth can stand for "talk", "taste" or "blow." The right mouse button opens up the inventory which can be used to examine items in your possession more closely or combine them to create new items. The system is pretty flexible and the learning curve is quite short, especially to someone who played one of the aforementioned titles. The on-screen cursor will change into a mushroom when you move it over a possible exit from the screen. There were a couple of screens that were painted in a way that left some guessing on where the exit was, but it wasn't a big problem.

The puzzles don't include any super-original ideas and rely on the tried-and-true format of object-oriented problems. I personally found some of the puzzle structures to be a bit annoying and superimposed from the game--"get object A by getting object B by getting object C" can only go so far. Sometimes I even forgot what I was actually after when I dwelled in some sub-sub-subquest. Even so, the puzzles are logical and mostly well constructed. Action-challenged gamers such as yours truly will be happy to know that there are no action puzzles or time-related problems in Gilbert Goodmate.

The overall sense of comedy in the game works quite well. The designers have obviously been influenced by the Monkey Island series as there are numerous references to it--hence the similarity in interface, too. Although some of the humor feels a bit forced, the dialogue is mostly witty and full of amusing remarks. I found myself laughing out loud a couple of times at Gilbert's comments which weren't always completely politically correct. Some of the discussions felt a bit overstreched, though, as the characters kept babbling about. Also, some conversations were scripted in a way that required you to go through all dialogue choices before you could stop talking to the character. Luckily, you can skip dialogue lines at will if you're tired of listening to them. 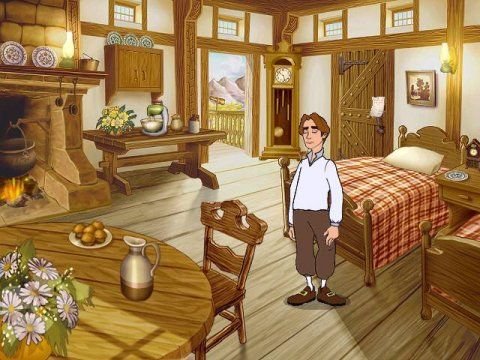 The characters in the game are a mixed bag--some of them, such as the over-ardent bridge guard, were tiresome and cliched, while others I found very entertaining--one of my favorites is the tea-freak Sir Lipton who kept going on and on about his great adventures for Her Majesty and the many uses of tea. The voice-acting is good overall--again, some voices were annoying while others felt natural and fitting. Sir Lipton's British-English accent is a dead-on choice. Subtitles are available and they can be switched on and off in the ingame options menu. The atmospheric, orchestral background music works well and fits the setting.

The game is delivered in a 2-CD DVD snapcase and includes a slim 24-page color manual that includes the installation and gameplay instructions plus some facts about the making of the game. The installation lets you select between three installation sizes, varying between 25 and 400 megabytes. The in-game options include separate volume sliders for speech, sound effects and music as well as switches for optional visual features. The designers apologize for the lack of the gore slider in the manual ("This will be compromised in our next game").

Gilbert Goodmate is a game of uneven qualities. It's not fair to compare a game that started out as a fan project to fully commercial titles from industry veterans, but while the hardcore fans of 2D point'n'click adventures will surely enjoy this title and its 40+ hours of solid gameplay, I'm a bit hesitant to really recommend it to someone who's been spoiled by The Longest Journey and Grim Fandango. In other words, its traditionality can work either way for it. In any case, it's a fine achievement from Prelusion and an enjoyable little adventure.

An enjoyable enough adventure. Traditionalists will appreciate the LucasArts style, but it is far from flawless.

GAME INFO Gilbert Goodmate and the Mushroom of Phungoria is an adventure game by Prelusion Games released in 2001 for PC. It has a Comic cartoon style and is played in a Third-Person perspective.

What our readers think of Gilbert Goodmate