We get a small commission from any books sold.
All Bitmap Books
Written by
Heidi Fournier — August 5, 2002

Enter the world of The Watchmaker, a new third-person / first-person multi-character adventure game. Never heard of such a thing before? You have now, and it’s an interesting jaunt. In The Watchmaker players have the choice of playing as Victoria Conroy, Legal Eagle or Darrel Boone, Ghost Buster. This is a move sure to please those concerned that only having a male or female character in a game may reflect a subconscious sexism. But the multi-character idea is not really about sex, it about teamwork.

Having two different characters to play seems like a cool idea. Why not double your pleasure, like you double size your coke and your French fries? Overwhelmed by the joy of doubling my fun I happily jumped back and forth between characters. That’s until I snapped to the fact that it seemed I could only access inventory items by the character who picks them up and that some situations could only be resolved by the character opposite of who I was playing. This brings me to a cardinal rule and a friendly tip – always read the manual. Cradled by adventure games and their relatively static interfaces, I usually skim my manual, superciliously throw it aside and plunge into the icy waters. However, most players will figure out rather quickly that this is not the best approach for The Watchmaker. Especially as they become confused about how to operate their inventory items and work various triggers in the gaming environment. The game is generally good at letting you know that only Darrel or Victoria can perform a task and once you read your manual you will know how to keep the two of them in close quarters for the occasions when a swap is called for. Once you understand that it takes both characters to complete the game, something I will admit I stubbornly tried to circumvent, it is simply a matter of learning how to operate the game’s controls.

Keyboard aficionados will delight in The Watchmaker’s interface, which is a hybrid keyboard/mouse set-up, reminiscent of Grim Fandango. While the interface is surely more complex than what most adventure gamers are used to, you will find that you are running with it in no time. Most of the challenges presented in the game are inventory based. While very challenging, none of them were overwhelming. I felt the designers did an excellent job of weaving all the puzzles into the story and the game environment. Every test make perfect sense in relation to the story and the environment in which it was placed. There were no truly grueling trials, due to the fact that proper clues and information was expertly knit into dialogue or easily found through exploration and summation. 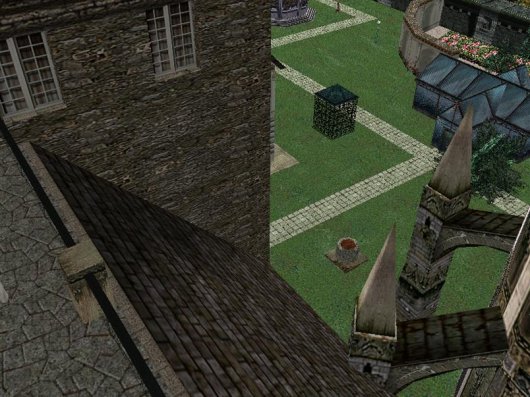 The story powering the game is introduced as a search and destroy mission for a doodad so powerful, you guessed it, it could cause destruction on a global scale. It then appears that this doomsday device is hidden in a Viennese castle owned by a vague, but sinister presence aptly named, the Multinational. Considering the current crop of news articles centering on corporate avarice, an ominous international conglomerate as foe doesn’t seem so far fetched. This isn’t a new or even original plot, but the story fills out and deepens nicely as you explore the castle.

The graphics in The Watchmaker are agreeable enough, but are certainly not as spectacular as those in some other current releases like Myst III: Exile. In fact, they are more similar in style to the graphics in Sanitarium. They are boxy 3D, but then what 3D isn’t boxy? Up close the graphics lose a lot of consistency however and tend to blur. This is very noticeable in clothing, wall textures, and other surfaces. Lighting is employed well to contrast and highlight, but this isn’t a cure, rather it acts to highlight or dull these distortions.

And dull is how you would describe the voice acting in The Watchmaker. Voice work in games is almost always done badly, but why I ask you? Are the companies trying to tell us that this is the best that they can do? Are they hoping to keep our expectations low so that there isn’t a huge need to fill? Why, is an even better question when you have truly experienced inspired voice work in other games. Damn you Grim Fandango, for spoiling me forever. 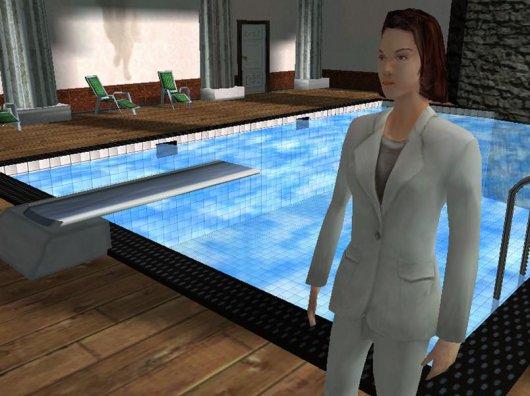 Maybe it is unfair to compare the absolute brilliance of the voice work done in Grim Fandango to a game like The Watchmaker, but in all honestly this is a product that is to be sold. When a game six year older title provides better stuff you start to wonder how they plan to compete. Maybe you say that I am placing the bar too high, but I tend to disagree, I have honestly heard better voice work on my local radio station than what I heard in this game. If Bargain Bill’s Auto Dealership can afford decent voice work, why can’t adventure games?

Lines are often delivered in a flat and detached way, citing the obvious and coming out in jags (the game allows you to save the dialogue to your hard drive for smoother delivery, I did this but it didn’t improve it much). Nowhere is this more painfully obvious than with the character of Jude Roberts. A gold-digging vamp in the game, the actor providing her voiceovers offers her lines in breathy insipid manner that caused me to flinch every time she spoke. It also became apparent that the dialogue trees were not designed in a way to keep them consistent with progress made in the game. For instance, one character told me I could not enter a restricted part of the castle when I had already blackmailed the key out of him. 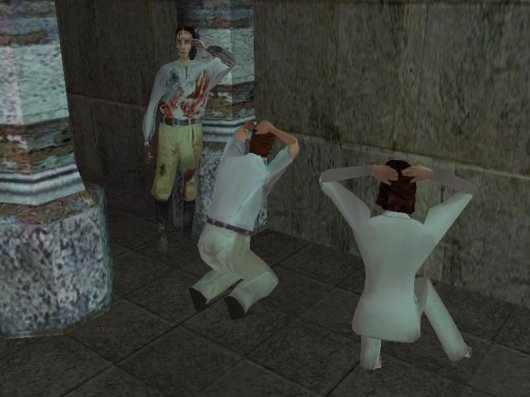 The soundtrack falls victim to brain drain as well. Mainly it consists of two pieces of music. While neither is dreadful, neither does much to build atmosphere or depth into the game. Luckily it doesn’t play constantly and you are given the option of turning down the music or all the way off. However, the soundtrack does redeem itself in its employment of ambient sounds. I loved the fact that when my character was running in the grounds the sound consistently changed from feet on sod to stones when a walkway was crossed.

Despite a few glaring deficiencies, The Watchmaker is a solid game. It offers firm value at its retail price and for the length of gameplay, approximately 20-30 hours, as well as for the degree of difficulty in its puzzles. As for the replay value, game situations don’t differ remarkably by character, but the chance to play through various sections as a different character is appealing. However, the story is good and I think most players will appreciate its subtly unfolding layers.

GAME INFO The Watchmaker is an adventure game by Trecision released in 2001 for PC. It has a Illustrated realism style and is played in a Third-Person perspective.

What our readers think of The Watchmaker