The adventure genre caters to many different preferences. With various settings, themes, atmospheres, and lengths, there’s something for just about every taste. Some games are involved dramatic epics, others dark and gory fright fests. Hostil, from indie developer Eteru Studio, attempts to somewhat bridge the gap between lighter and more hardcore fare. This science fiction point-and-click game about an astronaut crash-landed on an uninhabitable planet is short enough to appeal to a more casual audience, while also trying its hand at a mysterious story that must be uncovered little by little. Unfortunately, these two characteristics are at odds with each other, meaning there’s really too little to do before the credits roll to give the narrative enough breathing room.

In practice, Hostil shares quite a bit of similarity with a “Choose Your Own Adventure” book. The game begins as the astronaut, ejected from his crashed vessel, regains consciousness and finds himself on a barren, inhospitable world. While it has the mechanics of a traditional third-person point-and-click adventure, complete with a pop-up inventory bar, the experience is focused more on surviving the planet’s multitude of deadly traps and environments than storytelling or out-and-out puzzle solving.

“Surviving,” in this case, really just means “avoiding.” Radiation, lakes of acid, and lethal drops are all instant-death traps that usually can’t be dealt with so they must be circumvented instead. The only way to know where not to click is by simply checking out everything; Hostil is all about trial-and-error. Where classic adventures often made sudden deaths amusing, however, here there are no animations for the various traps that inevitably get triggered, only a succinct and to-the-point text box. Dying is neither humorous nor presented in particularly interesting fashion, visually or otherwise. When the protagonist is killed, the game resets the current screen but adds a skull icon over any lethal spots already discovered. Sadly, this reduces each screen to little more than a pixel hunt for cursor changes just to move on. Lasting to the end means exhausting all possible ways to die – or at least, that was the original plan. An optional new game mode added since launch removes all player deaths and just focuses on experiencing the story. 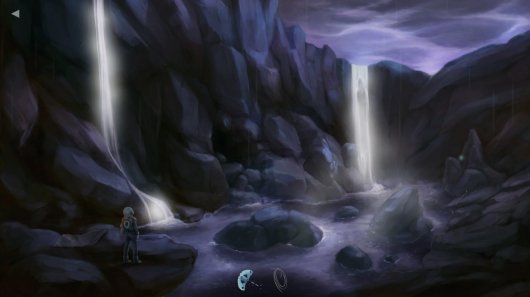 The same kind of restriction is true for standard game progression. You will not be allowed to move on to the next of Hostil’s dozen or so screens unless all possible hotspots, vital to progression and otherwise, have been investigated. And yet you can’t simply pick up a necessary item just by clicking on it; there must be a valid reason for it before it’s added to the inventory, so puzzles must be discovered before their corresponding objects can be acquired. For example, in the game’s first scene, a pile of debris is located in front of the crashed spaceship. But until you have examined the cockpit’s cracked window, the astronaut will not search the debris for something that might help clear away the sharp glass shards barring access to the ship’s interior. This leads to instances of clicking on items over and over, especially when the game refuses to progress, hoping to elicit a new reaction.

Having been developed by a small indie team, Hostil’s graphical presentation is proportionately humble. Yet the team wasn’t content to settle for the path of least resistance: the environments, though limited in quantity, are clean, hand-drawn scenes saturated in color and covering a variety of planetary locations, from craters and perilous cliffs to native settlements and ruins left behind by earlier explorers. Though there are some moving parts and effects in each scene, character animation plays out almost like a slideshow, with the astronaut making his way from one spot to another via a series of transition images. Exploring areas in more detail is handled through close-up inserts appearing on-screen in first-person perspective. 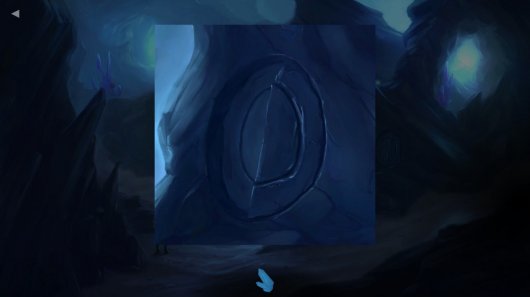 Hostil’s synth music is understated, often falling silent and giving way to ambient sounds like rain or lightning storms, but when present it does certainly add to the planet’s underlying hostile atmosphere. Towards the end of the game, a couple of puzzles take a unique approach to music-based (or at least tone-based) obstacles, asking players to replicate a series of specific pitches using the environment. Character speech is text-based, lacking any voice acting, though with the inherently solitary setting and short playtime of around an hour, there isn’t much dialog to deal with anyway.

When all is said and done, Hostil really doesn’t go beyond a one-afternoon distraction, though it's one that at least takes itself seriously. Although nothing really stands out graphically, the savage alien topography is expressive and colorful. There’s even a bit of puzzle variety for such a short experience, and the skeleton of a story here. It isn’t given enough time to establish much of an emotional punch, and probably raises more questions than it has left itself room to answer, but there are enough pieces in place that imaginative players will be able to fill in some blanks on their own. So it’s a shame that the restrictions on player progress seem needlessly arbitrary at times, existing more to stretch out an abbreviated experience to a more respectable length. The end result is a competent, perfectly well-intentioned if ultimately underwhelming diversion that could have been so much more.

Hostil feels like the bare-bones outline of a survival tale in an alien landscape. There’s enough effort and polish to demonstrate a legitimate attempt at a serious narrative, but it’s disappointingly hamstrung by its own brevity to really be effective.

GAME INFO Hostil is an adventure game by Eteru Studio released in 2017 for Mac and PC. It has a Illustrated realism style, presented in 2D or 2.5D and is played in a Third-Person perspective.

What our readers think of Hostil