Spike Chunsoft’s Danganronpa series has experienced quite a rise in popularity, even in the West. Word-of-mouth among adventure and visual novel enthusiasts, particularly the crowd waiting for their next Phoenix Wright fix, has brought the Japanese killing game series to the forefront of mainstream industry attention. Each successive installment in the franchise has done a good job pulling players into its bizarre high school murder premise, featuring eclectic, memorable casts of characters that stick with you long after the credits have rolled. Danganronpa V3: Killing Harmony stands out as my favorite entry in the series to date, offering some of the best writing and characterizations seen so far while managing to stave off staleness that could have so easily set in by now.

Let’s get this out of the way right up front: Killing Harmony is not designed for newcomers. While the setting, cast, and majority of events work to some degree as a standalone experience, the game fully expects players to be familiar with both previous titles to get the most out of its story. Once again, it follows the same basic plot outline and narrative structure as its predecessors: Sixteen high school students with unique “ultimate” talents find themselves imprisoned without their memories, and are told that in order to leave they have to win a killing game. What follows is a highly entertaining series of promises, plots, betrayals, and grisly murders and trials in which survival doesn’t come cheap.

V3 does nothing to change up this tried-and-true formula, but puts its own unique spin on the finer points. The killing game this time takes place in the Ultimate Academy for Gifted Juveniles and the grounds around it, all surrounded by an impenetrable glass dome. Monokuma, the evil robot teddy bear/school headmaster is back, and he’s brought his offspring, the Monokubs, with him. These five equally twisted mechanical bears pilot the hulking Exisals (bipedal battle tanks), forcing the students to march to the beat of Monokuma’s drum through six intricate and tense chapters. With sixteen protagonists and six villains, the stage is overflowing with strong personalities competing for their turn in conversations. But as warped as the villains – and even some of the students – are, there is plenty of wicked fun and dark humor to go around as well. 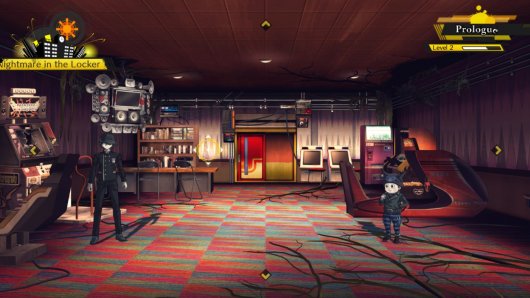 Anybody who knows the first thing about Danganronpa knows that even a superficial conversation about plot will result in spoilers. It’s not the kind of narrative that slowly builds up to a climax; keeping players on the thin razor’s edge between unexpected twists and surprising reveals is the game’s bread and butter. So I won’t reveal much in the way of specific details, but I can say it’s invigorating to see that, even in this third outing, the writers have managed to come up with fresh scenarios that keep one-upping each other in wow factor. The story offers many water cooler moments, and just begs to be discussed and debated after completing it.

The quality of the writing, the creativity put into the murder cases, and the spectacular cast of characters make V3 easily my favorite of the series so far. Some elements have been designed specifically to complement one another. Miu Iruma, the Ultimate Inventor, is not only vital to the plot with her ability to create useful gadgets, but makes for a good comedic pairing with K1-B0 (pronounced Keebo), the Ultimate Robot, whose mechanical subtleties fascinate her to no end. Gonta Gokuhara, a hulking simpleton raised by wolves, is a gentle giant, but is easily taken advantage of by a criminal mastermind like Kokichi Oma, the Ultimate Supreme Leader. Bonds between characters evolve in believable ways based on their personalities; some are loners, others are leaders, and there’s an almost palpable feeling of connections disintegrating when someone who was the glue holding them together is lost.

Unfortunately, even with all that, the game’s ending is my least favorite to date. Considering how much disbelief players are asked to suspend over the course of a Danganronpa game, it takes a finale of epic proportions to qualify as “hard to swallow.” Sadly, this is precisely how V3’s ending came across to me, and it tinged the overall experience, if only ever-so-slightly. 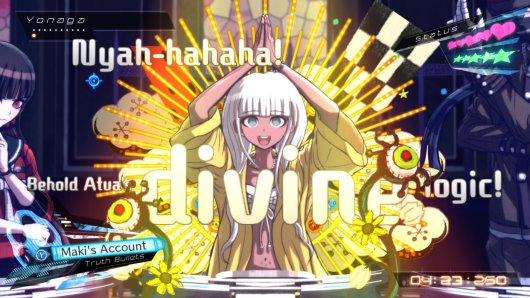 Each of the game’s chapters, as before, is split into Daily Life and Deadly Life segments. During the former, the story moves forward peacefully, with characters interacting with each other and players exploring the school grounds. A few new areas and rooms are made accessible at the beginning of each new chapter. Once the inevitable happens and a body is discovered, the Deadly Life investigation section begins, in which players must scour rooms for clues used during the upcoming trial.

The eclectic mix of gameplay elements, both new and old, that pop up during class trials will feel instantly familiar to series veterans. The sword-swiping Rebuttal Showdowns and series staple Non-Stop Debates are back. Being able to lie about facts is a new mechanic this time around. While this sounds intriguing, it only works at pre-scripted times, and feels like it undermines the game’s “seek the truth” motto. It isn’t the game-changer it was meant to be, then, but it does open up some interesting possibilities for future installments. Other twists on the standard debate include Mass Panic Debates, which feature multiple characters talking over one another, and Debate Scrums, which see the entire cast split into two factions after coming to a stalemate. 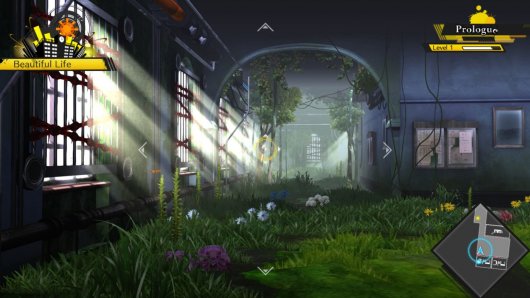 Finally, some new minigames have replaced a few of the old ones. Players must spell out a phrase letter by letter in Hangman’s Gambit, participate in an arcade-style driving segment while answering questions in Psyche Taxi, and reveal hidden pictures in Mind Mine. It’s worth noting that the challenge of these minigames does seem a bit toned down this time around; even playing on the hardest difficulty setting never saw me run out of time, and penalties for poor aim during Truth Bullet sections, for example, have been reduced or eliminated entirely. Still, they are all a means to an end, some more gimmicky than others, and with the exception of the debates don’t add much to the experience. These minigames pop up with about the same consistency as ever, though the longer cases will understandably feature more of them than others.

This being the first entry developed directly for PC and home console rather than mobile platforms, one might reasonably expect quite a few graphical updates. While I can understand the aversion to changing the core look of the game – its cardboard cutout character models and psycho pop first-person environmental exploration – the additional horsepower available just isn’t impressively utilized, at least very often. There are a decent number of animated cinematics, and one case in particular adopts an all-new graphical style that fits perfectly with its setting, but there isn’t much on display here that’s clearly an advancement over previous outings. That said, this isn’t really much of a gripe, as V3 simply feels like a continuation of the series, and certainly doesn’t look bad.

One area I did find considerably improved is the musical score. There are many tracks that absolutely stuck in my ear. “Becoming Friends” is extremely hummable even when away from the game, and will forever be my go-to theme for anything even remotely anime. Then there’s the inclusion of Debussy’s “Clair de lune,” which proves to be a great motif for a specific character, and goes a long way in providing some emotional depth with its somber and sanguine tone. V3 also continues the series’ history of well-done vocal performances from its cast. Only select segments are voiced, though trials have spoken dialog from beginning to end. The level of obscene language seems a bit harsher this time, but some fans will love it all the more for that. 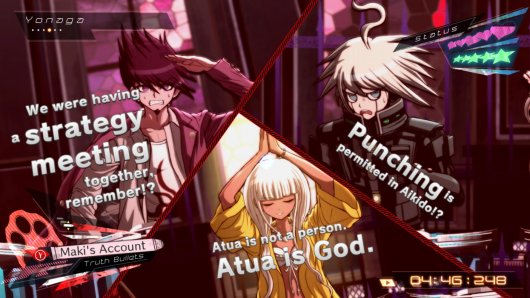 Which brings me to my last point, which can be either a pro or con, depending on the situation. V3 is easily the longest Danganronpa yet, eclipsing the other entries by several hours at least. The game easily clears the 30-hour threshold and, depending on how much time is spent on exploration and Free Time segments, is well on its way to the 40-hour mark. With a story this engaging, that’s generally a good thing, but it requires a good deal of stamina to roll with the pacing dictated by the game, particularly when the characters are endlessly chewing over a detail of a case I’d already guessed or figured out some time ago. There is admittedly a feeling of padding during certain sections, particularly the last case, which is brimming with repetitive conversation. It’s ultimately worth the time investment, but slowing the momentum down in the final act throws the enjoyment off a little.

Fortunately, things are far from over after the credits roll. There’s a slew of unlockable side content to explore, the majority of which becomes accessible by completing the main campaign. Apart from the music, art, and movie galleries, there’s a mode that lets you just focus on building up the relationships between students and exploring their backstories without the threat of them being killed off. There is also the board game-like Talent Plan mode, which features all characters (including the complete casts from the first two games, once they’re unlocked) leveling up stats, earning skills, and interacting with each other in short story segments. Those characters can then be taken into yet another mode, Monokuma’s Test, which is a full-fledged, if simple, dungeon crawler RPG, complete with party building, looting, constructing gear, and turn-based combat in the fifty-floor basement dungeon of Hope’s Peak Academy.

On the checklist of minor issues and missteps, Killing Harmony does get its fair share of marks. What it offers in terms of new gameplay is admittedly negligible; new minigames aren’t necessarily bad, but don’t offer any more fun than what was there before. It can also feel a bit bloated at times, especially near the end, slowing the pacing down unnecessarily. But what have always been paramount in these games are the story and characters, and on these fronts the third game receives high scores across the board. It’s a substantial, intricate, surprising, emotionally-charged, clever mystery that one-ups what came before in most regards. While the final resolution may not be for everyone, the fact remains that Danganronpa V3 is a damn fine game, and shouldn’t be missed by anyone who has followed the series this far.

Newcomers need not apply, but fans of the Danganronpa series are in for a treat, as the story and characters are among the best we’ve seen, while the gameplay introduces just enough tweaks to keep things interesting.

GAME INFO Danganronpa V3: Killing Harmony is an adventure game by Spike Chunsoft released in 2017 for Android, iPad, iPhone, PC, PlayStation 4, PlayStation 5 and Switch. It has a Stylized art style, presented in Realtime 3D and is played in a First-Person perspective.