Tale of the Fragmented Star

The experimental indie scene is the place to go to find unique game ideas unaltered, presented the way their creators conceived them. 12 East Games’ Trackless certainly does this, offering an enigmatically ambiguous dystopian future to run around and solve puzzles in, marrying a first-person graphic adventure with an ultra-traditional text-based interface. But it may have somewhat overstepped its goal of keeping things simple by making the world too one-dimensional and leaving out any real purpose for players to embark on their quest, other than the generic “look upon The Object.”

Finding one’s bearings in the world of Trackless is the first challenge players will face. The game opens with you in a train cabin, mid-journey. Little is explained, despite the fact that a rudimentary game manual and an introductory video are both found in your cabin. The trouble is that the manual is rather brief, and viewing the video requires mastering the game’s controls first. This includes understanding how its text input system works, which is contextual and only accessible when you are close enough to an object that can actually be manipulated. A large on-screen cell phone also covers nearly half of the screen at first, displaying a list of objects and constantly-changing numbers. After bumbling my way through figuring out the proper use for all of these features, I decided to restart the game, now actually able to play the first few scenes the way they were meant to be played in the first place.

As informed via the informational video in the train cabin, you have taken on the role of a Seeker, a person on a pilgrimage across a ruined land to see a mysterious artifact called “The Object”. Why the Object is important isn’t revealed, nor is the reason many people want to see it, what’s happened to the world, or why Seekers must first pass several Trials to prove themselves worthy. While giving away all that information right at the beginning isn’t something I expected the game to do, I hoped to be more enlightened by the time my journey had reached its end. Sadly, Trackless never gives away any further details, which cheapens its ambiguous setting and setup from “mysterious” to “disposable”. 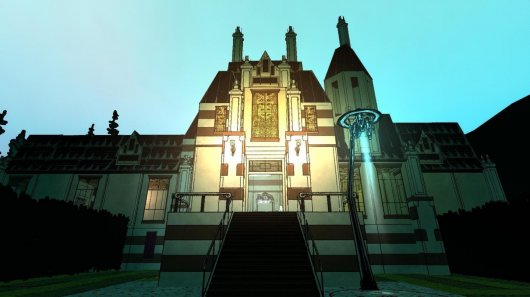 Still, I thought that maybe the goal of the game is to simply provide a relaxing experience. This I have an easier time imagining; the soundtrack is generally ephemeral and new-age, unobtrusive and in the background, or even entirely absent in some sections. The gameplay is leisurely and measured, consisting of traversing the open 3D environments along the way, occasionally hitching a smooth and gentle ride on a sailboat, a plane, or a ferry. After trying several control schemes, I discovered a mouse-and-keyboard combination worked best to control both movement and camera separately. There are a handful of other characters to engage in simple single-click conversations, but there’s no conflict, no elements or creatures to fight against, just a path forward that must be discovered. A calming art style, if a bit drab and monotone in color, is also displayed. Environments look a bit like a cross between hand-drawn art and chalk or coal rubbings – a bit basic and rough around the edges, with lots of shades between dark green and black and variations thereof.

All the puzzles in Trackless revolve around manipulating items in the environment, ranging from a simple mouse-click to the more interesting text input interface. The on-screen phone helps you keep track of which objects you can interact with, and which ones still have some remaining use by color-coding completed items with green text. Entering a new area automatically updates the phone screen with the relevant hotspots in that area, though those who like to go it alone can minimize this display to the bottom of the screen, where it is still visible, but less so.

Certain objects, indicated by a unique interaction icon, can be right-clicked to display the text interface. Typing in a fitting verb will then carry out the desired action. More interestingly, the game awards points based on how specific the verb is, with more common words receiving a much lower point score. For example, using a radio to call for assistance requires text input. Multiple verbs will suffice, but a player who types in “talk” receives fewer points than one who uses “speak,” while using “broadcast” nets the highest point value possible. 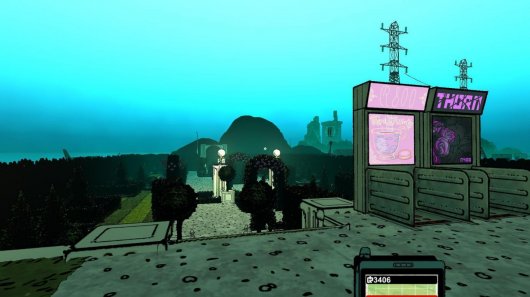 This system does provide a fun activity, though not a particularly difficult one, as the intended uses for items are often quite clear, and getting completely stuck is very unlikely. Other tasks are simpler still, merely requiring objects to be clicked on, like sending electricity to a power station to operate a nearby button. But even here, the journey is more enjoyable than its separate parts, and it is interesting to see where the path will lead to next. A sewer system, a ceremonial burial chamber, and a popular disco are just some of the disparate locations that are seamlessly stitched together in Trackless. Sadly, the game is very short, clocking in around two hours, so the tranquility is short-lived. To top it off, the ending is – perhaps purposely – sudden and underwhelming, and it left a bit of a bad taste in my mouth.

I’m a little unsure what the desired outcome or target audience for this game is. With its abbreviated length, replaying it for a better score is certainly feasible, as is comparing scores with friends to see whose vocabulary was the most robust. But as far as in-game incentives go, earned points are only useful for purchasing new themes for the phone display, and to buy various costume pieces at an end-game souvenir shop (which is likely a commentary on commercialism, placed, as it is, right next to the holy Object itself). But neither of these is a practical reward, and in the case of the costume, not even visible to the player.

Ultimately, this game can be commended for its unique style and blending of ideas, but it is a bit too underwhelming for its own good, even if some of its minimalism may have been deliberate. The world feels alien, empty, and underdeveloped, and the limited interactions with the sparse NPCs are shallow. Puzzles are enjoyable, at least, as is the serene atmosphere throughout it all, but the challenge is fairly low. Even the text input interactions can only elevate the experience so much, as there just isn’t enough of it squeezed into the couple of hours before the credits roll. Perhaps if there was more content on offer, a deeper story or puzzle experience, I would have walked away with a more forgiving feeling at the end of it all. As it stands, I have a lukewarm affection for the novelties of Trackless, but there just isn’t enough to work with to kindle more fondness than that.

Trackless feels like it’s trying to offer some kind of social commentary, but any deeper meaning remains unclear, and nothing of any substance is ever revealed. In the end, that leaves us with a cool blend of puzzle styles that is perhaps worth a single cursory playthrough for those looking for something a little different.

GAME INFO Trackless is an adventure game by 12 East Games released in 2017 for Mac, PC and Linux. It has a Stylized art style, presented in Realtime 3D and is played in a First-Person perspective.

What our readers think of Trackless