Psychonauts in the Rhombus of Ruin review

It’s been well over a decade since Psychonauts first released, and in that time the game has built up a cult following eager for the sequel that's now currently in production. But before the series takes the next full step, PlayStation VR owners are invited to embark on a short stint into virtual reality, in a side mission intended to connect the dots between the two main games. Though not without its flaws, Psychonauts in the Rhombus of Ruin is a short, simple, but fairly fun refresher course for veteran players on the game’s cast and their psychic abilities, and serves as an introduction for those new to the fold. Think of it as an appetizer, if you will, only involving puzzling instead of platforming.

This VR mini-sequel picks up exactly where the first one left off all those years ago. Newly inducted into the Psychonauts (a trained group of spies with paranormal abilities) after his adventure at the Whispering Rock Psychic Summer Camp, Razputin Aquato (aka Raz) flies off on his first mission: to save the organization’s Grand Head – and father of his girlfriend, Lili – Truman Zanotto. Accompanying him are, of course, Lili, Sasha Nein, Milla Vodello, and Coach Oleander. In a tutorial set aboard their ultra-advanced-yet-spy-retro jet plane, players get to try out each of the team’s psychic gifts. The group soon discovers that Zanotto is being held prisoner in a secret undersea lab, surrounded on all sides by Psilirium, an element that blocks ESP abilities. To make matters worse, it’s located in the dreaded Rhombus of Ruin – a play on the Bermuda Triangle – where countless planes and seafaring vessels have disappeared over the years.

As they approach the Rhombus of Ruin, the Psychonauts’ jet crashes, and all five of them are separated and taken to different sections of the submerged facilities. Players stay in control of Raz, who wakes strapped to a chair, with most of his Psi powers blocked by the Psilirium. He is, however, able to shift his consciousness into other living creatures. This is how you navigate the game in virtual reality, essentially hopping from one person or creature to another in one long daisy chain of consciousness. Existing as a pure consciousness means Raz has no way to carry inventory, and any creatures he possesses remain rooted in place. Fortunately, you can still turn and swivel your viewpoint in the VR space a full 360 degrees, as well as lean in any direction. 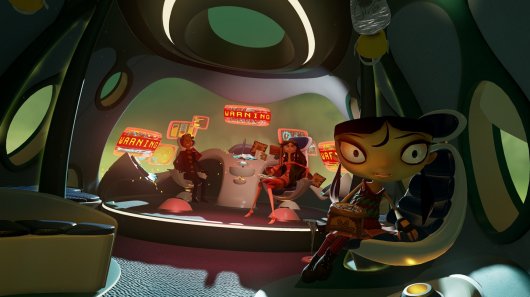 The object of the game is to jump from body to body, sometimes within an enclosed area and other times across the Rhombus in an underwater sequence of fish, eels, and other denizens of the deep. Occasionally, a puzzle blocking the way forward must be solved to find each member of the team and help them recover from their Psilirium poisoning, allowing them to add their powers to Raz’s arsenal in the process. This cycle becomes apparent pretty early on in Rhombus of Ruin’s approximate 2-3 hour runtime. While it isn’t particularly meaty in gameplay or challenge, the game integrates its puzzles right into its world design in a natural way. All environmental manipulation requires unlocking Raz’s psychic abilities, letting you Psi-Blast objects or set them on fire with pyrokinesis via a simple button press, as well as levitate and move them around using head motions. It’s a pretty neat experience to send a roll of toilet paper flying towards Coach Oleander with a well-timed flick of the head while he’s perched on the john.

The VR works well enough, though there are a few flies in the ointment that mar the experience somewhat. Manipulating an object in the environment first requires highlighting it by centering the VR helmet’s vision on it. This is not a big issue, though it can occasionally take a few attempts to land on the right object if there are many bunched together in a tight space, or require a bit of turning and craning of the neck. A bigger issue for me was the unwelcome shakes and flutters of the virtual reality environment when colliding with a wall or ceiling while turning this way and that. The game doesn’t take into account the sometimes-cramped areas players finds themselves stuffed into, and these jarring movements in a VR space can lead to some mild dizziness, perhaps even moments of motion sickness for some. This is unfortunate, since it seems the designers actively tried to avoid this problem by keeping all of Raz’s hosts standing still.

Another odd phenomenon I encountered that was directly tied to the VR is a constant, gradual shifting of the image to the left. As Raz hops from person to person, the angle considered to be facing “forward” keeps moving a few degrees more to the left. Over time, this means players are forced to keep turning first their heads, then their whole bodies, further and further left to stay centered in the game. Even those on spinning office chairs, like I was, will eventually get tangled up in the PSVR’s own cords and cables. After an hour-long gaming session, I had spun my chair around about 450 degrees. Sadly, there does not seem to be a way to reorient the internal game camera to fix this. 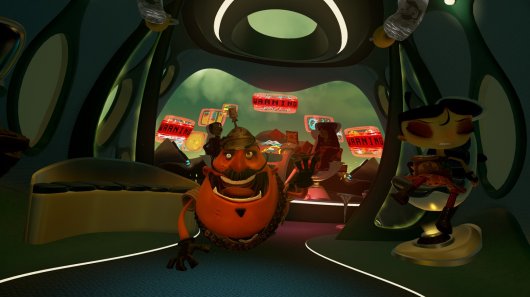 Minor technical annoyances aside, Rhombus of Ruin is a silly, enjoyable puzzling session. Every challenge depends on making use of Raz’s Psi powers to solve, whether it’s figuring out the correct sequence of buttons to push to open an underwater window shutter, or repairing a small music box so that it plays a key melody once again. Many tasks require inventiveness and a willingness to delve in and try things out, though a purely traditional sliding block puzzle makes an appearance as well. Of course, everything is steeped in trademark Double Fine/Tim Schafer humor, like a late scene featuring a machine capable of separating and recombining genetic material of anything put into it, encouraging those with twisted imaginations to come up with some darkly amusing and completely optional concoctions. Most obstacles won’t overly stretch the mind, though, particularly since they take place in closed spaces, with only a handful of available ways to interact with items.

The presentation features the same highly stylized, exaggerated and slightly disturbing art style seen in the first game. Everything goes in the Psychonauts universe, from a school bus stalled on a railroad track (underwater, of course) with a deadly train only meters away, to being strapped to the mast of a ship which is itself floating in a giant bathtub. The graphics seems a bit smoother and prettier this time around, likely attributable to being on next-gen hardware, but fans of the series’ distinctive visual flair won’t be disappointed – it hasn’t noticeably changed. It’s hard to actually call the visuals pretty or sharp, however. There’s a certain level of muddiness to them, whether due to the VR or as a deliberate choice of being in an underwater setting. Sound quality remains constant, which is a good thing. The cast is made up of the same voice actors coming back to recreate their characters, and the music works well. In fact, the game pays homage to Cold War era spy flicks, particularly with its comedic closing theme, a parody of every James Bond title sequence ever.

As a point-and-click experience in spirit, Psychonauts in the Rhombus of Ruin is much better suited to hardcore adventure gamers than its sometimes demanding platforming predecessor ever was, but it isn’t a standout game in terms of enjoyment or quality. It’s a short side mission that doesn’t wow with its puzzles or offer anything revolutionary in terms of gameplay or narrative. But it accomplishes what it sets out to do, by bringing a sorely-needed new dose of Psychonauts to the faithful, or at least those with a PlayStation 4 and a PSVR headset. It neither particularly delights nor disappoints, but marks its place as a competent placeholder in the expanding Psychonauts series, and a reasonable point of entry for those new to the virtual reality experience.

A well-made, pleasant, but ultimately average puzzler with some trademark Schafer charm, Psychonauts in the Rhombus of Ruin is worth the relatively slight investment required for series die-hards with the required hardware.

GAME INFO Psychonauts in the Rhombus of Ruin is an adventure game by Double Fine Productions released in 2017 for PlayStation VR. It has a Stylized art style, presented in Realtime 3D and is played in a First-Person perspective.

What our readers think of Psychonauts in the Rhombus of Ruin