We get a small commission from any books sold.
All Bitmap Books
Written by
Drummond Doroski — January 15, 2018

Best known for off-kilter games like Killer 7 and No More Heroes, Goichi Suda has earned a reputation as one of the more creatively bizarre game designers of our time. When you play a “Suda51” game, you know you're in for something unique. I understood very little of Killer 7’s plot, but that didn't stop me from appreciating its avant-garde style and somewhat entertaining gameplay. On the other hand, I thought the central premise of No More Heroes was brilliant, about a loafer who wants to become the greatest assassin ever and so, naturally, buys what is essentially a lightsaber off the internet. It was also just plain fun, and one of the few non-Nintendo-branded games to cleverly utilize the Wii's motion controller.

Given his more recent successes, Suda51 decided to re-release one of his older games for English audiences, the noir-ish adventure title The Silver Case. Unfortunately, while I can understand his desire for new people to see his earlier work (particularly with a sequel on the way), the game has not aged well. The designer’s signature style works well in action games where, even if you have no idea what is going on, it's possible to enjoy yourself simply playing the game. The same cannot be said here, in a game with very little actual gameplay and a plot that's almost impenetrable. There will be some who praise it as "artistic" and "stylish" and they're not wrong, but that doesn't stop it from being, at its core, a pretty terrible game.

The Silver Case stars a young policeman named Akira, though you can change his name to whatever you wish. His squad is attacked by the notorious escaped serial killer Kamui, an event which Akira barely survives. He is found by the detectives of the descriptively titled "Heinous Crimes Unit", whose cast comprise most of the characters in this game. These detectives inexplicably decide to take Akira along with them as they investigate, and later even hire him into their fold. This was odd to me, because it is made clear early on that Akira is so disturbed by his encounter with Kamui that he is virtually catatonic and unable to speak. The game never seems to establish when this changes, and yet the detectives treat the ever-silent Akira like he's just another member of the team. Silent protagonists are, of course, a very common trope in Japanese games, but usually they're silent by choice, with at least an implied ability to communicate with others. 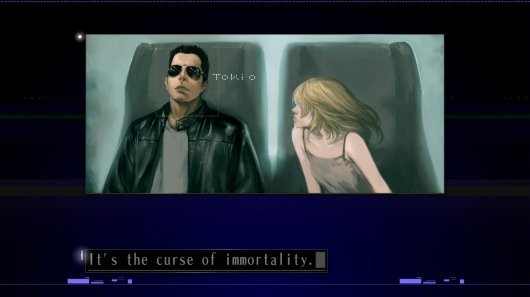 Akira's method of investigation mainly consists of walking around, talking to people, and examining hotspots, all of which takes place in a first-person perspective which you can control with either a mouse/keyboard or gamepad. This approach is not unusual, but it’s a lot more tedious here. A lot of that has to do with the basic design: you have to manually switch between a "movement" mode where you can actively look around your location, and an "interaction mode" in which you can attempt to examine or utilize a hotspot. The constant toggling makes for an awkward and inefficient experience. Perhaps this clunky interface is based on earlier platform designs, but I can't see any reason why the mechanics couldn't have been streamlined for this release.

The cumbersome navigation isn’t helped by the occasionally monotonous tasks the game makes you do. I'm fine with walking around the headquarters of the HCU and talking to detectives about a few things before leaving to investigate a case, but other requirements are unbelievably repetitive. One section has you searching four identical bunker-like structures until your partner talks to you. And when you finish that, your partner says maybe you missed something so you get to check those same four bunkers again. Another segment has you knocking on the doors of no fewer than four floors of apartments interviewing their inhabitants about a recent death, only some of whom have anything to say while many of them don't. It's a grind. Yet even these moments are preferable to the ones where you have no idea what to do next to advance the story. I was stuck for almost fifteen minutes in one area before I finally looked "up" despite the game giving me no indication I should do so. Discovering this gave me no feeling of satisfaction or accomplishment. I hadn't solved a tricky puzzle or pieced together a subtle trail of clues, I had just fortuitously looked in a completely unintuitive direction.

The biggest issue, however, is that even when you're on the right track and the story is moving forward, it's still often dull. Long conversations between characters feel like they last twice as long as they need to, given what you learn from them. Other dialogues are confusingly irrelevant. In one chapter, the game interrupted my investigation to show two other detectives in the HCU on a stakeout talking about money. One of them laments his financial difficulties, and asks his partner for a loan, who refuses but suggests he ask a different detective. The first guy then radios that detective to ask him instead. This is the entire scene. There's no character building or useful exposition here, and it has nothing to do with your task. It's just a complete waste of a few minutes in a game already crammed with a ridiculous amount of excess dialogue to read. 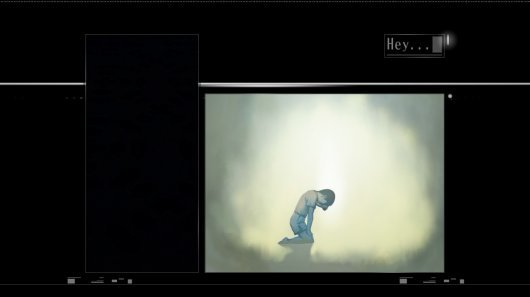 This level of boredom is never more apparent than in the "Placebo" cases, a group of stories running parallel to Akira's but from the perspective of some sort of investigative journalist named Tokio Morishima, who basically spends all his time checking his email or talking to his turtle. Occasionally he'll leave his apartment to go interview someone or other, but these interviews, like all the dialogue here, are on rails and all you can do is read. I'm aware that this game is meant to be, essentially, a visual novel, but the sheer amount of text to wade through is staggering when compared to the miniscule amount that is necessary to tell this story. The first "Placebo" chapter took me around 45 minutes, consisting largely of me watching Morishima learn everything I had already discovered by playing Akira's first case. It was an exhausting and frustrating experience.

There’s more to Akira’s chapters than simply reading, but not much. On one occasion you must crack a series of door codes with the help of your partner, and other times you actually use an item to get past an obstacle, but these are exceptionally rare. Most of the time the closest thing to a "puzzle" is figuring out where to go and who to talk to next. There aren't even really any dialogue choices, which limits the interactivity even more. Who knew being on the Heinous Crimes Unit could be so utterly mundane? 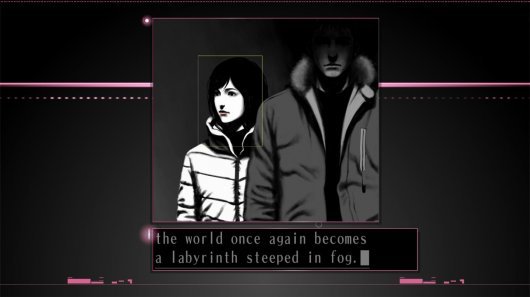 Rounding out the tiresome sections are moments of pure oddity. At one point, a fellow detective asks Akira literally 100 multiple choice questions. A handful of these actually relate to the case, but the majority of them involve everything from Japanese geography to The Simpsons trivia. And Akira's boss, the imposing Tetsugoro Kusabi, gives him the nickname "Big Dick" for reasons unknown. I know weirdness is pretty much Suda51's thing, but here it continually gets in the way of what I think is supposed to be a coherent plot. There's also blatant sexism in the HCU, and I can't tell if this is meant simply to be part of the characters or if it reflects the views of the writers themselves.

All this is not to say The Silver Case doesn't have its good moments sprinkled in here and there. The murder scenes in particular are genuinely disturbing due to their gory hand-drawn images. The character models are also quite good, giving each person a distinctive look, though they don't change expressions in conversation, which somewhat mutes their personalities. Certain scenes are accompanied by more art in this style, often shown in a box on a section of the screen, which gives the presentation a sort of graphic novel feel. Periodically there are brief animated sequences, and even a handful of actual FMV, but such moments are especially infrequent. Unfortunately, none of this can quite cover up the dated feel of the three-dimensional locations you actually interact with, which look shabby in comparison. It doesn't seem to matter if you're in your apartment, at the office, or searching one of those bunkers, the environments all have a blocky, generic quality about them. 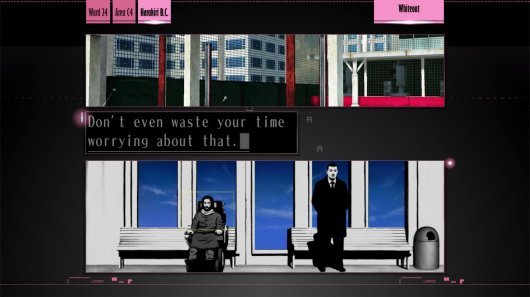 The one area I thankfully found nothing to complain about is the music. The individual tracks suit the various moods of the game well, even if the upbeat main score sounds lot more energetic than the scenes it usually accompanies. It's a throwback to a more ‘90s style of video game music with a decent amount of keyboard and synth. While the songs are incredibly repetitive (they have to be with the length of some of these segments), they never seem to become monotonous. On the other end of the spectrum, all text in this game (and there is a LOT of text) appears with the accompanying sound of a typewriter, and this does seriously wear out its welcome. There's no way to turn it off, and my god do I wish there were.

Overall, I found The Silver Case to be too much style backed by too little substance – or too much of the wrong kind of substance. The usual fun of Suda51's zaniness is distracting more than entertaining this time around, and I would have preferred to more clearly understand exactly what was going on in the story, along with more engaging gameplay to help flesh the investigations out. I can see devoted fans of visual novels enjoying the artistic nature of it without being put off by its long-winded nature and frequent detours into narrative irrelevance. I'm not one of those people, however. Particularly as someone who has enjoyed the developer’s other games, I wanted to like The Silver Case, but just couldn't. Maybe if it had more internet lightsabers.

Review copy of The Silver Case generously provided to us by GOG.com.

The Silver Case is available at:

Perhaps best left locked in the past, The Silver Case is not worth looking into unless you REALLY like visual novels and Suda51 and have a lot of patience.

GAME INFO The Silver Case is an adventure game by Grasshopper Manufacture and Active Gaming Media released in 2016 for Mac, PC, PlayStation 4 and Switch. It has a Stylized art style, presented in Realtime 3D and is played in a First-Person perspective.

What our readers think of The Silver Case