Virtual Reality has the unique ability to make the ordinary feel exotic – the experience itself is pretty psychedelic, transporting you somewhere you can see and interact with but never actually be. It's not necessarily the ways in which it feels real that make this work, but the ways in which it departs from reality. FORM, a new adventure from rookie developer Charm Games, ushers you ever further away from reality into the abstract, with a constantly changing world that remakes itself around you. But even as it weaves its surreal imagery, its puzzles never truly escape the mundane.

The game unfolds in a remote laboratory, investigating a mysterious monolith with untold powers connected to the fundamental aspects of reality. It’s kind of boilerplate pseudo-scientific nonsense, somewhat similar to the “null element” in Fireproof Games’ The Room. While it’s not a very compelling narrative hook, the decision to anchor the story in something resembling reality is a wise one because after the opening scene, you’ll be sent careening into the unreal. Darkness envelops you, dotted by glowing lights and a shifting landscape of primitive shapes that continually change. Mechanical devices of impossible design are placed in front of you, and challenge you to discern their functions. Without the crutch of real-world representation, these simple graphics manage to look pretty nice, paired with an ambient soundtrack that sets the mood. 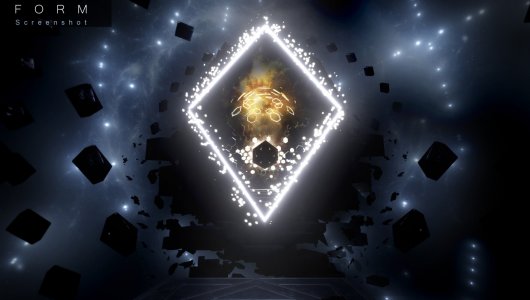 For the most part, there’s very little navigation in FORM. You’re introduced to a simple hub with the ability to teleport in a scripted way, but largely the game takes place in room scale, meaning that the only way to navigate is to physically walk around your play space. Although it doesn’t require a particularly large room, this is not a title that can be played standing completely in one spot, so be sure to clear the immediate area around you.

This setup is immersive. You seldom think about the play space, as the objects that make up the game’s world shift and form spaces around you. Unfortunately, it also has the effect of making the experience quite linear. There’s no exploration component here, or even the ability to do things out of order. You’re simply presented with one puzzle to solve, and then the next, and the next. There’s little sense of progress, as these puzzles don’t develop the story or open up the world, they simply appear and then vanish to make way for another.

The interactions themselves are at least satisfying. I played the game using Oculus Touch, and interacting is natural and intuitive. You can either reach out and grab objects, or point your open hand at them and grab to pull them toward you. Most of the puzzles are, fittingly, based around manipulating objects and test spatial reasoning rather than classic item-verb logic. Here you’ll be moving levers, lining up objects, and turning cranks to unlock the various abstract whatsits. While a few of these puzzles are clever, many of them are common, in some cases literally asking you to fit together pieces like a jigsaw puzzle.

To the game’s credit, these challenges come at a brisk pace and never outstay their welcome. FORM does an excellent job of keeping you engaged enough to want to continue, even in the absence of story or geography to lend a sense of progress. The gameplay itself doesn’t drag on either – it’s divided into three sections that each make for a reasonable play session on their own, and playing straight through won’t take more than a couple hours.

FORM certainly tries hard to make a lot of a little. Its minimalism is hidden capably behind a thick layer of atmosphere and an impeccable sense of surreal style. It’s a great way to lose yourself for a short while, but underneath the veneer, there’s little real substance to be found, either in the threadbare story or the generic puzzle design that is novel only in its use of the medium.

GAME INFO FORM is an adventure game by Charm Games released in 2017 for Oculus Rift, PlayStation VR and HTC Vive. It has a Illustrated realism style, presented in Realtime 3D and is played in a First-Person perspective.

What our readers think of FORM