We get a small commission from any books sold.
All Bitmap Books
Written by
Matthias Glanznig — September 27, 2017

About two years ago, Tokyo Dark was successfully funded through Kickstarter. It is a dark point-and-click adventure game from Cherrymochi, a small Japanese studio founded by Maho Williams, who is from Japan, and her husband Jon, who was born in England. The couple’s cultural blending is strongly reflected in their debut game, which deliberately mixes western and Asian elements. The result is a visual novel-style adventure with an intriguing psychological story, several key decision points, multiple endings (some much better than others) and puzzles that can be solved more than one way, though it’s light on challenge and doesn’t develop its stat-based roleplaying elements as fully as it could.

In Tokyo Dark, we follow the path of Detective Ayami Itō. At the beginning, she is trying to find her missing partner in a dark alley of Shinjuku in Tokyo. Their partnership is not just on a professional level, which makes things even harder on her, especially since his disappearance soon turns out to be a matter of life and death. During the course of the investigation, events become increasingly surreal. Early clues suggest an impossible connection to an older case, one that is linked to a traumatic memory. To get closer to the truth, Itō will have to confront her own past – no matter how close that leads her to insanity. And she'll have to decide how far she is willing to go for the people she cares for.

Itō stands out as an interesting main character with a clear inner struggle. How likable she is, though, depends on our choices. Do we want her to be caring about the needs of others, or perhaps more reckless and only focusing on her own goals? It is also possible to get to know the antagonist of this story a lot better and understand where she is coming from. Several recurring side characters appear too, who may not be as memorable but have their own problems going on. For instance, the owner of a shabby restaurant, who isn't sure if he should continue to follow his dream of becoming a cook. It is possible to help him make up his mind. 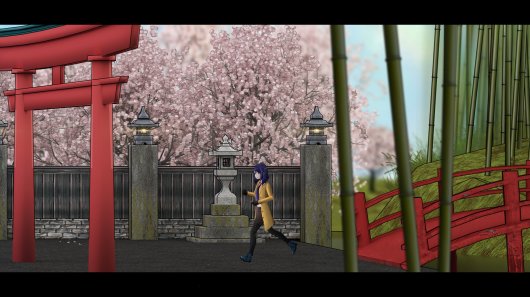 This mysterious investigation leads us to various real-world places in and around Tokyo, such as Kamakura and Asakusa, where we get a small glimpse of Japanese culture and even learn a bit about a well-known myth from this region. Overall, the story is serious, with horror and supernatural elements here and there, such as inexplicable fog appearing out of nowhere, creating a nauseating atmosphere, or a dead person trying to make the detective feel guilty. Situations like these embody what the detective is going through, depicting the things that scare her.

Despite the generally dark tone, however, as with other Japanese visual novels there are a lot of bizarre moments, weird encounters and cuteness along the way, which will probably not appeal to everyone. For example, in a strange cat café, the waitress greets you in a cat outfit and calls you “Mistress”. You'll actually see quite a few cats in your investigation, including the option to deal with a strange case of cat poisoning (if you want to).

Tokyo Dark is a side-scrolling adventure where the player character is only able to walk left and right. This is comparable to The Cat Lady, but mouse control is possible and the game plays like you would expect from a point-and-click adventure. Objects that can be interacted with are highlighted as soon as the protagonist is nearby. When the mouse cursor is pointed at one of these objects, a small square pops up, telling you what actions are possible. Given that this is an investigative game, you can also talk to other characters and ask questions. These inquiries will sometimes give you clues where to look next and what other questions to ask. 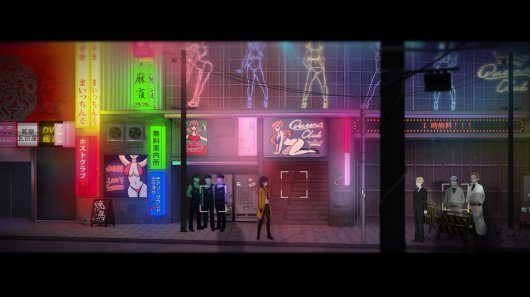 Although the hand-drawn art style is reminiscent of other visual novels and there are many dialogues and monologues to read (there are no English voice-overs, just text), the gameplay is a bit closer than most to the familiar western approach. There is actually a lot to explore and there are decisions to make that can change, for example, how NPCs and colleagues perceive you. Do you want to try to get an answer from a witness by force, or use charm? Do you steal without caring who might see, or take precautions?

There are even some small puzzles that allow for more than one solution. For example, in one chapter Itō is supposed to steal from a secured building. If she helped a certain person previously, she can use that to her advantage to create a distraction. There's a less careful way as well, but this will arouse attention from people who notice the misdemeanor. The majority of puzzles are built around conversation and exploration, and there are no inventory obstacles in Tokyo Dark. One slightly more traditional challenge involves entering a corridor with strange blinking lights. In order to progress any further, you need to find the correct order of these lights. 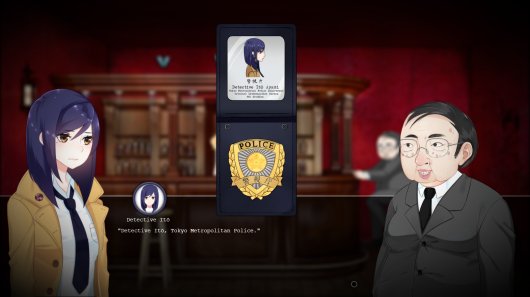 A few time-based events occasionally occur as well. These are situations where our protagonist has only 20 seconds to try to prevent something bad from happening. Asking questions is possible here, or you can simply take action. Story-wise these events make sense, as the game deals with choices on a meta level. However, the execution could have been better: The timer is halted frequently by long inner monologues and dialogues, which inevitably breaks the dramatic immersion. This sort of feels like a 10-second bomb timer in a movie that is interrupted by a minute-long conversation yet still hasn't triggered after that.

There are eleven different endings in this mystery adventure. At least two decision points require going one way or the other. Unfortunately, these crucial choices feel a bit forced in Tokyo Dark, as usually there is no obvious reason for not being able to follow two leads at the same time. It is important to add that not all endings are satisfying. Not in the sense that any are rushed, but a lot of questions can be left wide open and the outcome may feel like a defeat. My first playthrough took me around seven hours, and while the autosave function makes sure you won't lose any progress, there is no way to manually save the game the first time through.

The only way to make sure to get the best possible ending is to start over in New-Game-Plus mode, which doesn’t become available until after you’ve completed the game. Only then are you able to manually save your progress and experiment with different choices. Fortunately most dialogues can be skipped, but often you'll still find yourself replaying a lot of scenes before getting anything new. Moreover, although many challenges can be dealt with in different ways, most of the time an alternate approach ends up being equally simple. For example, either you jump down a hatch without any protection and risk getting hurt, or you click on an object and question an NPC about it. Trying to find different ways to deal with things may not make a second playthrough more rewarding. 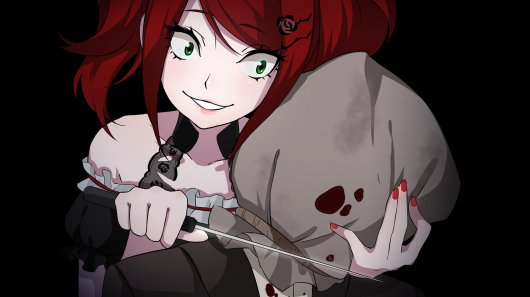 While the majority of choices come with minor consequences, in Tokyo Dark it is relevant to consider how each option affects the personality of the young detective. Many actions result in attribute points for Sanity, Professionalism, Investigation, and Neurosis (S.P.I.N.). Examination of your surroundings will earn points for Investigation. Drinking alcohol in a bar while on duty might help get information faster but remove a couple of points for Professionalism. Interestingly, it is also possible to take medication at home, which improves your Sanity while having a negative impact on the Investigation rating. The only problem is, although this S.P.I.N. system sure sounds intriguing, it doesn't appear to have that much impact on the story unless extremely negative values are reached, which seems unlikely to happen under normal circumstances.

The 2D environments are fairly simple in design and most come with dominant black outlines, which looks unfavorable sometimes. There aren’t too many unique locations, so most of them you'll see more than once as your traverse gritty urban alleys. Much more impressive visually are the professionally animated cinematics made by Graphinica. These scenes are usually short and rare, but they are always a welcome change and add a lot to the atmosphere, like when the main character jolts back to reality from a frightening experience, like after a bad dream. Another thing that helps a lot is the soundtrack from Matt “Bison” Steed, who is the frontman for the British band Reign of Fury. He understands how to mix various electronic, experimental and orchestral elements to support the dark nature of the game, yet still make it fit the sometimes very cute anime look.

Summing up, this anime thriller from Cherrymochi starts with an intense atmosphere but after a strong beginning, things slow down a bit. The experience is still enjoyable but doesn’t pose much challenge and some parts may feel a bit like filler. During the last third, the dark mystery story regains its pace, and it's not that easy to find the best choices. Unfortunately, not all endings are satisfying and the prospect of having to replay the game mainly to get a better outcome may not be worth it for everyone. Then again, if you are lucky enough to get a proper ending the first time through, you might not have a problem here. Ultimately, even though Tokyo Dark doesn't quite live up to its full gameplay potential, it still offers an entertaining experience that gets especially interesting when it blends real places, fiction and Japanese myth.

This article also appears on the German website Adventure Corner. It has been translated and reprinted here with permission.

Although falling short of its full potential, Tokyo Dark tells an intriguing mystery story and nicely integrates elements of both western and eastern cultures, combining point-and-click adventure-style exploration and simple puzzles with visual novel-length conversations and multiple endings, some more satisfying than others.

GAME INFO Tokyo Dark is an adventure game by Cherrymochi released in 2017 for Mac, PC, PlayStation 4 and Switch. It has a Stylized art style, presented in 2D or 2.5D and is played in a Third-Person perspective. 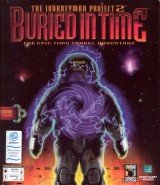