The Shine of a Star

We’ve all dreamed about being able to fly. What freedom, what excitement, what limitless possibility! Of course, since we can’t do it for real, taking flight in a video game may just be the next best thing. Forgotten Key’s Journey-esque adventure game AER: Memories of Old is a frequently beautiful and occasionally frustrating experience powered by the ability to soar through the air as a magical being who can shapeshift into a bird. It offers a number of memorable moments, and the gameplay is at its best when it allows you to freely explore the world and learn about the people, their history, and the scourge that continues to threaten their way of life. Unfortunately, players are also given a series of repetitive tasks and finicky action segments to contend with, which ultimately tarnish the experience. There’s fun to be had, for sure, but you’d better brush up on your platforming skills before sailing these breathtaking skies.

I'll be honest: For the first hour or so, I had no idea what I was doing or where I was going in AER. I don’t necessarily need my hand held or require a bunch of tutorials as soon as the game kicks off, but a little guidance goes a long way. Sure, I could fly between the plethora of floating islands with remarkable ease and interact with the gorgeous environments (including making a lamb think I was its mother), but I just couldn't get my bearings. Thankfully, I noticed some pillars of light emitting from a nearby island, and I decided to take a look. After landing, stumbling around, and pressing a few random buttons, I finally started making progress, yet even then I wasn’t sure I was moving in the right direction. The first key – and soon, the first temple – was within my grasp, but I had to take multiple stabs in the figurative dark to find my way. I'm not sure if that has more to do with my ability to comprehend the game or the developers not giving me enough to work with right out of the proverbial box. Regardless, the learning curve was real, and it definitely colored my experience going forward.

During that admittedly difficult 60 or so initial minutes of gameplay, I wondered if I'd made a serious mistake taking a chance on AER. Thankfully, once I began moving forward, this magical world filled with enchanting spirit animals and the ghosts of previous inhabitants opened up, and I started to appreciate several of the game's amazing elements. It’s a pretty quiet affair overall, with subtle sound effects and light ambient music underscoring the adventure. Stumbling across a gathering of crabs, watching rabbits hop around in a small patch of grass, and observing fish splash about in a pond, all rendered in a beautifully stylish low-poly presentation, helped illuminate this magnificent realm, and I succumbed somewhat to AER's many charms. The gameplay, alas, never does become nearly as charming. 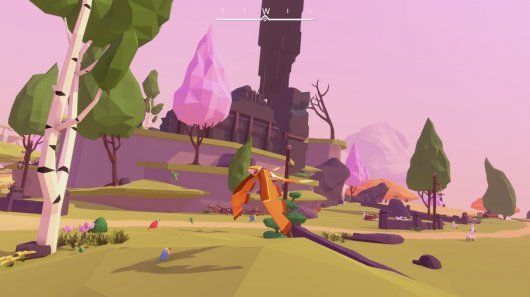 Players assume the role of Auk, a young woman who seeks to reunite her world, which was shattered into fragments and scattered to the sky, where they now reside as islands. Armed with a mystical lantern and the ability to transform into a majestic bird, our heroine takes to the clouds in order to restore peace and destroy an all-consuming enemy known simply as “The Void” (think “The Nothing” from The Neverending Story and you've got an idea of what this entity is all about). Aiding her in this quest are a handful of so-called Caretakers, who each possess part of a shattered stone that should, in theory, reverse all of the damage wrought by the nefarious Void. The hidden temples, which protect the pieces of this stone behind a series of puzzles, are scattered on different islands, so you'll need to utilize Auk's handy shapeshifting ability to locate each one.

During your expedition through this colorful world, you'll fly from one region to the next, landing to overcome obstacles that involve light on-foot platforming and unlocking doorways with some assistance from your trusty lantern. AER's puzzles come in the form of various switches and platforms, which you’ll need to complete in order to successfully navigate the temples and restore peace to the land. Depending on your action gaming ability, these challenges range from moderately difficult to expletive-laden tests of willpower. Since my arcade skills are admittedly a bit weak these days, I sometimes found myself plummeting to the bottom of a deep shaft after I'd spent a good ten minutes working my way toward the top. In one particularly frustrating moment, I had to navigate several spinning gears to reach my destination. Again, since I'm getting a little rusty in my old age, completing this section pushed my ability to remain calm to the brink of disaster.

I'm a typically level-headed gamer – at least that's what I like to tell myself – and I rarely become what some might call enraged while playing an adventure game. However, I've never been particularly good at platformers, even when the challenges aren't what many people would consider difficult. AER demanded a bit too much from me at times, and put my even-keeled gaming nature to the test on several occasions. On the PlayStation 4, the controls aren’t overly responsive; I’d frequently find myself falling simply because the jump button didn’t seem to react to my commands. (The PC’s keyboard-mouse combo is equally functional but has a similarly loose feel.) I also found myself fighting with the camera as I attempted to discover the correct way through an area. I’m willing to accept some of the blame, but were the controls a little tighter, that sense of frustration might have been significantly alleviated. 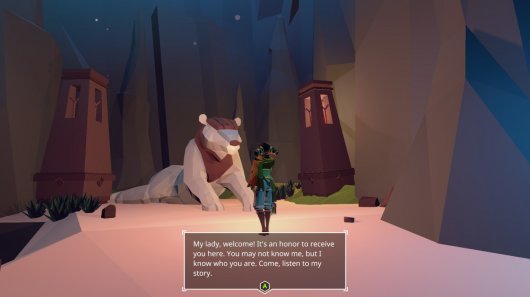 Once you've completed a temple and emerged with a new piece of the puzzle, you'll take to the skies once again. This, above all else, sets AER apart from its contemporaries. Sure, it feels and looks a lot like Journey, but its flight mechanics are really what make this stand out. With two presses of a single button, Auk transforms into a bird and soars through the air, sailing through clouds and in between islands with ease and fluidity. It's an almost perfect experience, and traversing the world becomes an absolute joy. It's a shame, then, that the meat of the game – the puzzles – don't offer the same sense of satisfaction. In fact, outside of a few instances, flying doesn't really factor into the tasks you'll need to complete to move the story forward. Since it's such an integral part of the playable character, I'd hoped it would be more relevant to the core story.

Even without a more tangible connection between protagonist and narrative, AER’s storytelling ability still manages to shine. Granted, there aren't too many living characters to interact with during your journey, but that doesn't really matter; you'll learn everything you need by properly investigating the rich history at your disposal. Of course, how much you take away ultimately depends on you. If you're in a rush to get through the game, you can knock out the main story in about six hours, assuming you don’t get hung up on all the running and jumping. However, if you choose to avoid the tiny white icons sprinkled throughout the realm, you'll miss out on a tale filled with intrigue, drama, sadness, and hope.

Using her trusty lantern, Auk can illuminate these icons (which one character describes as resembling fireflies) and literally shed some light on the past, including those who once called this world home and how The Void essentially ruined their lives. These little moments, which unfold through text and a few ghostly images, give you some much-needed insight, whether it's a snippet of conversation between friends or a wordless snapshot of what they were doing at that moment in time. Such blink-and-you'll-miss-them interactions, alongside several scrolls and etchings, are what really help AER sell its story. They’re not essential to enjoying the game, but they help things tremendously. 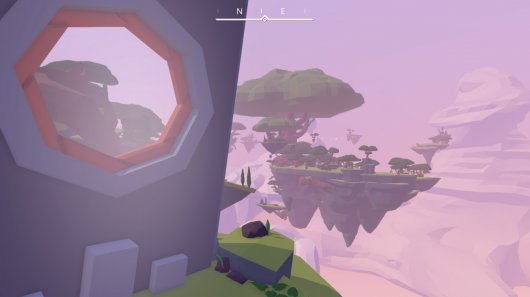 Once again, it’s unfortunate that the gameplay doesn't come close to matching the world's quirky richness. Variety is the spice of life, or so the old adage claims, and here the lack of puzzle diversity makes the game feel a little stale. If you have this wonderful setting overflowing with style, alongside an incredible story that you uncover along the way, why water down the experience by presenting the same set of challenges over and over again? It's just a little too samey, a bit too much "been there, done that." A game that strives to tell this kind of epic tale needs to do more than simply ask us to stand on switches and pedestals while leaping from one similar-looking platform to another. AER's brilliant flying ability, beautiful polygonal presentation and hidden backstory set the bar high, and the gameplay simply can’t keep up.

If you can overlook the shortcomings and embrace this game for the things it gets right – particularly that smooth-as-silk flight mechanic – there are certainly reasons to follow it all the way to its narratively satisfying conclusion. The charming character design, atmospheric world, and engaging lore will temporarily help you forget that you're essentially just hopping around most of the time. But then, particularly if your platforming skills need polishing, you’ll be reminded again all too soon, and your play time could fluctuate dramatically depending on your dexterity with a controller. As it stands, AER: Memories of Old is notably flawed but a feast for the eyes, and if nothing else, you can spend as long as you want flying gracefully from one floating island to the next.

AER creates a beautiful fantasy world with a wonderful flying mechanic to explore it, but ultimately doesn’t give players much to do besides repetitive platforming puzzles.

What our readers think of AER: Memories of Old

As the reviewer points out, there is a bit of platforming. I found the platforming to be quite light, although the controls aren't great. The flight mechanic is very nice when you're soaring, but also... Read the review »