Maggie’s Apartment is a single-setting point-and-click adventure that casts players in the role of title character Maggie Mallowne, girlfriend of superstar entertainer Randy Rosebud. While the game initially seems like it has the makings of a lighthearted adventure, the plot becomes something deeper as players explore the apartment in which Maggie lives, eventually dealing with mature subject matter and unveiling a central mystery to solve. Perhaps the standout feature is the graphics, hand-drawn by the game’s developer and CalArts student, Anatola Howard, whose flowing, distorted lines and eye-popping touches of color belie the game’s darker narrative. The item-based puzzles are fun, and even though the lower difficulty might disappoint players expecting more of a challenge, the casual nature of the gameplay allows the story and wacky characters to take center stage.

The tale opens with Maggie and Randy watching TV together when a commercial for a local meat company appears. Mysteriously, this angers Maggie's star boyfriend, and after a few moments he leaves the apartment, dressed in an identity-hiding trench coat and hat. Soon after, a lockdown is announced for the apartment building. Thus, Maggie is left solely in the company of her surroundings, seemingly without much to occupy her time.

Luckily, Maggie is willing to comment on just about everything in her apartment, allowing us to slowly learn more about her and her relationship with Randy (a tall, pink-haired music star vaguely reminiscent of Elton John). In this respect, Maggie’s Apartment has a few surprises up its sleeve. What first appears to be a game about an immature girl’s infatuation becomes much more complex than even I was expecting, despite the early hints that things might not be exactly what they seem. 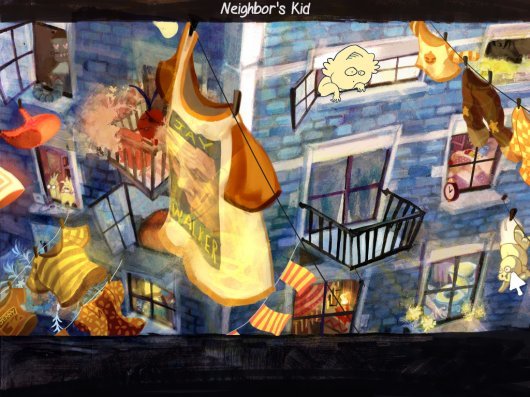 Due to the slow-burn nature of the plot, I wouldn’t exactly consider it “twisty” in the conventional sense, nor is it especially oppressive in its darkness. Rather, it is layered a bit like an onion, where learning about an apparently innocuous object simply raises more, sometimes disquieting questions about its significance, eventually leading up to the game’s central mystery (which of course I won’t spoil) for you to piece together.

Exploration quickly reveals that, in addition to the Randy Rosebud memorabilia she gushes about, Maggie is accompanied by an oddball cast of characters, both within her apartment and outside it, such as Beauty, an anthropomorphic radish and Maggie’s best friend, and Dunc, a philosopher-cactus who lives in Maggie’s closet and suffers from an existential crisis. Several characters remain unseen, to whom Maggie talks through the walls, such as Shrimp, a computer whiz-kid who lives next door, and Hector Cheese, sleazy writer of romance novels.

Despite the “cuteness” of the setting and Maggie’s overly-excited reactions to the items decorating her home, Maggie’s Apartment isn’t especially kid-friendly. The story deals with adult topics like obsession and the desire for fame, and includes vaguely sexual content sprinkled throughout. There’s also a bizarre sequence in which Beauty the radish implores her friend to literally eat her during a crucial moment. The conspicuousness of this sequence left me wondering what the point of it was, especially in light of indications that it has deeper meaning. If nothing else, it fits well with the bizarre overall tone of the game, and gives the player something to ponder after the game is over. 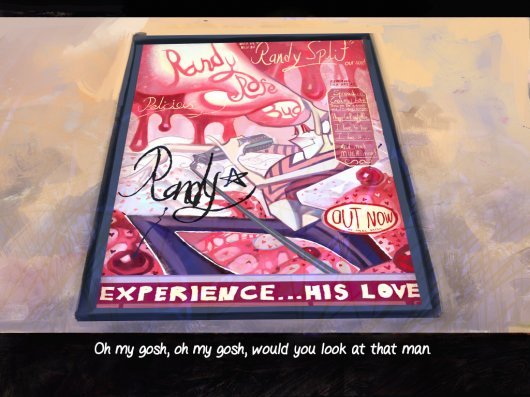 Gameplay will be largely familiar to adventure veterans. Control is entirely mouse-driven and clicking on hotspots allows interaction with them using a simplified interface that depends on context. For instance, clicking on Beauty while standing next to her will automatically begin a conversation, but clicking while gazing down at her from Maggie’s apartment window will result in a simple comment about her. While interacting with items is part of the game, there is no inventory. Instead, you simply click and drag items from one place to another to combine the two objects, if allowed, though your action will be met with silence if they cannot. Typical tasks include helping Maggie’s next door neighbors through a rough patch in their relationship, convincing a police officer to investigate a crime, and filling Hector Cheese in on juicy apartment gossip.

Conversations are managed through a dialogue system where you click on a topic or sentence to talk about it until all options are exhausted. It is possible to entirely miss out on comical conversations because of some branching in the dialogue, but this unfortunate possibility doesn’t impact the course of the plot. 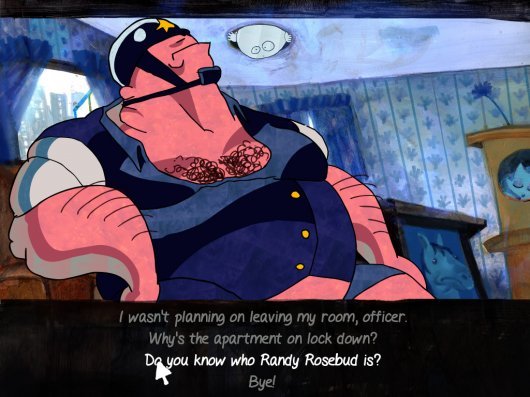 With one spoiler-ific exception near the end of the game, puzzles are item-based and include such tasks as retrieving beer for another character from a fridge in your apartment, and making a long pole to grab an object through a hole in the floor. Most are not difficult, but some solutions are vague. A couple of times I was stumped while figuring out what to do next. Luckily, the tried-and-true “click everything” approach, coupled with some thought about what I was supposed to achieve, pushed me through these mild tough spots. There is no hint system or hotspot highlighter, but even the latter is of no particular concern since it’s clear most of the time what you can and can’t click on, while at plot-appropriate moments a few characters can be asked what it is you are supposed to be doing if you need a reminder. Those more interested in the story and characters will likely find this relaxed approach a welcome change of pace from the obtuse brain-teasers that traditional point-and-click adventures are known for. I certainly appreciated the ability to focus on the plot development, even if I would have enjoyed a steeper challenge.

From the moment you boot up the game, the hand-drawn graphics of Maggie’s Apartment impress, even if the art style itself won’t be to everyone’s taste. Anatola Howard’s illustration style is highly distinctive, with a flowing, distorted look that is almost surreal in its effect. This is especially evident with regards to the characters. One notable example is the policeman Rascal (pronounced rass-CAWL), whose bulging gut and tentacle-shaped arms and legs make him resemble an octopus more than an officer of the law. The bright pastels that make characters such as the lanky Randy Rosebud and various items around the apartment visually “pop” are balanced out by earth tones, ensuring that neither boring nor garish coloring dominates.

Animations have also been created by hand, and the attention to detail is notable. Actions are accompanied by their own animations, so that clicking on a drawer to look inside it has a vastly different result than clamoring up onto a couch to peer out a window, which is altogether unique from, say, Maggie pressing her face against a wall to talk to the computer whiz-kid next door. It’s a subtle technique, sure, but it really sets Maggie’s Apartment apart (no pun intended) from other titles where stock animations are the order of the day. 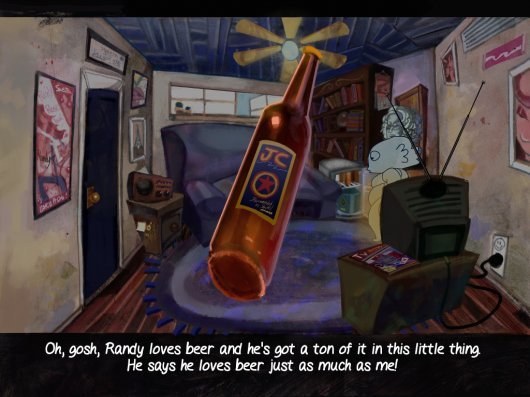 The music consists of only a few tracks, but the minimalist vocal style, combined with its default low volume, keeps it from becoming repetitive or annoying. Rather, it provides atmosphere without intruding on the gameplay. Much like the graphics, it may not appeal to everyone, but it is absolutely distinctive, reminding me a little bit of the singer-songwriter tunes “indie” radio stations often play. Sound effects are as quirky as the rest of the game, featuring such details as cartoonish honking when Maggie lands on the floor after climbing through a window, sizzling noises from a barbeque grill, and the ever-present radio playing various songs, punctuated with the occasional cut-in from the station DJ.

Intriguingly, the radio also doubles as a part of the interface. There is no “escape menu,” but clicking on the radio provides a way to adjust the audio levels, save and load the game, and go back to the title menu, from which you can exit cleanly. It’s a little disorienting at first, since it goes against the standard routine so ingrained in gamer reflexes, but once you understand what to do it’s no problem.

Saving can be done any time the radio-menu is available, which means that if you have made an excursion outside the confines of the apartment, you’ll have to re-enter it in order to record your progress. However, there are only a handful of times that Maggie leaves her apartment so this is, if anything, a minor annoyance. And that’s assuming you need to save at all. The game is perhaps deceptively described as a “one-room” adventure, since eventually Maggie ventures forth from that room, but the game is still a compact experience. I was able to finish in a single long session, but with playtime clocking in around 3-4 hours, that’s a little bit on the long side to do so comfortably.

I was initially intrigued by Maggie’s Apartment mainly on the basis of the surrealistic art style and a story that seemed like it might be out of the ordinary, and it did not disappoint. Though perhaps an acquired taste for some, I found the graphics impressive, especially since they were both hand-drawn and animated by a solo developer. Perhaps the most unexpected aspect of the game is that the lighthearted environment gives way to an exploration of dark themes rarely explored in videogames. It’s not especially oppressive, but it can definitely be a bit weird. Complementing the story, the sometimes comical dialogue helps make up for the lack of challenging puzzles. Ultimately, this is a bizarre little game that hides a thought-provoking narrative beneath its cotton-candy exterior and strange characters. If you’re in the mood for a relatively quick jaunt through a strange-but-fun game, Maggie’s Apartment should be just the ticket.

The surreal presentation may draw a lot of the attention, but Maggie’s Apartment proves equal parts strange, artistic, and entertaining as you slowly peel back the quirky layers of a mystery that proves deceptively deep.

GAME INFO Maggie’s Apartment is an adventure game by Anatola Howard and Duncan Cross released in 2017 for PC. It has a Stylized art style, presented in 2D or 2.5D and is played in a Third-Person perspective.

What our readers think of Maggie’s Apartment