If Journey and Monument Valley had a child, it might look a lot like Pan-Pan. Developed by one-man Swedish indie Spelkraft, Pan-Pan is a brief, charming adventure that, despite looking a lot like a platforming title, focuses on overcoming obstacles and exploring a brightly-colored world filled with odd creatures and mysterious environments. There's barely any story, and some backtracking plus a glitch that causes continuous popping anomalies to invade the soothing, somewhat dynamic soundtrack mar the otherwise great experience, but those who enjoy puzzle-solving and light-hearted adventure will love this little gem even with its issues.

Pan-Pan puts the player in control of Ada, who crash-lands (with a little help from you) her malfunctioning hot air balloon-style ship at the start of the game. Ada wakes up to discover that she has been rescued by a strange group of bearded creatures who are attempting to repair her craft. In order to complete the repairs, Ada must find and retrieve several items the creatures need to power their machines and get her airship working again.

Aside from the context provided by these opening scenes, Pan-Pan mainly focuses on puzzle-solving and exploration rather than telling a story. This is emphasized by the fact that none of the characters actually say anything intelligible, instead using a series of grunts and squawks combined with camera choreography to get their points across. For instance, clicking on one of the critters trying to repair the ship will result in the character “speaking,” followed by the camera panning over to one of the slots into which a necessary item must be placed in order to power the vehicle again. 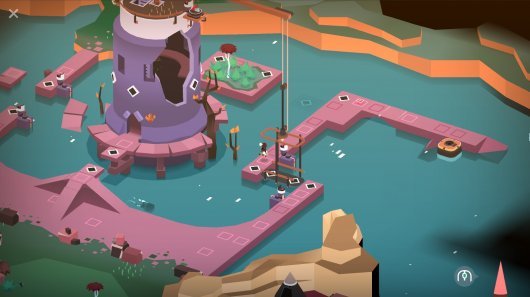 This approach works well enough, though I did suffer some confusion initially about what it was I was expected to find, which cleared up when I began exploring. One other relevant point is that, despite using unintelligible language, each character in the game possesses a unique “voice,” providing just that extra bit of polish to make an otherwise utilitarian aspect of the game more noteworthy.

The game is mouse-driven and played from an isometric third-person perspective. You simply click on the ground where you want Ada to go or on an item you want to manipulate. The camera can be freely rotated and zoomed in or out by holding down the right mouse button and dragging, allowing a better view of the scene. Unexplored areas begin shrouded in darkness that becomes illuminated as you move through the environment, avoiding loading screens of any kind. Special pedestals positioned at various points throughout the land allow you to save your game, even those you might already have used when passing back through areas previously explored.

Gameplay consists of scouring the world for the items needed to progress and repair the ship, while finding ways to bypass the various locked doors, creatures, and environmental obstacles that block your path along the way. One puzzle involves using stone-like power sources to open doors in a maze of rooms, while elsewhere Ada and another character must mirror their movements to step on a sequence of floor tiles in a certain order, to name just a few examples. There are some head-scratching challenges that end up being quite satisfying to solve. 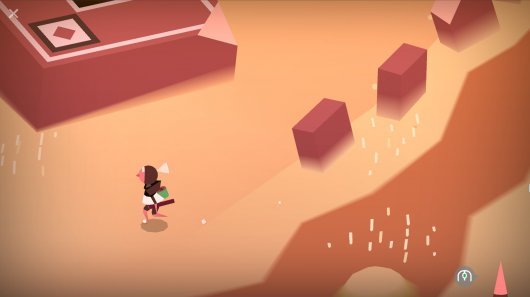 While there are puzzles which could be described as inventory-based, most of the items found throughout the game can only be carried one at a time. There are exceptions to this rule, however. You will eventually gain the ability to gather small glowing orbs, which are used to power various devices and may be carried in any amount. You also find a stick that must be used to complete various puzzles, including one that is timed, although it is quite forgiving for less dexterous gamers. For anyone averse to depictions of violence against animals, this same puzzle features an unavoidable sequence in which you must knock a large bird on the head, though it is mild and played for comic effect.

While the gameplay exhibits polish and thoughtful design, you will likely see many familiar puzzle types throughout Pan-Pan, something that could have resulted in a fairly ordinary experience. However, the quirky characters, bright color palette, and intriguing environment filled with waterfalls, ancient ruins, and strange creatures infuse the game with a sense of wonder that makes the gameplay more engaging than it might otherwise be. Certainly there are some fun challenges, but players expecting puzzles as unique as the art style won’t find many of those here.

Although the game is brief at around 2-3 hours, I experienced some backtracking through already-explored areas. It’s a rather minor annoyance, but can become tedious if you are unsure of what to do next, or if you carry an item somewhere thinking you need it only to discover that it isn’t necessary – or worse, that it actually belongs somewhere else. This didn’t happen often, but the few times it did occur were frustrating. On the plus side, there’s a certain non-linearity to the game which allows you to explore several areas at the same time. Also mitigating the annoyance is Ada’s fairly swift movement speed, striking a nice balance between a flat-out sprint and something more leisurely. 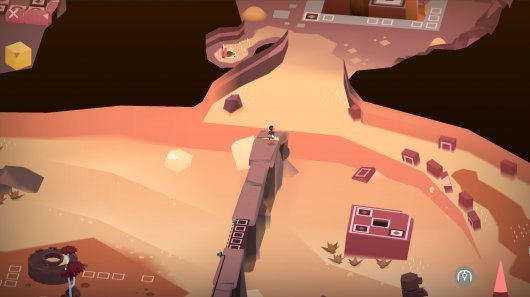 In the screenshots I saw prior to playing Pan-Pan, the whimsical graphics were the first thing that caught my attention, and they don’t disappoint in action. The pastel colors are cheerful and the blocky, geometric creatures and environments are almost child-like in their simplicity. Despite Ada not being alone in the world, a feeling of solitude and mystery is infused throughout the game that makes it a pleasure to explore. Ancient ruins are mingled among high-tech machinery (including bizarre cube-shaped tunnel-digging robots) in a way that’s reminiscent of games like Myst, details that left me wondering about the history of this world. While such questions are left unanswered, it’s impressive to me that a game that seems on the surface like nothing more than a cotton-candy experience managed to evoke such a contemplative mood.

The downtempo soundtrack perfectly accompanies the generally laid-back, otherworldly nature of Pan-Pan. Percussion instruments punctuate flowing electronica tunes, while the few quick-paced moments are heralded by appropriately fast-paced tracks that fade in and out seamlessly with the change in action on-screen. Unfortunately, from the moment I began playing I noticed a continuous popping sound that I never could eliminate. Whether this is a technical glitch with the game itself or a compatibility issue with my system I do not know, but it is an unfortunate distraction that I had to get used to in order to ignore it. 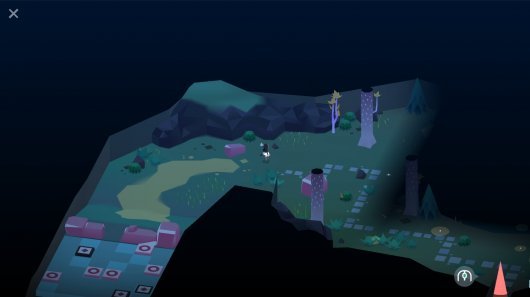 Much like the music, Pan-Pan’s sound effects are wonderfully immersive, with footsteps that change depending on what surface Ada is walking on, burbling water in ponds and streams, and clanging sounds when using your stick on metal objects, among others. There truly are an astounding number of sound effects in this game, and almost all of them are effective and add something interesting to the experience.

This game might be short, but sometimes it’s better to be left wanting a little bit more time with a game than for it to wear out its welcome, and that’s ultimately where Pan-Pan succeeds. The puzzles, while not being as unique as the art style, are well-designed and provide some fun challenges, while the whimsical and otherworldly environments exude mystery and, occasionally, wonder. The soundtrack, despite being marred in my playthrough by popping artifacts, is an excellent accompaniment to the gameplay. In the absence of any real narrative, games live or die by their puzzles and presentation, and in this case, Pan-Pan is very much alive, and definitely worth your time.

While the story is anything but deep, underneath Pan-Pan’s pretty face beats the heart of a solid puzzle-adventure that provides a couple hours of light-hearted entertainment.

GAME INFO Pan-Pan is an adventure game by SPELKRAFT released in 2016 for Mac, PC and Switch. It has a Stylized art style, presented in Realtime 3D and is played in a Third-Person perspective. You can download Pan-Pan from: We get a small commission from any game you buy through these links.
The Good:
The Bad:
The Good:
The Bad:

What our readers think of Pan-Pan