Being a teenager can be tough. Along with all the hormones and other weird changes going on, you start to realise that your parents won't let you do anything fun, because it's not safe. And safety is the thing that really matters, more than fun and having adventures. Maybe you wondered what happened to make them that way, or maybe you were too busy rebelling to care. Well, the folks over at Enlightened Games are clearly in the former camp. The first chapter of their new episodic series, The Song of Seven, is about growing up, exploring and finding out the real reasons why the people of a small, remote village are so afraid of the world. Entitled Overture, this debut instalment is a delightful ride, inviting you to travel through a gorgeous countryside and meet idiosyncratic people. The puzzles may not be the most challenging, and there's a bit of a speed bump towards the end, but if you relax and go with the flow it's a thoroughly entrancing experience.

The world of Pria is lush, colourful and varied, but (at least as the story opens) mostly hidden from the residents of Kami Village – a village surrounded by a stout wooden fence, which in turn is surrounded by forest, then water, then an encircling range of mountains. They're as cut off from the rest of the world as it's possible to be, and that's the way they like it. The outside is a dangerous place, full of disease, vicious animals and other hazards. It’s so much better to be safe inside their walls. Even when a baby orphan girl mysteriously turns up on their doorstep, they prefer to banish the man who dared to take her in rather than risk the change (and possible foreign germs) she was bound to bring.

All in all, rather a stifling environment for a teenage boy. And Kiba, the hero of the piece, is very much your typical teenager, other than his elf-like ears and a long swishing tail. Basically a good kid who loves his parents and does what he can for them, he's more curious about the outside than afraid. When he's given the all-important job of fixing storm damage to the fence and meets an impish stranger called Emma, it stirs up in him a mixture of excitement and fear. Is she playfully trying to get him to follow her into the forest, a temptress who'll bring his world crashing down around him, or just the breath of fresh air he needs? 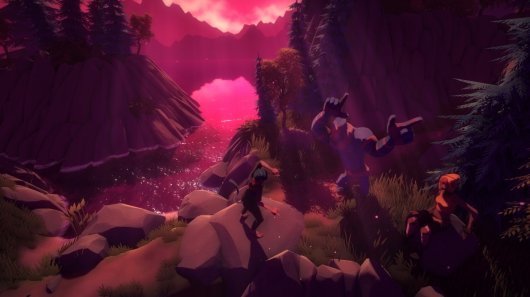 What follows is a tale of adventure and exploration, featuring (among other things) a magical lyre, an enigmatic stranger and a lost god. Kiba winds up dancing with a gorilla, swooping like a bird in a ramshackle flying machine, and outsmarting his deepest fears. Pria and its gods (the titular seven) are deeply intertwined, but this is only the overture, and it leaves much unanswered. Even so, it tells a self-contained story, a journey of self-discovery for both Kiba and the villagers. There's a reason why they're so withdrawn and afraid, and it runs deeper than anyone could have imagined. As the narrative winds its rambling way to a satisfying conclusion, the only hint that this is anything other than a standalone tale comes right at the end, when it becomes clear that the world outside Kami Village has problems too, problems that the newly-heroic Kiba and Emma are ideally placed to help with. 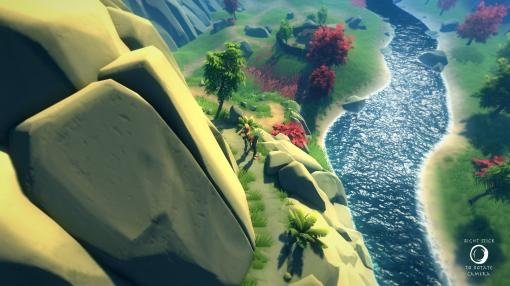 If I had to use one word to sum up The Song of Seven, it would be charming. The delightful 3D graphics look lovely enough in screenshots, but that's nothing compared to seeing them in motion. Long grasses sway and trees shiver in the wind, casting dancing shadows all around you. The world feels alive, while the light rustling and soothing music make it feel peaceful and safe. (For the most part, at least; it does subvert this on a couple of occasions, to great effect.) The style treads a line between realism and out-and-out cartoon, taking generally realistic shapes and structures and rendering them with a light, artistic touch. Many surfaces are almost flat colour, while even materials like wood and stone are displayed with simple textures that do just enough to create the right impression. On the other hand, it feels like every leaf and blade of grass is animated individually, making it all feel startlingly immersive. What really brings everything together, though, is the play of light and shadow, from flickering candles to hazy sunshine through the trees. There's also a slight dreamy softness to everything, enhancing the fairy tale feeling. 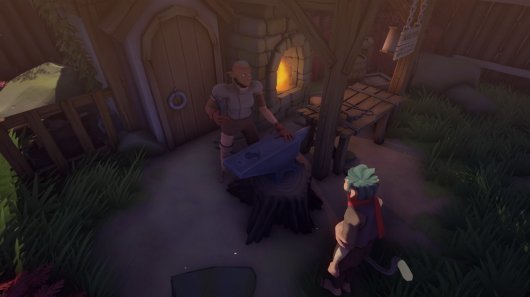 Kiba's world is rustic but beautiful, ranging from the simple wooden dwellings of Kami Village and an eclectic treehouse in the woods, through mountain passes, rivers and verdant valleys. It's full of rich, vibrant colour as well: the trees aren't content to settle for dull old green all the time, branching out into deep blues and russets in places. The sky, too, varies from a sharp, vivid blue to astonishing purple sunsets. At one point, hanging out on the deck of the treehouse, looking out over the shimmering forest to the mountains beyond, outlined in the setting sun, I just wanted to kick back and enjoy it for a while. If I'd been Kiba, I'd never have left! 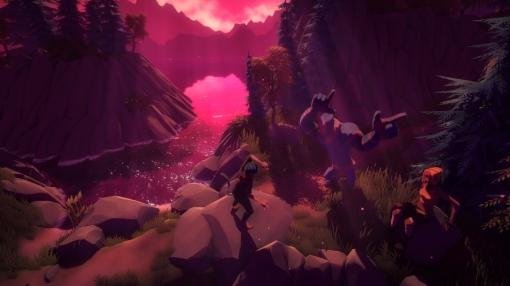 The soundtrack is gentle, but still manages to convey a sense of youthful energy and wide-eyed wonder. Some scenes need just a background of rushing wind, buzzing insects or calling birds, while others get recurring themes played by piano, strings or pipes which are by turns soothing and more lively. The only fly in the ointment is the voice acting: there isn't any, the game relying instead on speech balloons. This is understandable for a small indie development team, but it's a shame given how polished the experience is in other ways. 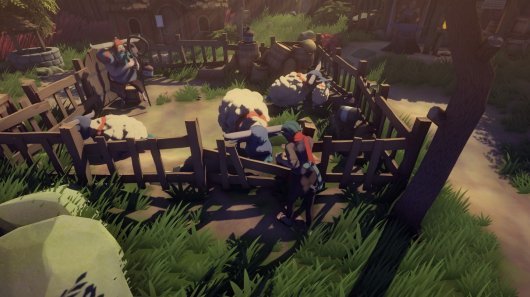 Interaction is pretty standard, though oddly it tends to favour the right mouse button over the left: you right-click to interact with objects and characters in the world and only left-click to use objects from your inventory. Said inventory (a bar across the bottom of the screen) can be shown or hidden via the tab key, and supports item use and combining as usual. Mousing over something you can interact with gives it a bluish glow, and you can highlight all hotspots in a scene via the E key. It's a nice, streamlined system that usually works well, but I did find that it was sometimes tricky to make things highlight: either I'd need to position the mouse pointer to the side of an object rather than directly over it, or I'd need to be standing in the right place in the scene. At one point, I knew I needed to speak to Emma, but had to fiddle around quite a bit to be able to. Thankfully, this happened only rarely, but it could be frustrating.

The game uses a mix of presentations, some with controlled camera views and others that allow you to rotate the camera by left-clicking and dragging. Mostly the rotatable areas play the role of a world map: you're simply travelling from one location to another and there's nothing to do there as such, other than admire the beautiful scenery. They're also shown from a high aerial perspective that gives you an overview of a significant chunk of the island. In some ways, this is a good idea – it's less immersion-breaking than a simple 2D map with hotspots, while still allowing you to travel fairly quickly from one spot to another – but in practice these scenes are extremely linear, with only one available destination at a time. This mechanism also pops up again during a late-game maze, where it doesn't work nearly as well (but more on that later). 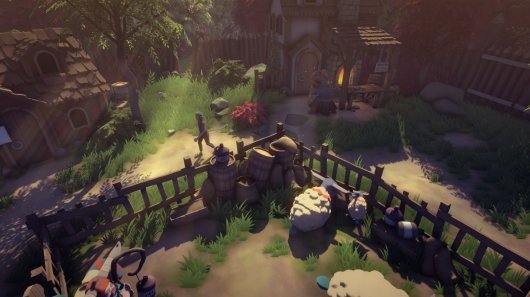 In the camera-controlled areas, movement involves the standard WASD scheme, which moves you with respect to screen orientation, not Kiba's. This means that as the camera moves, your direction moves too; you can't just hold down W and expect to walk in a straight line. While that is mostly fine, it required me to continually keep track of the camera panning and adjust accordingly. For example, in Kiba's village you can wind up running in circles thanks to the way the camera moves, and at another point you can find yourself running back and forth between two locations due to a sudden shift in perspective. It all feels far more intuitive using a controller, which the game didn’t fully support initially, only adding it in after launch. The interface buttons feel as backwards as the mouse controls, but eventually you get used to it. 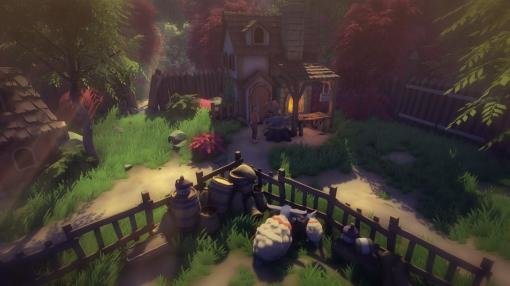 The puzzles feel like they've been drawn from an adventure game puzzle sampler. Along with the usual inventory manipulation, there are tunes to play on your lyre, patterns to repeat for a friendly gorilla, and a maze to navigate. For such a story-heavy experience, it manages to pack a lot in. Curiously, though, it's divided into sections: the first third is all inventory puzzles, but then your inventory takes a back seat and each of the other types take its turn.

If you've got a tin ear or you're just not a fan of music puzzles, don't worry: they're pretty straightforward. The tunes are never more than six notes long, and even then you're given at least half of them, only having to fill in a few blanks. The inventory puzzles, too, are fair and logical, if not particularly challenging. However, all that good work comes somewhat undone when, late in the game, you arrive at a hedge maze.

What our readers think of The Song of Seven: Chapter 1: Overture