There is something very important about 1979 Revolution: Black Friday. The Iranian struggle for independence is a topic many of us, myself included, likely know very little about, if anything. It doesn’t fit neatly with our western-centric way of thinking about the world. A realistic account of it is hard to find in any medium, let alone in games. For this reason, and for the cinematic style in which it’s presented, developer INK Stories’ debut effort deserves applause. However, its significance is somewhat undermined by the fact that there is very little for players to actually do, and it’s difficult for outsiders to grasp the cultural complexity involved in this fairly abbreviated experience.

The game explores the months leading up to the fateful Black Friday through the eyes of Reza Shirazi, an enthusiastic hobby photographer who has just returned to Iran from the United States. Reza arrives back amid a significant uprising of the country’s people against the ruling monarchy. Through his childhood friend Babak, Reza is introduced to an underground revolutionary movement, one he is initially not sure he wants to be a part of. As the story progresses, he finds himself pulled into a web of choices and consequences as the revolution’s leaders split over the issue of using violence to achieve their means. The events even pit brother against brother, as Reza’s own sibling Hossein, working as a police officer for the ruling Shah, learns of his associations with the illegal underground movement.

You’ll quickly learn that the game is actually a flashback, recounted by Reza during questioning at the notorious Evin prison. Pressured to confess and reveal the identities of the rebel leaders, Reza provides an account of important moments of the revolution, which comprise the game proper. This approach to storytelling works for a historically accurate game; the goal is never to influence the final outcome of what really happened, but to experience events more personally as they occur. 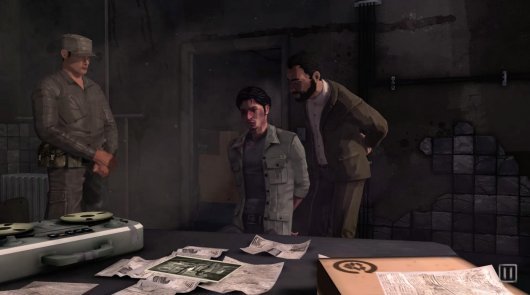 1979 Revolution is certainly a highly cinematic experience. Though its 3D graphics aren’t much more than adequate – character models are last-gen and the color palette rarely goes beyond faded light browns and ochres for outdoor scenes, with darker browns and reds pervading indoor sets – they get the job done, with smooth animation and enough attention paid to little touches like fashion, vehicles, and décor that fit the late-seventies setting.

The developers do, however, know their craft when it comes to staging action set pieces with dramatic music and camera angles. Scenarios run the gamut from peaceful protests to armed altercations, both of which Reza becomes directly involved in. In one scene, he has to make his way to a wounded comrade, using cars as cover to dodge gunfire as police are firing on the throng of protesters. Reza’s prison interrogation sequences are equally tense, forcing you to make split-second dialog choices while listening to the sounds of Reza’s brother being tortured just a few feet away. One of the catalysts that brought events to a head – a local theater burned down in an act of arson that claimed the lives of 377 citizens – takes place just prior to the game’s beginning; it’s not explicitly shown, but sets the tone for the people’s emotional state.

The voice-over cast is similarly impressive. It is refreshing that pains were taken to hire actual actors of Iranian descent, and it really shows in the dialog’s authenticity. Likewise the writing lives up to this high standard, with events based on director Navid Khonsari’s actual childhood experiences in Iran at the time. For the game’s brief duration – I completed it in just over two hours – it opens a window to a genuine, realistic slice of world history, and this earns the game its lion’s share of praise. 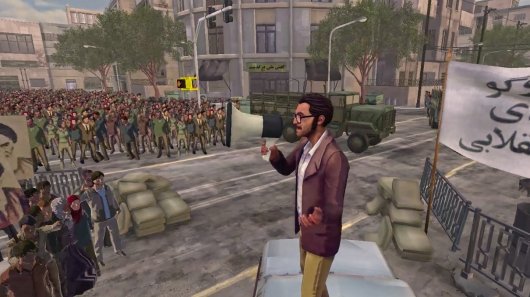 Less splendid is the execution of the actual gameplay. 1979 Revolution is more of a documentary, the occasional bits of gameplay largely focused around unlocking little pieces of historical minutiae by examining its environments. Sprinkled in here and there are the aforementioned set pieces and dialog scenes, which provide more to do while they last but will not be enough to immerse those looking for a more hands-on experience overall. One could easily make a comparison to any of Telltale’s recent episodic story games, as they certainly seem to be a major source of inspiration.

Player interaction is divided into three equally unsatisfying categories. When you’re actually in control, it’s usually to either walk around an area to examine collectible objects that unlock the game’s accompanying historical trivia (more on that later), or to walk through a crowd or down a street taking photographs of events as you go. Neither is very exciting, and the photography segments simply require you to aim until the viewfinder turns green, wait for the focus slider to reach the middle of the screen, and hit the trigger. I wasn’t very skilled at getting it just right, but the game gives credit for “close enough”.

The remainder of the gameplay consists of dialog sequences where you must choose from two to four preset responses to keep a conversation going, and Quick Time Events during the sporadic action scenes. These bits work well for what they are, though I found it a little frustrating when I had to respond to conversation topics that I lacked the proper cultural context for. The control combination of keyboard for movement and mouse for interaction works fine, and players who thoroughly enjoy this type of minimalist approach to gameplay won’t find many issues here, but it does leave a lot to be desired for those who want to be a more integral part of the experience. 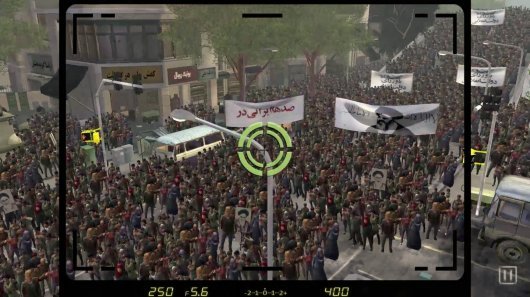 In some games, having player-controlled QTEs and key conversational options can lead to a branching, multi-faceted storyline. The narrative in 1979 remains pretty linear, however, outside of some altered dialog. Inputting a wrong response during the action sequences will kick you back to a previous point in the sequence to do it again, as it usually results in death. The only time I noticed a choice I’d made have an impact was when I had to collect clues and decide which one of four people in the underground resistance was an informant (the game’s only real “puzzle”). But this section was poorly done: though I gathered all the clues I could, I still had no idea who the culprit actually was. Worse yet, when given the list of characters to choose from, I realized I didn’t know who any of them were. I had no connection to any of them, and so it didn’t bother me that I had to pick one at random. There is a consequence to this decision, but it made no tangible difference since they were only four interchangeable names.

This leads me to my final point, and it is perhaps one that can make or break a game relying on historical fact and set in an exotic culture: certain events that occurred, from major political turning points to simple conversations over the family dinner table, became frustrating when a casual comment or ideological discussion went over my head due to a lack of proper context. The developers have taken some steps to acclimate players to the setting by offering short vignettes as rewards for careful examination of the environment. But these fail to go deep enough to help you catch the narrative’s full impact, and some players may never unlock them. Reading a paragraph or two on the Ayatollah Khomeini is far from sufficient to fully clue someone in.

This is where the game’s otherwise noteworthy concept falls down. A revolution isn’t born overnight, its causes rooted in deep-seated, long-term mistreatment. Any game, much less one that lasts only two hours, would struggle to provide enough background to immerse players in the full extent of the crisis. Without that grounding, it’s difficult to establish an emotional connection to Reza and his experience of events. The game’s nineteen chapters don’t sound so impressive when each one on average lasts only five or six minutes, typically just enough for a single scene to play out. The ending also doesn’t tie things up neatly; based on your actions, one of two possible endings will trigger, neither really bringing the story to its logical conclusion but leaving the door open for more. 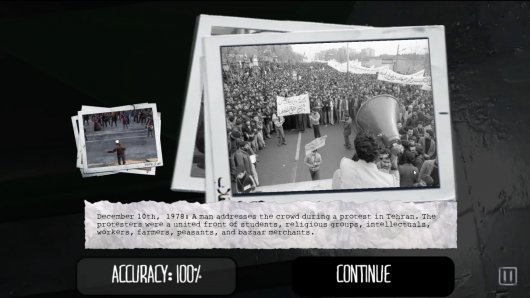 Throughout the game, you do have the option to voice agreement for the pacifist resistance or the more aggressive protestors, allowing you to direct the dialog in whichever way best matches your own beliefs. It’s not just the resistance that walks the line between two extremes, either: one memorable scene sees Reza, Babak, and Hossein sitting at the dinner table with Reza’s parents, with tension so thick you could cut it with a knife. The game’s ultimate message is still about the “corrupt and evil ruling regime”, but there are a few ambiguous shades of gray in there for good measure.

I love the idea of 1979 Revolution: Black Friday – on paper. A game that lets you learn about and experience an event this instrumental in shaping a nation’s identity is one that should, by all accounts, be lauded. Add to that the attention to detail and authenticity shown by the designers and you’ve got a recipe for success. But the actual execution certainly won’t be for everyone. Next-to-no real player agency, only one quasi-puzzle sequence, and surprising brevity for such a deep subject prevent the experience from being more impressive. In the end, it feels like an interesting, if too short and overly passive appetizer that only makes me hungrier for the main course to be served.

1979 Revolution is one of those rare games that has aims and aspirations beyond simply “being fun”. Despite its legitimate historical importance, its brevity and limited gameplay make it feel more like part of a historical anthology rather than a complete experience on its own.

GAME INFO 1979 Revolution: Black Friday is an adventure game by iNK Stories released in 2016 for Android, iPad, iPhone, Linux, Mac, PC, PlayStation 4, Switch and Xbox One. It has a Stylized art style, presented in Realtime 3D and is played in a First-Person perspective. You can download 1979 Revolution: Black Friday from: We get a small commission from any game you buy through these links.
The Good:
The Bad:
The Good:
The Bad:

What our readers think of 1979 Revolution: Black Friday

Short interactive story based on true events about the 1979 revolution in Iran. While playing you gather a lot of knowledge about this revolution and you have to make a lot of choices that doesn't... Read the review »