Legend speaks of an ancient time when Kentucky Route Zero Act: III was released, and prophecy foretells of a distant future in which the game will be complete in its full five-part glory. Perhaps with rapid advances in modern medicine, I will live long enough to see that fateful day.

Yes, Kentucky Route Zero is taking its sweet, sweet time getting to the finish line. The debut act was released in January 2013. Three-and-a-half years later (including two years since the previous installment), developer Cardboard Computer has finally released Act IV with minimal fanfare and almost no warning.

As frustrating as the wait has been, there is something appropriate about Kentucky Route Zero, of all series, refusing to be hurried. This is a game that features achingly slow, subtle camera movements; that encourages introspection with long musical interludes; and that meanders in a thousand different directions. It’s a game that’s about many things but primarily revolves around a group of people in no particular rush to get to their destination, if they even have one. Conway wants to make his final delivery, Shannon wants to find her sister, Ezra wants to go home… eventually. In the meantime, what’s the harm in taking a few detours to take in the sights and chat up the locals of the mysterious Route 0? We’ll get to Act V eventually. What’s the rush? 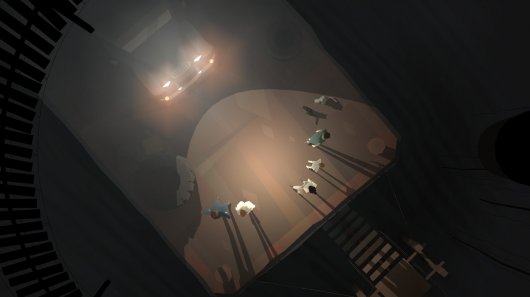 As Act IV starts, we find our intrepid wanderers aboard a tugboat called The Mucky Mammoth (on account of the massive animatronic beast that dominates the front of the ship as something of a figurehead). Conway’s not doing great – he’s still en route to his final delivery at the elusive Dogwood Drive, but along the way he’s been suckered into lifelong debt working for a whiskey company staffed by glowing skeletons. Shannon, Ezra, Johnny and Junebug are along for the ride, as well as the crew of the Mammoth.

Even by Kentucky Route Zero’s standards, Act IV is light on plot, essentially just recounting the slow, meandering journey of the ship across the subterranean river Echo. Like much of the underground, the river is populated with a motley assortment of outcasts and loners at unique stops, each with their own little slice of surreal Americana: a floating gas station, a diner that serves deep sea delicacies, a flooded tunnel with the last remaining phone operator working alone.

As the crew makes their way down the river, you’ll pick up little snippets of backstory through conversation and internal musings, told in KRZ’s typically obtuse, poetic manner. Everyone has a story, the game seems to be saying. Everyone. 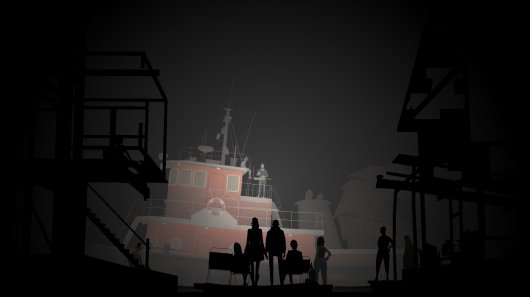 It may be my imagination, but it does feel like Act IV is more linear and less interactive than previous episodes. Its predecessors often gave at least an inkling of player agency, allowing characters to move from location to location, but Act IV, tied to the flow of the river, only allows you a few binary choices between who to follow when the party splits up. This means that you miss out on the alternatives, but none of them are strictly necessary or change the story, so it’s up to you if it’s worth replaying to go back and see the other scenes.

Of course, as with previous episodes, there’s really nothing remotely approaching a puzzle, with the gameplay mostly consisting of looking at things and talking to people with no real obstacles to overcome. A few scenes restrict the player to progressing the dialogue and watching events unfold, taking away even the ability to walk around and examine the environment. In many games that would be a strike, but this isn’t many games.

If there is one issue with the series at this point, it’s that over the course of three years its schtick has become a little familiar. It’s still fantastically well done, but it can feel almost… predictably quirky at times. In the same way that everyone has a story, everyone also has some wacky magical realist twist on their backstory. There are moments that surprise, like a scene that takes place entirely within security camera footage, and the clever reveal of the episode’s biggest narrative development. But the rest is the way it’s been all along, and it’s lost a little of its charm, if only because we’ve been there and done that. 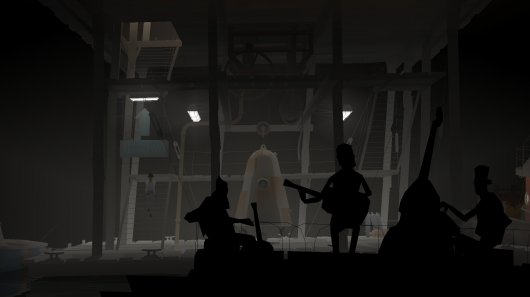 Act IV retains the game’s signature visual brilliance, and it seems that Cardboard Computer is getting more and more comfortable with pushing their subdued vector art into creating complex architecture and then exploring it with subtle camera movements. And small, gentle effects like the lapping of waves and the beam of a flashlight in the dark add that welcome, extra layer of visual polish. The game looks as good as ever, if not better.

It sounds good too. Kentucky Route Zero has always used sound sparingly, and Act IV is no different. Mostly you’ll just get some abstract droning noise and background ambience, but like the theater productions that inspired the game, less is often more. A major scene in the game takes place during a solo theremin concert, with the eerie wails of the instrument reverberating throughout the cave. The sense of being in a remote, lonely cavern full of echoes and shadows is remarkable.

If you’ve come to Act IV hoping for Kentucky Route Zero to dive further into the mysteries and drama that it (very) occasionally hints at, you won’t find it here. This penultimate episode is slight, running less than two hours in a single playthrough (though more if you replay for alternate scenes). Even at this stage, it remains a meandering, eccentric wanderer of a game, much like its cast of characters. But oh, what beautiful wandering it is.

GAME INFO Kentucky Route Zero: Act IV is an adventure game by Cardboard Computer released in 2016 for Linux, Mac, PC, PlayStation 4, Switch and Xbox One. It has a Stylized art style, presented in 2D or 2.5D and is played in a Third-Person perspective. You can download Kentucky Route Zero: Act IV from: We get a small commission from any game you buy through these links.
The Good:
The Bad:
The Good:
The Bad:

What our readers think of Kentucky Route Zero: Act IV