Review for Jack Keane 2: The Fire Within

We get a small commission from any books sold.
Written by
Astrid Beulink — July 12, 2013

Back in 2007 I rather enjoyed the original Jack Keane, so I was eager to dive headlong into another exciting and funny adventure of Jack and Amanda in The Fire Within, though my enthusiasm was tempered somewhat. Having already played a couple of scenes of the German version for preview, I was more or less prepared for the controversial new interface. And indeed, although the new game offers plenty of action-packed adventure done the right way and (re-)introduces a mouse-based control scheme in the English release, the sequel still feels cumbersome and clumsy, and the frustrating search for objects interferes with the flow of the story.

At the start of the game, you are dropped right in the thick of the action, with Amanda on a ship near the Shanghai jail where Jack is being held prisoner. The crew she hired to bring her here threaten to kill her because she hasn't paid them yet, but the fearless Amanda manages to defeat them before the scene switches to Jack's viewpoint. He is about to learn some secrets from a shaman cellmate, including the whereabouts of a great treasure. Unfortunately, just when the shaman is ready to share a consciousness with Jack, the old man dies and Jack is left none the wiser. He does have one part of an amulet but no other clues. Plus he's still locked up and about to be thrown into a pit to fight against the unbeaten Skullcracker. In order to win the fight, Jack must learn some martial arts tricks from the inmates on Death Row, providing Jack does them some favours first. Eventually Jack does prove victorious but is knocked out in the process, and travelling into his own subconsciousness he discovers the shaman did leave some clues behind after all. His first task is to journey to find all the pieces of the amulet, one of which should be in Hamburg, so that's where they're headed next.

The adventure ultimately takes them to several places along the river Nile, ending at Mount Kilimanjaro, with a few excursions into Jack's subconscious along the way. Jack and Amanda don't have to make the entire journey on their own, however, as they are joined by a photographer named Eve and Karl the engineer in Germany. In twos and threes they travel in Karl's invention – a horseless carriage – and later all four end up in an airship. Unfortunately for the foursome, Professor Umbati is hot on their trail, wanting the treasure for himself, and he and his henchmen do their best to sabotage them at every location they visit, which introduces the majority of the puzzles. Most of the tasks involve searching for and combining objects to overcome obstacles such as lifting a car without a jack and mixing ingredients for a medicinal cure. A few involve long strings of quite illogical steps performed in a particular order, and although it is usually more or less clear what you need to achieve, the way to do it can be very obtuse, which tends to stall any momentum in the game. A lack of clues and feedback means you can be stumbling around for a quite while until you can progress. 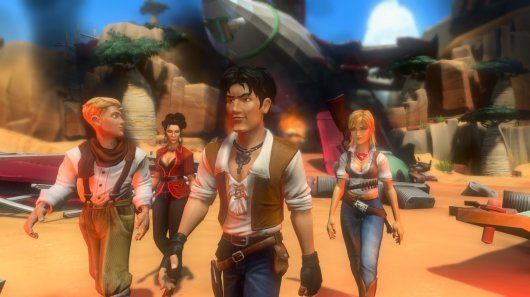 Other puzzles require navigating dialogue trees. For instance, you will need to convince Amanda to stand in a specific place so you can save her by choosing a series of correct options. If you choose the wrong line at some point, she will not come forward and you'll need to start over. Another puzzle is obviously inspired by Monkey Island's insult swordfighting. Taking turns, Jack and his enemy choose an attack and a defense. The enemies have a 'tell' that indicates what move they will be using so you can choose the appropriate defense, if you know it. If you don't, you will need to find someone who does and is willing to teach it to you. These sequences are timed, but there are never more than five moves to choose from and even if you don't pick the correct one in time you can always initiate another round of fighting until you get it right. As you don't know which defenses your opponent knows, you will have to experiment with Jack's attack moves a bit before you can win, but since there are only a handful of these fights that isn't too much of a problem.

You play as Jack for most of the game, but there are a few scenes where you take control of Amanda or Eve, and some puzzles depend on two or three people working together, with an on-screen icon letting you switch between them freely. At several points, the story branches based on which character you choose. You can, for example, ask either Eve or Amanda to make an impression on someone, and based on that choice the scene that follows plays out a little differently. The game saves automatically in a new slot at each of these branching points, so you can easily go back to replay the scene with the other choice. Your choices also affect Jack's relationship with the girls, which eventually leads to a different ending, but during the game you don't notice much difference in the way they treat Jack or each other. The ladies respond to each other as if they are archenemies whether you blatantly favour one over the other or distribute the tasks evenly between them. The juxtaposition between the cowgirl Amanda and the city girl Eve is a major source of the humour in the game, though, and the tension between Jack, Amanda, Karl and Eve is well-crafted.

Through a number of cleverly constructed dynamic scenes in which you are usually on board a moving vehicle, the game adds some welcome “action” to the story. But there is never any need for quick reflexes, as you can take your time figuring out what to do. In one scenario at the start of the game, when Amanda is on the boat, she has the opportunity to hide behind some crates either to the left or the right of the mast, but she cannot leave that particular spot. From each vantage point, she can use her gun on different targets, and choosing the wrong target will result in the bad guys shooting back. She will never get hit, though, and her bullets never run out, so it's just a way of telling you to try something else. These sequences are great at creating the illusion of grand-scale action going on around you while still maintaining the series' pure adventure game sensibilities. 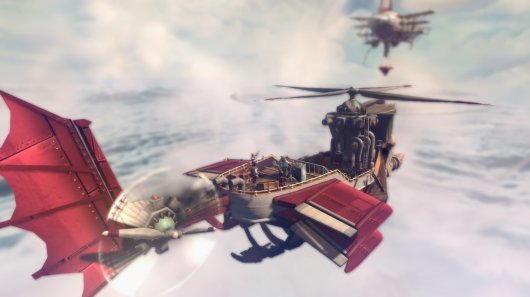 As with its predecessor, Jack Keane 2 is controlled from a third-person view, but this time there is a choice in how to move the protagonist around. One method is click-and-drag, pointing the mouse cursor to where you want Jack to go and letting go of the button only when he has arrived. Making him walk around a corner to view the room from a different angle or into a room at the 'back' of the screen is often a problem, as is jumping onto platforms, crates or rocks, which is done by clicking the right mouse button. While these actions are not timed in any way, the controls are very clumsy and imprecise, and getting Jack in the correct place is often a challenge. He will sometimes fall off and other times fail to jump high enough or at the correct angle, and it's not always clear if the ledge you are trying to reach is actually part of the intended path, especially if the jumping takes place in a relatively distant corner. This limitation, combined with the fact that the camera is fixed, makes even collecting objects harder than it should be, because some items are not interactive if you are not facing the correct direction or standing on the correct level.

Alternatively, you can choose to use the keyboard (WASD and the spacebar) to move around instead. There is even a 'Jump' button on the screen you can use, so you have a wide variety of interface options, but all of them suffer from the same camera and pathfinding problems. There is a hotspot indicator, but that only shows objects that are in your current camera view, and it doesn't reveal exits or items you can only look at from your present position, even if they become interactive once you've moved to their level.

The game looks good once again, with beautiful and colourful, lively 3D backgrounds and lots of detail even in prison cells and caves. There is also a great diversity in character models, from Asian guards to African tribesmen and even a couple of monkeys and elephants. Facial animations are less impressive, being much less detailed and sometimes having incorrect lighting and shadow effects. Jack has a new voice actor, being British this time, sounding a bit like Eric Idle but with less humour and less emotion and not really getting into his role. Amanda is once again voiced by Lani Minella, which is a bit of a distraction if you've played any Nancy Drew or Runaway games. There are a number of 'that's not possible' responses that keep being repeated, which tends to get a bit unnerving if you hear them too many times, and it's not possible to skip dialogues if you happen to click someone again to see if they have something new to say and they don't. There are a few funny moments, but overall the lighthearted humour didn't make me smile more than a few times.

Jack Keane 2 tries hard to rejuvenate its predecessor's point-and-click formula with a new interface and well-designed dynamic sequences, but its clunky implementation resulted in my having less fun than I did with the original. The sequel is a lot shorter than the (admittedly very lengthy) first game too, with not nearly as many locations to visit, which is a pity since they're so nice to look at they're well worth exploring. If you are really interested in learning what happens to Jack and Amanda on their latest adventure, you can do so in less than ten hours of part-fun, part-frustration, but if you couldn't care less about them after the first game, there's nothing in The Fire Within to rekindle your interest.

WHERE CAN I DOWNLOAD Jack Keane 2: The Fire Within

Jack Keane 2: The Fire Within is available at:

Jack Keane 2 is a fun action-packed journey at times, made far more frustrating than it needed to be due to its clumsy interface and obtuse, pace-killing puzzles.

GAME INFO Jack Keane 2: The Fire Within is an adventure game by Deck13 released in 2013 for PC. It has a Stylized art style, presented in Realtime 3D and is played in a Third-Person perspective.