It is the year 2153, and the galactic transports of the future are the mighty behemoths known as Astro Locomotives. Life is tough in the space train industry, with inter-company fighting and pirates taking their toll. For one company, based on Gilbert Station, some inadvisable financial decisions have left them on the brink of ruin. When Dirk McScoundrel, CEO of rival Badger Railroads, drops in to gloat, he leaves behind a piece of paper that could provide the answer. A lucrative new route is there for the taking, if the minor inconvenience of a planet in the way can be dealt with. Of course, things are never that simple, as the crew of Gilbert Station soon find out that this new route may not be all it seems. The resulting adventure in Astroloco: Worst Contact proves to be a surreally hilarious retro romp, though one that may prove too simple for those seeking a challenge.

Starting off controlling station maintenance engineer Ronald, you are run through a brief tutorial guided by a sarcastic narrator. This is handled in a surprisingly immersive way, the narrator describing Ronald suddenly remembering how to use the different parts of the interface, which makes it feel like part of the game world. The actual mechanics will all be very familiar to experienced adventure gamers, however. Left-clicking examines hotspots while right-clicking interacts with them. Ronald has a tool belt, called up by moving the cursor to the bottom of the screen, which holds some basic implements and his pager. Other than these few items, carried with him at all times, there is no accessible inventory, as the game simply notes when you have picked any other items up, which are then used automatically when you click on an appropriate hotspot.

After dealing with a technical “emergency” involving the station boss’s videogame console, the fateful piece of paper is dropped and the story proper starts. Switching to gung-ho train driver Arianne Beckett, your attempts to exploit the new route trigger an alien invasion that Gilbert Station is ill-prepared for. For the rest of the game you switch between Ronald’s preparations for alien attack and Arianne’s quest to return to the station and then rescue the boss when he is kidnapped by pirates. For parts of the game you can switch between the two characters, though there is no player-controlled interaction between them. 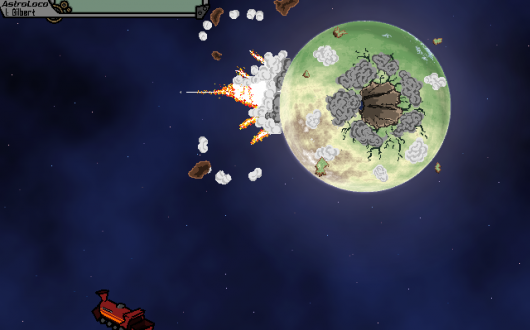 The graphics largely retain the early '90s pixel art style of the developer's previous freeware games, subAtomic and Plan M, which conveniently come bundled with Astroloco at participating digital distributors. The backgrounds are reasonably detailed in a brightly coloured cartoon style, including the station’s security room filled with blinking consoles and a pirate ship lit by skull-shaped lamps. These backdrops also include good animations, such as a sweeping rainbow trail left behind when an Astro Locomotive kicks into hyper-drive.

By contrast, the character art has a more profoundly retro low-res look, with blocky characters having single large pixels for eyes. Despite this lack of nuance, each character has a distinct personality of its own, with sufficient artistic detail to distinguish a pirate outfit from the villainous top hat and twirling moustache of Dirk McScoundrel. The real joy of the characters comes in the animations, from the bobbing talking heads and wildly exaggerated walking motions to simple idle gestures like the nerdy station boss, Mr. Burrows, polishing his glasses. This approach makes the deliberately antiquated look part of the game’s humour, even including a fourth wall-breaking situation where someone fails to recognise another character because their face is “awfully low-resolution”.

The sound is also well produced. The musical soundtrack is a varied one, with dramatic station music contrasting the banjo-style music on a remote planet with a single old man running a fuel station. The soundtrack also includes some appropriate musical flourishes, such as dramatic chords that sound when you first enter the dreaded "Outhouse of Horrors". The most pleasant surprise on the audio front for such a relatively low-budget production is the quality of the voice work. The voices cover a wide range of characters whose performances are delivered with great gusto. The narrator presents even relatively mundane text in a wildly over-the-top manner, while Mr. Burrows has a wonderfully nasal voice as he defends his train collection by claiming, “They’re not toys. They’re collectibles.” Even relatively minor parts such as a belligerent chef and Ralph, an on-board train computer, have their own distinct personalities. These performances nicely serve to bring the characters to life, immersing you in the surreal world they inhabit. 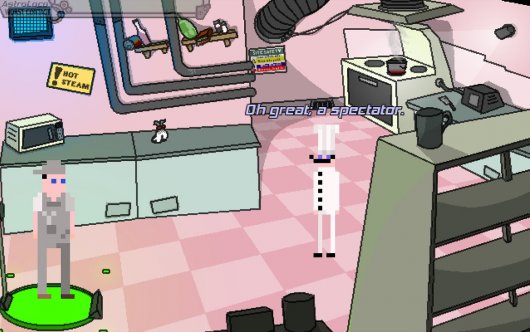 But where this game really shines is in the sense of humour that permeates the entire story. This starts right from the settings menu, where the Developer’s Commentary feature is accompanied by a Sociopolitical Commentary option (which is on by default and can only be turned up). Once in the game proper you will encounter overly enthusiastic guards exaggerating their duties at a minor security station as “defending freedom” and a pirate captain inordinately pleased with having looted some spinning office chairs. Attempting to fix a technical error results in meaningless technobabble that would make Star Trek proud, whilst fixing a particle accelerator involves picking up the surprisingly large particle from the floor. There are also several satirical digs at real world situations, such as the positioning of gun emplacements in the housing area, mirroring events during the London Olympics.

The various characters play a big part in the atmosphere, with a store manager constantly spouting health and safety warnings and the somewhat dumb black marketeer Shady Jim being too willing to trade a useful device without checking what you are offering in exchange. There are also numerous gaming in-jokes, including a crate resembling a certain companion cube and a puzzle echoing the manual-based copy protection systems of early computer games. The developers’ avowed maxim that a minute without a joke is wasted really lives up to its promise with a consistently high quality that had me laughing out loud on occasion. 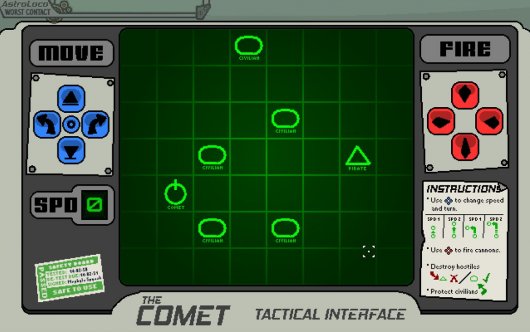 Given the highly streamlined interface, there is not much here that will delay the experienced adventurer for long. An early puzzle involving a turn-based minigame to fight off some pirates may prove slightly tricky, though losing most of the ships you're meant to protect does not seem to be a problem. Other than that, for the most part the puzzles are fairly simple to solve. Getting the right item out of storage simply requires memorising (or writing down) a short code. Like Ronald, Arianne only has a utility belt, though hers holds a gun, and the automatic inventory handles all other uses of collected objects. This results in a couple of occasions where I solved a problem entirely by accident, simply because I had an appropriate item in my possession already. In another case I managed to solve a problem before I even knew the problem existed. This does ensure that the game flows smoothly and there are occasions where simply messing about, such as knowingly using incorrect codes in the stores, can add to the fun. This is not a game that is going to stretch your brain cells a great deal, however.

Even with its relative ease, I found Astroloco: Worst Contact a great experience overall, as the non-stop humour more than made up for the lack of challenge. From the voice work to the whimsical low-res character animations, the whole game feels like it was made by gaming enthusiasts who wanted to make a game they would find fun to play. At only 4-5 hours of play time it might end a little sooner than other titles, but it's budget priced accordingly and its shorter duration is packed to the gills with comedy. Add to that a developer’s commentary, giving you insight into the mad minds behind the game, and an achievements system for those looking for more to do, and it all adds up to a very entertaining package. If you are only interested in testing your brain, this definitely won't be the game for you, but anyone up for a laugh should find this an adventure to go loco over.

Astroloco is a short but hilarious sci-fi comic adventure that will strain your sides if not your brain.

GAME INFO Astroloco: Worst Contact is an adventure game by Hungry Planet Games released in 2013 for PC. It has a Stylized art style, presented in 2D or 2.5D and is played in a Third-Person perspective.