During the late '80s and early '90s there were some renowned fantasy adventures released, such as Simon the Sorcerer, Discworld, and of course the King’s Quest franchise. These series became popular staples of the genre, but their success tended to overshadow the less successful ones. One such game was 1994's Dragonsphere, the last MicroProse adventure developed using their own MADS (MicroProse Adventure Development System) engine, which managed to pass relatively unnoticed. That's a pity, since the magical journey through this stylish, detailed world should satisfy any fantasy fan's imagination until the end. Fortunately, its re-release as legal freeware in 2011 has provided a new opportunity to give the game the attention it deserves.

In Dragonsphere, you take on the role of Callash, king of Gran Callahach, who must defeat the evil wizard Sanwe before he breaks free from the waning magical imprisonment that your late father cast over his tower 20 years ago. The strength of the spell is represented by an Orb in your possession called – you guessed it – the Dragonsphere, which began slowly cracking a few days prior to the start of your quest. A terrible sign.

The day after your coronation, against your wife's and mother’s wishes, Callash resolves that it’s better to face Sanwe within his magical barrier before all hell breaks loose along with him. Aware that he’s not going to be an easy opponent, before you confront him you must collect a series of magical orbs scattered through three regions: the faerieland of Brynn-Fann,  the twisted woods of Slathan ni Patan and the desert of Soptus Ecliptus. 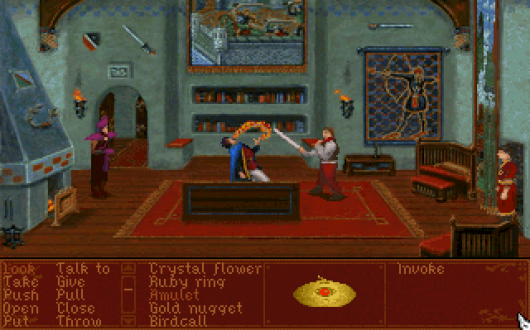 The King's journey will overturn some of his preconceptions and beliefs, such as the untrustworthy nature of some of his followers, but more importantly will also reveal hidden truths about his world and his own past. Even with all these discoveries to reveal, however, the quest to acquire the spheres needed to defeat Sanwe is fairly short, as you’ll rarely need to visit the same location more than twice. Orb collection makes up the bulk of the adventure, adding up to a total duration of 5-6 hours.

Despite its brevity, the sights in this fleeting quest are worth the effort. Gran Callahach is rich in lore and detail; almost everything within the environment can be an interactive hotspot, and although they don’t always have a practical purpose, the descriptions contribute greatly to the immersive setting. From the banner over your throne to the living trees in an eerie forest, countless hotspots provide lengthy text descriptions revealing some insight into Callash’s thoughts. This sets the epic, serious tone that predominates throughout the adventure.

The kingdom's strange territories are very imaginative, populated with unique races with fascinating tongues. The pale men of Soptus Ecliptus speak an intricate language where the meaning of words changes depending on the number of times certain prefixes are used before them; the fairies of Brynn speak in rhyme to test the patience of humans, whom they call fairs (finding "human" to be a silly word), and it is said that the poor inhabitants of Slathan possess the ability of  shapeshifting. 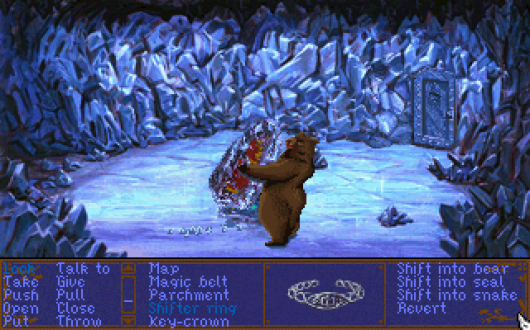 Unfortunately, Dragonsphere’s characters are far less interesting. By relying too much on stereotypes and clichés, MicroProse have fallen just short of creating a truly engrossing world. The jealous brother who wants to usurp the throne and the two-dimensional evil wizard are just too unoriginal and boring, their dialogue predictable and commonplace. Very little effort has been made to delve into the supporting characters’ backgrounds, and the script is sometimes too concerned with moving the action forward. This becomes increasingly evident as you meet more and more characters who just happen to be waiting for Callash and, except for a couple of obnoxious guards, have exactly what he needs.

The sub-par voice acting doesn’t help either. Most of the female cast are terribly plain, while Callash himself is the dullest of their male counterparts, delivering line after line without emotion and making it difficult to connect with his commitment to his father and the welfare of his loyal subjects. After a few hours of play, however, this is easily overlooked, particularly due to an unexpected plot twist that remains surprisingly effective even after all these years.

The point-and-click interface works in a similar vein to MicroProse’s previous adventure games, such as Rex Nebular and Return of the Phantom. Much like SCUMM, you conduct actions by picking verbs from a list and using them either with items in your inventory or in the surrounding environment. Some inventory combination is required, but these occurrences are few and far between. 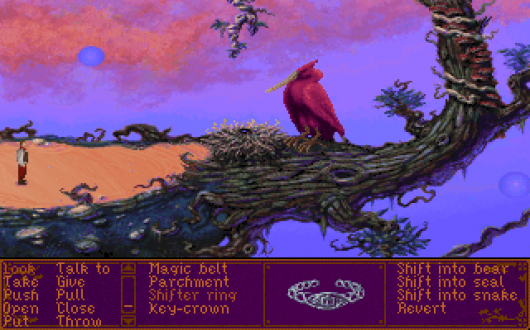 More common are puzzles and riddles which require you to recall information you’ve been told by other characters to figure out a solution. For example, there’s a crucial moment that you must use a particular phrase to assist a character. Remembering some lines of a seemingly unimportant book of poems that’s laying around your castle proves useful for this task. They're not always straightforward, which makes for some very satisfying gameplay, though the puzzles shouldn’t prove too difficult for attentive gamers.

There are also a couple of entertaining minigames that you must complete once but can optionally be replayed, like the gambling game you play with a Caliph where you have to guess the next gemstone that’ll come out of his jewel bag, accumulating a certain number of points depending on the stone that pops out.

On the downside, the game is guilty of prohibiting players from trying some of the more sensible methods of resolving puzzles, with little indication or guidance as to what the designer had in mind. At one point you must freeze a rather unintuitive item to accomplish a goal when clearly it could’ve been done by freezing any other object in your inventory. Such issues are not terribly annoying, but they can lead to some frustrating moments. There’s a degree of pixel hunting too, and since the color palette is often fairly dark, some objects tend to blend in with their surroundings. Some of the puzzles benefit from Dragonsphere’s graphics, however. In a faerieland maze you’ll find light spirits that constantly change color, and interaction with them is different depending on the color they are at the very moment you approach them. 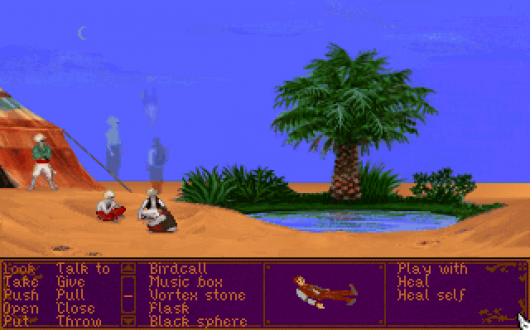 Even with its rather muted color scheme, this is probably one of the best looking 256-color pixel art adventures I’ve played. Object illustrations are meticulous, and the landscapes are endowed with personality in a realistic, dark style that makes for some very atmospheric places. Many times the game uses unconventional camera perspectives to make the scenes more compelling. As part of MADS, MicroProse used a special video imaging processing system that allowed them to rotoscope and digitize actual actors filmed for the game, a technique similar to the one used in Another World and Flashback, resulting in beautiful and fluid animations. It’s still amazing the amount of realism the movements afford to such small sprites with so few pixels.

Enraptured by the cinematic cutscenes, like the one where Callash and his father vanish into the horizon atop strange silhouetted beasts, you can't help but feel that you’re bearing witness to an overlooked piece of art. You'll wonder what these creatures are and what kind of noises they'd make as Michael Bross’s (Oddworld, Ratchet & Clank) fantastic soundtrack plays in the background. That the music is so good and so appropriate to its magical fantasy setting is of great importance, since the sound effects are scarce and barely get the job done.

It’s clear a lot of care was put into the development of Dragonsphere. Despite its short length and clichéd characters, its puzzles are entertaining and exploring instils a powerful thirst for more insight into this wonderful world and its thoroughly detailed lore. It never really got the notice it deserved at the time, and it’s a real shame MicroProse decided to close its adventure line after this game. But at least it's available now as legal freeware, and at that price it more than warrants any adventure gamer’s attention nearly twenty years later.

Dragonsphere is a short but fairly sweet fantasy quest that redeems its two-dimensional characters with enjoyable gameplay, an intriguing setting and a memorable second act – and it’s now free!

GAME INFO Dragonsphere is an adventure game by MicroProse released in 1994 for PC. It has a Stylized art style, presented in 2D or 2.5D and is played in a Third-Person perspective. You can download Dragonsphere from: We get a small commission from any game you buy through these links.
The Good:
The Bad:
The Good:
The Bad:

What our readers think of Dragonsphere