We get a small commission from any books sold.
All Bitmap Books
Written by
Astrid Beulink — April 16, 2013

Red Johnson is a ginger-haired, laid-back private detective living in a corrupt city called Metropolis, where crime reigns supreme and police would rather blame an innocent bystander than actually investigate a case. If that sounds familiar, you've probably heard of Red Johnson's Chronicles or its sequel, One Against All. The largely unknown Metropolis Crimes actually came before both, but was distributed only in limited markets worldwide. This Nintendo DS game shares some of the same good points of its successors, such as attractive graphics and challenging puzzles, but unfortunately most of the bad ones as well. And along with the weak storyline and flat characters, the handheld game suffers from unresponsive and inaccurate controls as well, which make it a frustrating experience at times.

If you're not familiar with the series, Lexis Numérique has a reputation for creating games that are a bit different, and Metropolis Crimes is no exception. It consists of four cases that introduce Red and his methods of approaching cases. In the first, he stumbles onto a crime scene at the photo studio of an old friend. The two people outside blame each other, and when Red finds out there is money missing from the cash register he decides to investigate. The second one deals with a break-in at an old theatre leading to the death of one of the perpetrators, while in the third Red himself is framed for murder when asked to enter a fortune teller's trailer. The final case begins with the body of an elderly woman found inside a washing machine in the cellar of her own house. Each investigation follows the same basic structure, consisting of several phases involving taking witness statements, discovering and analyzing clues, interrogating suspects and deducing what went down.

Each stage is self-contained and upon completion is evaluated with a letter grade that adds points to a total case score (depicted as a needle gradually moving up on a dial). How well you do influences the rating you get at the end of the case, along with the number of puzzles or minigames you have to complete (do well in the first two rounds of an interrogation and you're done; miss out on one and you can still 'win' by doing a third round). Whenever you finish a phase, the game autosaves. You can't save manually, which means if you blow a puzzle or dialogue and want to retry, you'll need to replay the entire stage (potentially repeating a dozen puzzles or a handful of interviews in the process). Two or three times you will visit Red's hideout, where he has a computer, a scanner and some other hardware where you can analyse clues CSI-style. 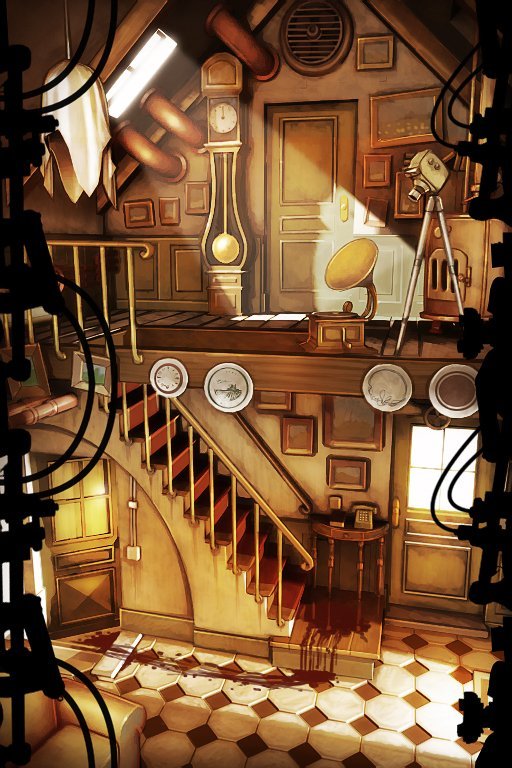 In any given scene the interface requires you to use the touch screen in many ways. To find out where interaction is possible, you draw a circle (symbolizing a magnifying glass) and move that across the screen until it turns into a jigsaw puzzle piece (a puzzle) or a door (exit to a different location), which you can then touch to access. To open your notebook with clues, statements and a description of people you've met so far, you must draw three sides of a rectangle at the bottom of the screen (the bottom itself being the fourth side). Witnesses can be interviewed by drawing a question mark over them (using the shoulder buttons to switch between them), while choosing the correct answer in one of the many quizzes requires you to duplicate a symbol associated with the corresponding sentence on screen. A couple of times you need to blow into the microphone to remove dust or spread it around to cover fingerprints.

Finding and analysing clues is often a matter of figuring out what the game wants from you. All you get is an object that you use the stylus to interact with, such as unscrewing caps, turning dials, pushing buttons and peeling off labels, or you can switch to 'view' mode to turn it around or zoom in and then back to 'interact mode' to try other actions. It is fun to experiment to see what you can do, and these puzzles are not only varied and clever, most are well integrated into the story. However, there is a big problem to overcome, as the interface is very unresponsive. If you're trying to twist off a cap or pour a liquid and the game doesn't react as you'd expect it to, you have no way of knowing whether you are doing it wrong or your inputs simply aren't being properly recognised. As the time you take directly influences your score, it can be really frustrating if a few minutes pass and you still haven't gotten anywhere with opening that washing machine door to have a look inside.

Interrogation of witnesses and suspects, all equally unwilling to cooperate, consists of several rounds. At the start of each, you will be shown several key words that have their own minigame attached (though you generally don't know which subject is associated with which type of puzzle or minigame). For instance, you can trigger a 'find the difference' minigame where you see two pictures of someone's apartment and you have to point out where changes were made. There's also a mini-quiz where the interviewee repeats their statement and you need to find inconsistencies compared to what they said before, an inventory selection task to present an item that incriminates someone, a 'psychological profile' where you have to rapidly tick the screen with the stylus when the suspect makes a particular movement (a bar decreasing over time and depleting very fast whenever you press at the wrong moment), and more. If you are lucky in getting activities you happen to be good at, you may finish the conversation in only two rounds (with two or three puzzles/minigames each) but if you fail one of them, you need to play a third round (exhausting all of the subjects). 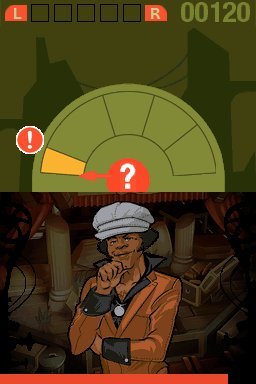 
During dialogues and quizzes, you need to select the answer you would like to give by drawing its corresponding symbol. Unfortunately, these symbols are often too much alike, such as the letter 'N', a mirrored 'N', a vertical line and a 'Z'. Sometimes the game will recognize a different symbol than you were actually drawing, like the first leg of your 'N' being acknowledged as a vertical line that results in a wrong answer through no fault of your own. I'm not sure why you can't simply touch the correct answer, as that would be much less accident-prone and more intuitive. Similarly, you have to be very precise with circling minigame differences, as you can easily get a wrong answer unintentionally.

The four stories are entertaining enough but a bit underwhelming, presenting somewhat clichéd characters that aren't easy to sympathise with. Apart from Red and police detective Roberts, you'll meet a couple of thieves, some family members and staff of the old lady, and the photographer's assistant, among others, but none of them stands out or is special in any way. Each case ends in a final 'showdown' where all the important facts and details of the case are repeated once more in a lengthy quiz, and within a limited amount of time you need to pick the correct statement from a set of four answers (again drawing a corresponding symbol) or answer true or false and finally choose the correct killer. 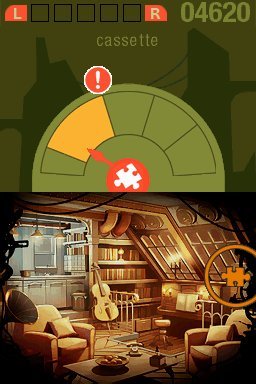 Two of the cases are connected though a shared character, but there isn't much to keep you interested for very long and there is a certain lack of overall purpose that leaves you never feeling particularly involved with the current case. You just click through the text without any real sense of wanting to know if your suspicions about the suspects are right. However, it is crucial that you pay close attention and remember the tiniest details from what witnesses say and even what they are wearing, along with information gathered from newspaper clippings or items seen in your surroundings, as there will be quizzes later that refer to them. These can be quite unforgiving, not just deducting points from your score but possibly even forcing you to start over.

Each time you start the game and during certain stages you have full access to your notebook where details are stored, but you can't access it during the quizzes. Even if you could, you wouldn't find everything you need, as the character portraits are in black and white so you can't really look up if someone 'loves' or 'hates' wearing red. Also, sometimes a character description mentions nothing about their build, so when asked if it's true or false that a suspect was 'stocky', you have no idea. Failing a quiz leads to fewer points and can also prompt a 'you fail' response, which means you'll have to replay the entire phase (AND get fewer points as the game keeps track of how many attempts you have made for any particular puzzle and phase).

Like its later console and PC counterparts, Metropolis Crimes has a very distinctive graphical style, featuring heavy use of browns, reds and golds in the nicely detailed but static 2D backgrounds and graphic novel-style cutscenes. During quizzes, the design is kept aesthetically minimal so there is little distraction, with various-coloured monochromatic character portraits shown on the upper screen. The close-ups of the objects you interact with are done in a very nice 3D. There is no spoken dialogue, but fortunately none of the annoying trills that some DS games substitute instead, leaving only the text itself. The music is fitting, consisting of catchy, simple tunes that do not distract you from the puzzles at hand but help set a tone of mystery and occasional despair. There is constant traffic noise from the city when you are on the street or in an apartment, and the interactive puzzles are accompanied by appropriate sounds of running water, screwing lids, tapping on wood, opening zippers or whatever else you are doing.

Metropolis Crimes is not very suitable as a mobile adventure, as it is obviously meant to be played a case at a time. Not being able to save manually, combined with the fact that you can't look up most of the important details later, means you can't really put the game down to continue a few hours later, let alone days or weeks after the fact. As each case lasts about two hours when played in one go, that makes it better fitted to very long commutes or just to play at home. If you like games that offer a bit of a challenge, there are certainly some fun puzzles on offer here. But the biggest crime of all in Metropolis is just how much better the game could have been if not for the unwieldy controls. No wonder the game itself is so hard to get a hold of.

The nicely integrated puzzles in Metropolis Crimes are fun to solve when they work, but the weak story and characters and overly frustrating controls will have you seeing red.

What our readers think of Metropolis Crimes