The sad, lonely plucking of an out-of-tune guitar. A tired old dog. An empty gas station. Trucks ambling down a distant highway. A squeaking mine cart with a flickering lamp...

That’s Kentucky Route Zero in a nutshell. A point-and-click adventure game, yes, but also a series of impressions, a "magical realist" love letter to the American South. This unsubtitled first act (of an eventual five) is a wondrous introduction to this strange yet familiar world, developed by a team of only two men at Cardboard Computer, Jake Elliott and Tamas Kemenczy, with a startlingly clear vision.

In Kentucky Route Zero, you play as Conway, a delivery truck driver for an antique shop. You and your trusty dog are en route to deliver... well, something to someone. It’s not important right now. Maybe it will be later, it’s hard to say. Conway arrives at a gas station off of the highway to ask for directions. The gas station is shaped like a horse’s head, which is weird. The old man who sits out front speaks cryptically and tells Conway he’s going to want to take the titular Route Zero. 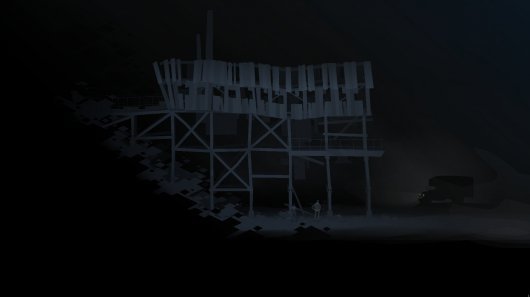 And that’s the entire setup. From there you’ll encounter a number of strange people and curious sights. You’ll explore a long-abandoned mine and drive past a prosthetic arm factory, just to name a few. I don’t want to go into too much detail because this is a game of plaintive discovery, one where revelations are reached not with an Inception-style BWAAAAM! but a “Well, ain’t that somethin’.” It’s a quiet game of introspection and subdued charm, with a cast of damaged characters who try to thread the emotional needle, embodying pure, polite Southern hospitality while pushing down their deeply-ingrained sadness. Whether it’s Conway, a blind gas station attendant, or a TV repair woman, everyone here has lost something important, whether it’s love or property or a dream, and if you play your cards right you might get them to tell you about it a little. The characters are as fascinating as they are mysterious.

The first thing you notice when you boot up the game is its distinctive visual style. Kentucky Route Zero is a looker—not because of an orgy of post-processing like many modern games, and not because it pulls at nostalgic heartstrings with retro pixel art. If anything, its smooth vector art, solid shapes, and muted palette bring to mind Another World, Eric Chahi’s twenty year-old masterpiece. Characters and landscapes are made of solid shapes with minimal lighting and often only a few planes of depth, as if the designers glued pieces of construction paper together to create the scene. But these simplistic building blocks make for some awe-inspiring compositions. It’s a cliché, but in this case an appropriate one: you could take any one screenshot from Kentucky Route Zero, frame it, and hang it on a wall as art. Even that would be missing something, though, as the game looks even better in motion with some truly clever uses of perspective, as foregrounds melt away and backgrounds fade into being, or as the foreground turns into a silhouette against a lit backdrop. It’s quite simply one of the most gorgeous games I’ve ever played.

The sound, too, is marvelous. An ambient score by Ben Babbitt sits alongside bluegrass standards provided by The Bedquilt Ramblers to perfectly evoke the atmosphere the developers are going for—one part familiar Americana, one part Lynchian surreality. For much of the game, there is no music. Instead you’ll be drawn in by vivid sound design: wind whistling through mine shafts, the creaking of a weathervane, the rumbling of an idle truck engine. The game uses just enough sound, and just the right sounds, to fully immerse the player. 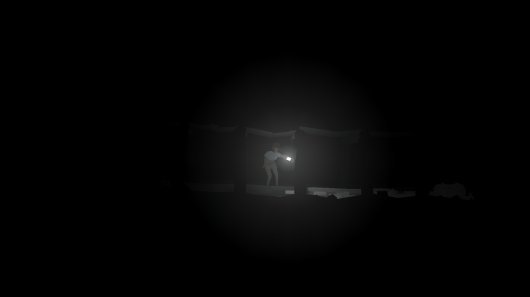 Well, atmosphere’s nice and all, I hear you saying, but where’s the game? At it’s core, Kentucky Route Zero is a traditional point-and-click adventure. Moving Conway near hotspots will pop up a small bubble with icons indicating available actions. There’s no inventory to speak of, though sometimes at predetermined points an icon will appear at the bottom of the screen to show that you can use an item you’re holding, such as a lantern you can turn on and off. When moving between areas, you are taken to screen that resembles a highway map that harkens back to the '80s arcade game Battlezone, all white vector lines against a stark black backdrop.

None of this is particularly complex, nor does it need to be; Kentucky Route Zero is decidedly light on gameplay. The only real puzzles are finding locations on the highway map based on people’s vague directions, but even those are only momentary obstacles, easily overcome. The game does give you goals, but they are more there to nudge you into new locations for exploration than devious puzzles meant to trip you up. There are no doors locked with sliders or inventory puzzles here. You pretty much just walk around, look at things, and talk to people.

While the game could stand to have more than a couple of hotspots at most in a given place without losing its carefully cultivated atmosphere, what’s here is glorious. This is a world where just looking and talking is enough. Much of that is due to the presentation. The rest leans on the strength of the writing, which is sharp, weird, funny, and sad in a way very few games have achieved. The script is strikingly literate, just as much influenced by the Southern Gothic tradition as by David Lynch and Tim Schafer. I was sold as soon as I clicked on the very first available hotspot—my dog. The game told me: “An old dog in a straw hat. Both have seen better days.” When you reach your hand into a fish tank at a bait shop just off the highway, you can never be quite sure whether you’re going to get a sight gag, a wistful snippet of poetry, or a hallucinogenic trip. 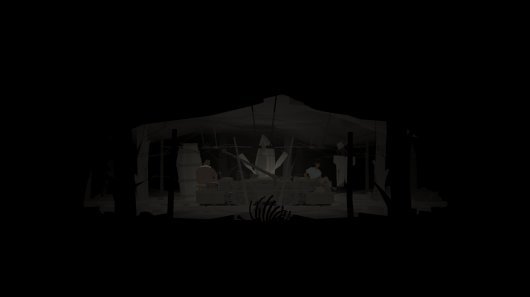 Although most on-screen action is relayed through textual descriptions rather than animations and there is no voice acting whatsoever, the fact that the writing is so varied and evocative makes you forget that you're just reading, never breaking the immersion. There’s also quite a bit of choice—nothing substantial, mind you; this isn’t The Walking Dead, nor is it trying to be. You won’t be choosing whether characters live or die, but you will leave your mark on the story, naming your dog and things like that. One early task involves entering a password on a computer. The owner of the computer has forgotten the password but tells you to just “feel it out.” The game gives you a choice of several fragments of poetry, and from these fragments you build a poem as the password. You can’t get it wrong—and as far as I can tell, the choice you make doesn’t come back later or affect anything, at least in this episode. It’s simply a choice, a chance to participate in building the wonderfully strange world of this Bizarro Kentucky. The game is riddled with moments like this—choices that are technically superficial but are imbued with a sense of gravitas and charm. You are even helping to build Conway as a character. Is your Conway given to bouts of melancholy daydreaming, or is he a reticent, no-nonsense type?

I suppose that’s the litmus test for whether you’re going to enjoy Kentucky Route Zero as much as I did. If you play games primarily to cultivate skills and overcome obstacles, you’re likely to find this adventure lacking. There is almost no traditional challenge, but that’s not a failure on the developer’s part, it’s a choice. Like other games that lack what we typically think of as gameplay, such as Dear Esther or Photopia, Kentucky Route Zero is a collaborative effort in that it relies almost as much on what you bring to the experience as it does on what the developers have laid out before you.

Kentucky Route Zero is a hard game to encapsulate. There’s plenty to gush over, but beyond the lush graphics and stellar writing, there is a freshness to the game that’s hard to describe without devolving into vagueness and pretension. Generally we rate games based on the quality of their game-like aspects, but here I am recommending a game based on everything but. This is a short story or a tone poem in game clothing. It will challenge you through unconventional storytelling rather than puzzles, it will draw you in with its quiet beauty rather than vibrancy. It’s mechanically simple, linear, and alarmingly short (my playthrough took two hours but for the less patient it could easily be finished in half the time). Even so, Cardboard Computer has made something beautiful and bizarre. I look forward to seeing where Route Zero takes Conway and me, and I encourage you to lose yourself in this brave old world.

As much a poem as it is a game, Kentucky Route Zero: Act I is the bizarre, lovely first leg of a road trip into the sad, strange heart of America.

GAME INFO Kentucky Route Zero: Act I is an adventure game by Cardboard Computer released in 2013 for Linux, Mac, PC, PlayStation 4, Switch and Xbox One. It has a Stylized art style, presented in 2D or 2.5D and is played in a Third-Person perspective. You can download Kentucky Route Zero: Act I from: We get a small commission from any game you buy through these links.
The Good:
The Bad:
The Good:
The Bad:

What our readers think of Kentucky Route Zero: Act I