Last year, a TV show debuted in the U.S. named Awake, about a man who was living in two different realities: in one, his wife had died in a car accident, and in the other, his wife survived but his son died. I was initially fascinated by the premise, but after a few episodes I grew impatient with the protagonist’s inability to change his fate. He was living two lives, unable to merge the parallel realities into one with his family intact. (Apparently I wasn’t the only frustrated viewer; the show has since been canceled.) Even though Tinnitus Games, a new German developer made up of former Black Mirror 2 and 3 team members, never saw Awake, they’ve come up with a very similar dilemma in the first episode of Reperfection. This time, however, the family can be reunited—if only you can figure out how to make it happen.

Rather than being inspired by a TV show, Reperfection has obviously been influenced by another form of storytelling: graphic novels. Upon launching this downloadable game, the first thing you’ll see is a menu styled like a comic book cover, where a man is holding a woman’s limp body in front of a horrific pile-up of vehicular wreckage. Select "New Game" and the comic flips open to reveal blank pages with only one panel filled in. The artwork is black and white with occasional key items appearing in red, and text appears in conversation bubbles (the game is not voiced). The 2D backgrounds are static, with characters “tweening” from one position to another to suggest movement. Appropriately for a comic book, there is no fluid animation.

The story opens on Tuesday at 2:00pm, with married couple Ben and Sarah Freeman talking in their living room about how they’ll spend the afternoon. Ben’s off work and hopes to spend some quality time with his wife, but she’s late for an appointment near their son’s elementary school. Sarah rushes to take a shower while Ben lies down on the couch to watch TV. At this point, the player takes control and begins to learn more about the Freemans’ home life by interacting with items around the house. 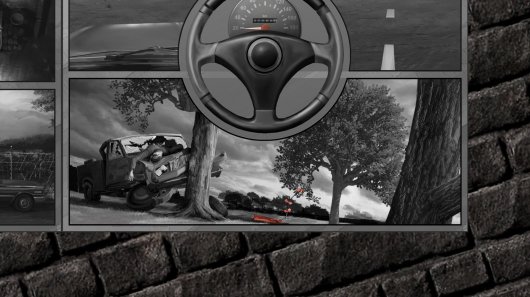 Reperfection’s interface is mouse-driven and straightforward. To interact with hotspots, you hold down the left mouse button and icons appear that indicate which actions you can take (the standard look, talk, etc.). Still holding the mouse button, you must drag the cursor over one of these icons to select it. It’s awkward at first—I would have preferred for the action icons to stay visible after the initial click, without requiring that the mouse button be held down—but it’s easy enough to get the hang of. The items you can interact with inside the Freemans’ house, such as family photos and paintings son Danny made at school, portray a quiet and contented suburban lifestyle. As you explore, views of other areas appear in different comic panels on the formerly blank page, giving the feeling that the story is unfolding based on your actions.

Soon enough, Sarah finishes her shower and runs out the door, promising to bring home a pizza for dinner. And this is when fate kicks in: the soccer match Ben’s watching on TV is interrupted by breaking news of a huge traffic accident near Danny’s school. Ben tries to get his wife on the phone, but it goes straight to voice mail…

The page turns. Now it’s Friday at 10:00am, and Sarah’s funeral is taking place in a small church on a picturesque hillside. Ben stands in the aisle, hesitating before the casket. The seats behind him are packed with mourners; Danny sits alone off to one side. As Ben approaches the casket and opens the lid to say a final goodbye, he looks into Sarah’s eyes and the screen begins to spin. Suddenly Ben and Sarah are back in the house, on Tuesday afternoon, with Sarah rushing to her appointment and Ben hopeful that he can save her life. 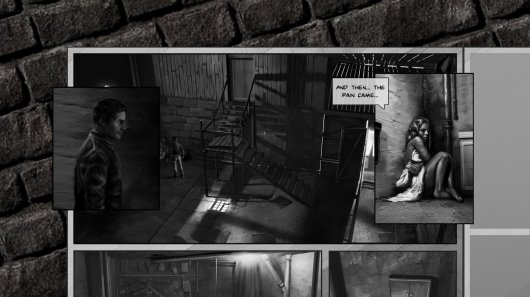 If the Freeman family’s happiness, established in the 5-10 minute intro I’ve just described, is the heart of Reperfection, Ben’s ability to turn back time is the game’s soul. He discovers that by looking into a dead person’s eyes, he can travel back to the minutes before their death and attempt to change their fate. It’s the chance that Awake’s unfortunate protagonist never had, but as you might expect, success isn’t a simple matter of altering one or two events. No matter what Ben tries, the multi-vehicle accident will still occur with equally tragic consequences: if Sarah doesn’t make it to the school, then Danny gets on the bus and dies instead.

Ben can only save his family by preventing the accident altogether—working his way through a chain of the recently dead, reliving their last moments, and altering their fates ever so slightly until he’s able to pinpoint the event that started it all. This quest takes Ben down a gripping, at times surprising path that sets up a larger story to be addressed in future episodes. (This game is billed as Volume 1; there are two more installments planned, each to be released about six months apart.) 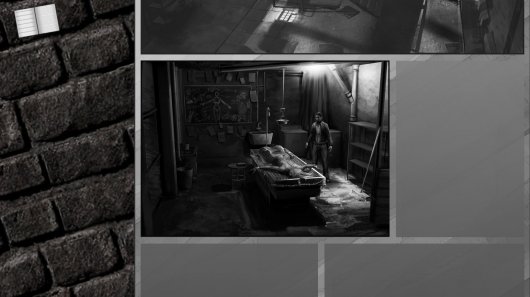 Reperfection is much more an interactive storybook than a full-fledged adventure game, but the developers’ point-and-click pedigree shows in a handful of interactive dialogue exchanges, a logic puzzle, and several simple inventory puzzles. Ben eventually uncovers multiple versions of the moments before the accident; switching among these in search of the ultimate solution adds complexity to the storytelling, but the tasks encountered within each scenario are extremely straightforward, with little challenge or brainpower required. Personally, I’m happy to have a story carry me through a game without difficult puzzles getting in the way, but those who prefer complex puzzling will find Reperfection much too easy. As Ben’s experiences pile up and he realizes what he needs to do, figuring out how to orchestrate the endgame does provide a nice a-ha! moment, but it’s relative—in an adventure this lite, even a tiny challenge feels like a big achievement.

Though its story is Reperfection’s biggest asset, some flaws hold it back. The script was originally written in German and while the English translation is mostly good, it still suffers from the occasional clumsy phrase. The story also has a few incongruities where Ben seems to understand what’s going on ahead of the clues he’s uncovered. And the central either/or paradox becomes strained as Ben experiments with different scenarios. Is Sarah headed to an appointment near the school, or is she picking up Danny from school? Apparently both, which muddies the cause-and-effect of the accident’s possible outcome. If Danny is expecting his mom to pick him up, why does he get on the bus? And if he’s not expecting to be picked up, how come there’s no scenario where both mother and son die in the accident? It might sound like I’m nitpicking, but I’d counter that these types of logistics need to be airtight or the whole premise falls apart.

For me, though, the biggest storytelling problem arises from the game’s brisk pacing. The game’s initial tragedies are over too quickly to really feel for the characters (in contrast to the slower, more heart-wrenching build-up in games like Heavy Rain or To the Moon), and Ben comes to grips with his supernatural ability and the task at hand way too easily to be believed. Volume 1 has only an hour or two of content, so it’s understandable that some shortcuts were taken, but Ben’s quick acceptance of the situation kept me from empathizing the way I expect to in a tragedy-tinged, character-centric drama. In a game based on a man’s increasingly desperate attempts to save his family, this emotional disconnect seems like a huge missed opportunity. The music helps somewhat, particularly the slow piano tune accentuated with haunting female vocals that plays during the funerals. But it’s not enough to compensate for the lack of gradual character development and genuine emotion. 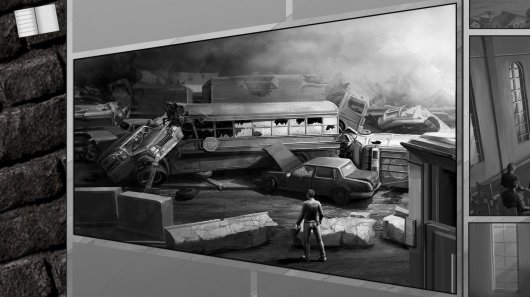 Besides the Freemans’ suburban home, locations include Danny’s school, the scene of the car crash, and a creepy abandoned warehouse. You return to the same locations over and over as you figure out how to change the future—repetition that can make a small game feel even smaller—but with each visit, the situation has changed slightly, which adds interest. Even so, interactivity is pretty sparse, with only a couple of rooms to explore in each location and only a few hotspots in each of those, guaranteeing that only players who are okay with story far outweighing puzzles and exploration will appreciate the experience.

Aesthetically, Reperfection’s black and white art style does set it apart, but it strikes me more as a gimmick than a suitable artistic decision. Rather than emulating hand-drawn comic book art, which would use dark outlines, hatch-marks, and pencil shading to indicate depth, here the backgrounds look like traditional computer-generated graphics along the same lines as you’d find in a game like Black Mirror, but with all of the color stripped out. If you look closely, you’ll see that quite a bit of shading and detail is present, but with only shades of gray the backgrounds are unnecessarily dull and muddy. I admire that the developers were trying to do something different; I just don’t think it worked. At least you can adjust the graphics’ fidelity when you first launch the game, so those with big monitors and beefy graphics cards can crank up the resolution and quality to make the most of the visuals.

Reperfection’s premise may be familiar—besides Awake, it also has shades of the movie Premonition and the Nintendo DS adventure Time Hollow—but the presentation is unique and the domestic saga at its core is rare among adventure games. Midway through, the story veers off in a direction I wasn’t expecting, and it ends with a provoking cliffhanger (totally appropriate from a storytelling standpoint, but a bit disappointing considering Volume 2 is still months away). How the series will hold up as an episodic trilogy remains to be seen, but it certainly has the potential to grow into a powerful interactive story. As a standalone game, the first episode’s short length and unresolved ending may leave you surprised that it’s over so soon—but if you’re intrigued by the story and don’t mind an adventure that’s mostly on rails, you’ll probably enjoy Reperfection while it lasts.

Reperfection is unlike anything you’ve played before and Volume 1 shows promise, but its highly streamlined gameplay and short length will make it too shallow for some.

GAME INFO Reperfection: Volume 1 is an adventure game by Tinnitus Games released in 2012 for Android and PC. It has a Stylized art style, presented in Slideshow and is played in a Third-Person perspective.

What our readers think of Reperfection: Volume 1