As a grassroots publisher, Wadjet Eye Games have proven themselves to have an eye for independent talent that’s second to none, particularly in the realm of science fiction. After helping get Joshua Nuernberger’s incredible Gemini Rue and Vince Twelve’s brilliant Resonance completed, Wadjet Eye turned its attention to Wormwood Studios, a three-man team with years of individual industry experience who have joined together to present a singular vision of a post-human world. The result is another golden egg (albeit a very brown golden egg) of sci-fi adventuring in the form of Primordia.

A 2D point-and-click adventure in the classical style, Primordia follows the quest of one Horatio Nullbuilt v5—an android—and his floating companion Crispin Horatiobuilt v1—also a machine. Indeed, there are no traces of people on the planet, only a self-propagating race of robots, some of whom worship the ancient, legendary creator of robotkind, Man. Horatio is one such Humanist, believing that Man left robots as shepherds to watch over the planet they left behind. But what a bang-up job they’ve done. The world Horatio and Crispin inhabit is the very definition of a wasteland: sand dunes stretch into infinity, dotted with the scattered wreckage of crashed ships, disabled robots, and the ruins of war-torn cities.

As we meet our heroes, they are living semi-hermetic lives out in the desert, attempting to repair their ship, the severely-damaged UNNIIC, with only the eerie radio broadcasts out of Metropol—a seemingly robo-communist utopia—to keep them company. Before long, they are attacked by an unknown monolithic, laser-equipped robot who blasts his way into the ship and forcibly steals their coveted and rare power core. Stranded without power, Horatio and Crispin must set out to recover their stolen property, or at the very least replace it. 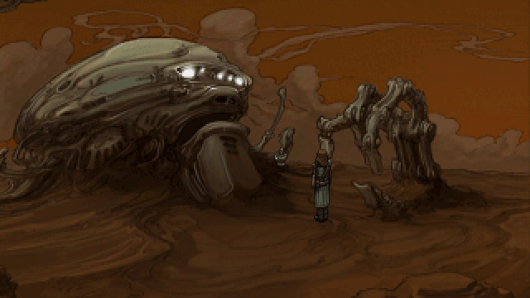 These simple beginnings slowly mutate into a much more involved tale of utopian ideals, political upheaval, and religious oppression once you eventually and (unsurprisingly) head to Metropol, a troubled city that has undergone some serious regime changes in the recent past. Eventually, Horatio’s quest for his stolen power core will plunge him deep into Metropol’s messy political landscape and force him to take sides in a conflict he’d rather have nothing to do with. It takes a while to get there, however, and the game can seem a little slow up to that point as you spend the first couple of hours ambling around digging through junk piles, but once it gets going it keeps the new characters, places, and ideas coming at a good clip.

All of this is told in a visual style that seems to draw from Amanita Design’s Machinarium, French comic artist Moebius, and classic science fiction such as Dune. Despite the relatively humble nature of the retro pixel art graphics, which are low resolution and feature little to no animation, Primordia is a visual triumph. The backgrounds drip with atmosphere, with even minor locations full of sweeping lines, gritty details, and muted colors that suggest a strange culture decades, possibly centuries, past anything that could have been considered prosperity. Despite being primarily brown and gray, including the oppressive sky, the backgrounds and characters are detailed, memorable, and varied. Instead of feeling repetitive, the color palette is leveraged effectively to evoke desolation and decay. Combined with the moody electronic soundtrack that resembles Vangelis’s classic Blade Runner score—all swelling pads and ethereal ambience—Primordia easily transports you to a rich and strange world.

The atmosphere is so wonderfully dreary that it almost—almost—clashes with the relatively lighter tone of the rest of the game. While the story definitely goes to some dark places, and there is a layer of gloom hanging over nearly every conversation and set piece, much of the game actually seems kind of light-hearted. Horatio may be stoic and gravelly, voiced by Bastion narrator Logan Cunningham, but Crispin (Abe Goldfarb, Blackwell's Joey Mallone) fulfills every stereotype of the comic relief sidekick, joking and punning his way through almost every one of his lines. And many of the characters you’ll run into are colorfully goofy, from the posh Oswald, complete with top hat and monocle, to a bot obsessed with prime numbers and rhyming. 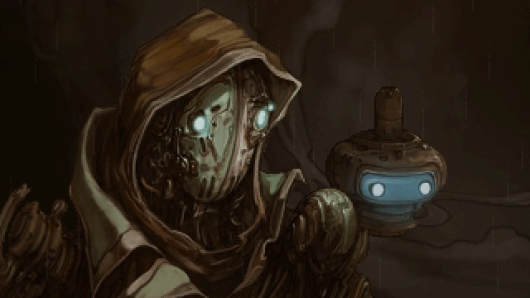 It’s not that these lighter moments aren’t funny; they’re well-written, well-acted, and often downright charming. But with the foreboding and moody aesthetic that dominates otherwise, it’s a little jarring that much of the character interaction hews closer to WALL-E than The Road. To be clear, I’m not complaining. In fact, after I realized the tone wasn’t going to be what I expected, I got used to it, and by the end I felt that it had enhanced what might have been an unrelentingly gloomy experience without it.

It’s the richness of the characters that makes the jumps between light-hearted robot comedy and grim post-apocalyptic dystopian fiction work. Despite the cast being populated by machines, these are, for the most part, fully fleshed out personalities. Robots may need to recharge instead of eat or sleep, but they have wants and needs like any human. They may desire justice or freedom, have senses of humor, or feel sadness at the deactivation of another robot. They are all, to some extent, enslaved by their own core logic, whatever that dictates. Horatio can’t help but eschew societal integration in favor of a life of rugged individualism, however lonely. Charity, an assistant to Metropol’s former legal authority (think a one-man supreme court), works constantly to push her feelings aside and view the world only in the black and white impartiality of the law. Even Crispin, who at first might seem like a shallow jokester, has a carefully constructed set of desires. 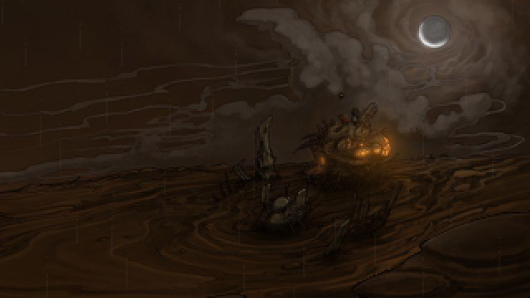 Other than the aesthetics and story, Primordia is about as traditional a point-and-click adventure as they come. Hotspots are labeled as you hover over them; left-clicking interacts, right-clicking examines. You store items in your inventory, where they can be combined or used in the environment. You can interact with Crispin at any time, either by using his inventory icon on hotspots or using items on him, often when there is something that only he can reach with his maglev hover ability. You can also talk to him to receive a tiny hint, which is usually no more than a nudge in the right direction. Horatio keeps a datapouch that automatically stores important notes such as codes and key conversation points, as well as a map that allows you to jump between main locations instantly. You’ll love having that ability when moving between bombed-out train stations, junkyards half-buried in sand, and crumbling towers that comprise so much of Primordia’s decayed world.

In terms of gameplay, there’s very little here that will surprise anyone who’s ever played an adventure game. You’ll scour environments for useful items, gather clues from conversations, and figure out lots and lots of keycodes. I’d wager that a good 2/3 of the puzzles in this game involve doors locked by codes that must be deciphered, constructed from various clues, or extracted from NPCs. To get those codes, you’ll run the gamut of standard adventure obstacles, combining items into new gadgets, navigating conversation trees, dealing with logic puzzles and even doing some light math. The game is reasonably challenging without being frustrating, and puzzles include plenty of feedback and signposting to guide you to the right solution instead of leaving you in the dark. So all in all, very well done, if a little on the safe side.

Many of the puzzles have multiple solutions, but these branching solutions are so subtly woven into the game that I rarely realized a choice was available. Primordia is not the type of game that smacks you over the head and says, “You can go through the sewers or you can convince somebody to open the door.” Most of the time it just seemed like I was discovering the solution that made the most sense, without ever knowing there were other options. But then, isn’t that the way it should be? 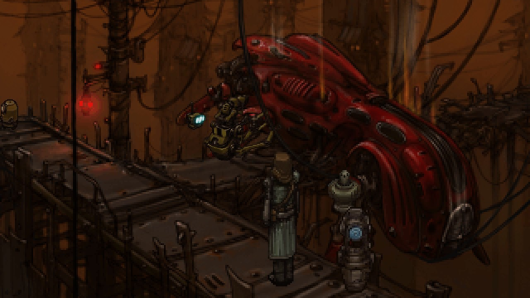 Decision-making doesn’t just stop at puzzles. For a game that heavily features the theme of free will, it makes sense that it would involve a number of player choices that influence the outcome. Some of these are obvious—near the end you’ll have a number of choices that directly affect which of the ten(!) endings you’ll get. But some are not so obvious. In fact, I was making choices throughout the game that I didn’t even realize were choices. The way one deals with a particular religious zealot early on, for example, can slightly impact one of the existing endings. The effects are small but it does add a layer of replay value and reinforces the game’s concepts. And considering the game is roughly 7-10 hours long the first time through, there’s already quite a bit of content to begin with.

If Primordia had been released in the '90s, there’s a good chance we would be talking about it with the same reverence as minor classics like Snatcher or Beneath A Steel Sky. I have very little to actually criticize about the game—it’s a uniquely gorgeous sci-fi game with style to spare, a plot that veers successfully between goofy humor and suitable solemnity, and puzzles with multiple solutions that feel like logical extensions of the situation. It's only in more subtle ways that it falls a little short of the genre masterpieces. It has lofty goals, exploring profound themes such as collectivism vs. individualism, free will vs. conditioning, religious faith vs. pure logic, but it doesn’t seem to reach the depths of its potential. The puzzles are satisfying but none are outstandingly clever, the characters are likeable without being truly unforgettable, and so on.

None of this is a knock on what Wormwood Studios has achieved, however, as every part of the game screams of the passion and talent of its developers. Like other indie designers Wadjet Eye has taken under wing, this team has proven itself a studio to watch. For their first outing, Primordia is already a great game, and I look forward to seeing more from them in future.

GAME INFO Primordia is an adventure game by Wormwood Studios released in 2012 for iPad, iPhone and PC. It has a Stylized art style, presented in 2D or 2.5D and is played in a Third-Person perspective.