Review for The Walking Dead: Episode Five - No Time Left 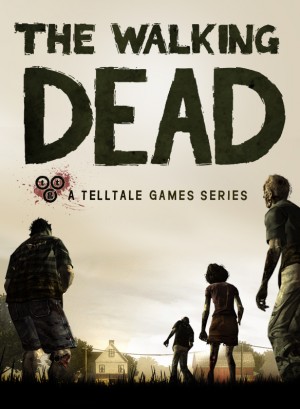 We get a small commission from any books sold.
All Bitmap Books
Written by
Reece Warrender — December 3, 2012

Warning: This review contains information relating to the conclusion of Episode Four.

The title No Time Left for the final episode of The Walking Dead's first season is a fair statement given the dramatic turn of events that preceded it. Lee is faced with a crucial decision, desperate to find the kidnapped Clementine while he's still able, and depending on your decisions to date your party may be split. From the opening moment, there’s a constant sense of great urgency in the air and every step forward adds even more tension.

Without any real direction for where to look, you’ll embark on a rescue mission with those whose trust you’ve gained over the course of previous episodes – which in my case resulted in only Kenny refusing to help. You'll first venture back to the hospital hoping to find Vernon's group; the place is deserted, but it does contain some useful instruments you may choose to utilise in one of the more excruciating scenes to date. Returning to the mansion proves disastrous as well, as its safety is now hopelessly compromised.

Eventually you find the lead you’re after, and of course it's a highly risky venture across the zombie-infested city. The majority of the episode takes place on this difficult journey, constantly pushing forward through new dangers with an absolute resolve to find Clementine. The surviving cast has been through a lot getting this far, but prior events were a breeze compared to the struggle that remains; doubly so for Lee. 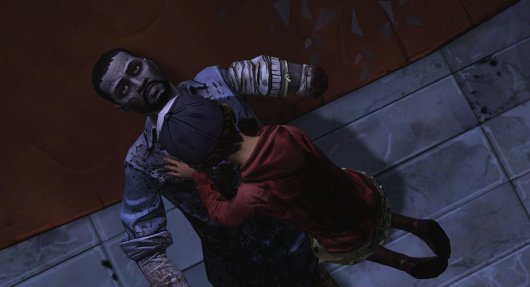 Telltale have done a brilliant job of maintaining momentum to date by focusing on the relationships between characters to provide more emotional impact. The emphasis of No Time Left is on Lee's struggle for survival and the need to find Clementine, giving greater significance to dialogue, player choice and atmosphere than action, puzzles and challenge. Where prior conflicts have been spread among the various group members, the focus this time around is largely on Lee and Clementine, and the close relationship that has developed between guardian and child.

Whilst there are no traditional puzzle elements in this episode (unless you count moving a ladder to a gap), there are several action scenes to contend with, including the largest zombie encounter yet. These confrontations once again take the form of Quick Time Events, in which you need to react quickly to defend yourself or kick, slice and shoot oncoming zombies. All ammo is spent before long, so reliance falls on any remotely suitable handheld weapon. It’s good to see the sense of survival return instead of the infinite ammo supply and casual ease with which zombies could be dispatched in the previous episode. The zombies are no mere nuisance here, but a seemingly unstoppable force that is devastating the team and preventing Clementine's rescue.

The presentation of this episode reaches an all-time high, with numerous music swells that contribute greatly to the most gut-wrenching scenes, particularly the folk music that follows the credits. Additionally, whilst I’ve always been impressed by the graphic novel visual style of the series, it hasn't been until now that I’ve truly been able to appreciate the detailed facial expressions. Conveying emotion in video games typically fails to deliver, but even something as subtle as a glare between Lee and Kenny speaks volumes here. The characters are beaten, broken and battered, and even in silence you’re acutely aware of their condition. 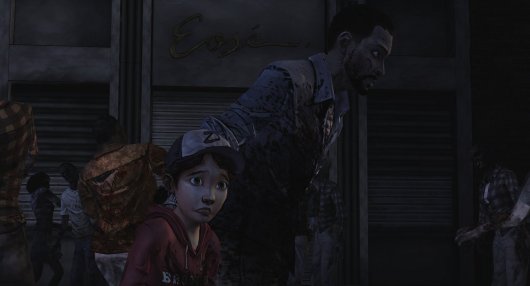 Thankfully, the engine's stability, particularly in terms of frame stuttering I experienced early on, seems to have improved considerably with each episode, but the same save and statistic bugs remain (at least for many players). It would be wise to back up your saves before installing and running the latest episode to prevent them from potentially disappearing. There's nothing you can do to avoid the end-game statistics showing only blank data instead of player choice percentages, though this glitch doesn't seem to affect everyone.

The story doesn’t branch to different endings, nor do your choices drastically impact the overall outcome. Instead, the perception of others towards you and your emotional engagement with them depends on your actions, and whilst the same road is trod by all, ultimately the journey feels very personal. Regardless of the persona you’ve had Lee adopt throughout the series, he’s evolved a great deal from the convicted murderer originally introduced. The one attribute that remains unchanged is Lee’s love for Clementine and his unwavering desire to protect her from any danger. It’s a beautiful connection that’s extremely easy to become immersed in, and that’s ultimately because the most impressive achievement of the series may be Clementine herself.

Portraying children in videogames has always proven extremely difficult; they either come across as too needy and frustrating or too mature and unrealistic in the given context. Clementine is neither of these, fitting exactly in between. She's an innocent child thrown into a world in which she quickly needs to grow up and face challenges that far exceed her age. You never once feel frustrated with her, and over the course of the series you will develop a bond that ensures you'll go to great lengths to protect her. As Lee, you’re the father figure to an extremely impressionable, inquisitive child in a world in which children are not welcome – and the events that play out in the finale will have you so emotionally attached to Clementine it’ll catch you by surprise. It’s beautiful and brilliantly executed. 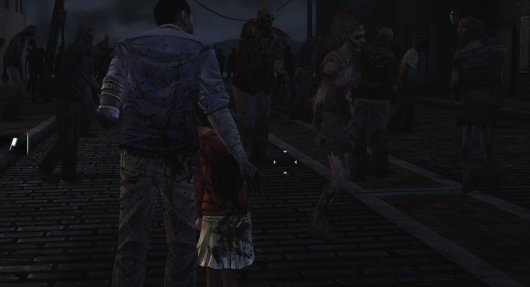 No Time Left is the shortest episode in the series, coming to a close around the two-hour mark, but despite its short length you’ll experience a tense series of ups and downs, watching the group repeatedly build up hope as they cling to desperate solutions only to find circumstances kick them back down again and again. At several points I anticipated the seemingly obvious direction that Telltale were planning to take, only to have my assumptions promptly dismissed by turns of events that I never saw coming. The truth regarding the identity of the mysterious stranger tie brilliantly into past decisions, and secondary characters are rejuvenated: Kenny finally cools his temper (after a handful of typical Kenny outbursts), while Omid and Christa finally get such much needed depth and significance.

But it’s the grand finale in No Time Left that the series as a whole will be remembered for, thanks to the brilliance of its build-up, superb dialogue, and compelling scene direction. Even if you do guess the outcome ahead of time, it's impossible not to feel emotional over the heart-wrenching endgame scenario, particularly since you've so fully invested yourself in the characters in ways that most games never even approach.

By the time No Time Left comes to its dramatic close, you’ll be emotionally exhausted, to say the least. The full season has been a rollercoaster ride with many highs and a few lows (for players, that is – the other way around for the characters themselves), but Telltale have managed something genuinely poignant in the end. From a pure gameplay perspective, the simple and sparse puzzles can be considered quite lightweight, but ultimately it’s the gravity of the engaging story, memorable characters,  immersive atmosphere, and personal decision-making investment that elevate The Walking Dead to a serious candidate for game of the year.

WHERE CAN I DOWNLOAD The Walking Dead: Episode Five - No Time Left

The Walking Dead: Episode Five - No Time Left is available at:

It’s extraordinarily rare for a game to possess scenes of such powerful emotion, but Telltale have managed something special with The Walking Dead finale, and it’d be a tragedy to miss it.

GAME INFO The Walking Dead: Episode Five - No Time Left is an adventure game by Telltale Games released in 2012 for Android, iPad, iPhone, Mac, PC, PlayStation 3, PlayStation 4, Switch, Xbox 360 and Xbox One. It has a Stylized art style, presented in Realtime 3D and is played in a Third-Person perspective.

What our readers think of The Walking Dead: Episode Five - No Time Left