After three games under the leadership of Highway Patrolman-turned-game designer Jim Walls, Sierra’s Police Quest series changed directions, opting for a much grittier and more realistic approach by bringing in LAPD Police Chief Daryl Gates to guide the next game, trading in the charming avenues of the fictional town of Lytton for the very real and dangerous streets of Los Angeles. While the changes aren’t entirely unwelcome for a series that seemed to be running out of ideas and local dangers for Sonny Bonds, many of the nice touches, humor, and engaging storytelling found previously are absent from Police Quest: Open Season.

The graphics are easily the biggest change from earlier games, and the series’ technical specs all received a sizable boost. Gone are the cartoon figures, and in their place are fully digitized actors. Developed in 1993, just before FMV games caught on (and then eventually going the way of Betamax and Menudo), Sierra obviously intended to take advantage of the PC’s advancing capabilities. New designer Tammy Dargan wanted Police Quest to be more real, mature, and adult. To that end, in came real actors, voiced dialogue and a host of real-life locations to visit, including the Parker Center, Griffith Park, and the notorious corner of Hollywood & Vine.

This was quite a departure for a company still producing King’s Quests at the time, and perhaps the most obvious moment of Police Quest’s new angle is your visit (on official business, mind you) to a strip club. Sure enough, the exotic dancers in the background are also digitized animations – though at least Sierra had the decency to give them pixelated pasties. 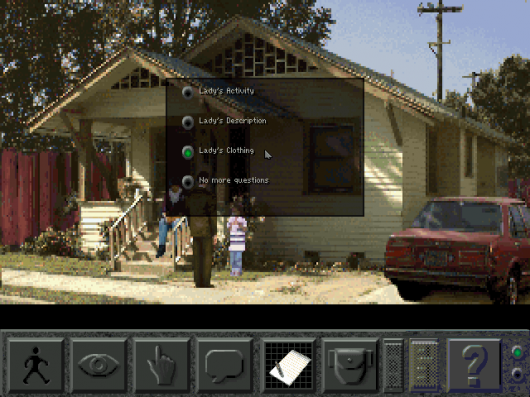 Yet despite all these upgrades, Open Season begins almost eerily similar to the first three. This time around you’re Homicide Detective John Carie rather than Sonny Bonds, but you’re still going to earn points by precisely following the police procedurals included with the game. Also, just as in PQ 1-3, there’s a menacing threat which will grow ever more prescient and dangerous to the town you’ve sworn to protect.

Throughout the game, you’ll be hunting down a serial killer – a bit of déjà vu if you played PQ3 – who is preying on cops in L.A. while dealing with the press and a scared City Council breathing down your neck. But somewhere along the way, something goes wrong in what was a tried-and-true formula. As you progress, both the mechanics and narrative begin to break down, offering an often confusing and frustrating adventure that eventually spirals into perhaps the most mystifying denouement you can experience in a videogame.

Along with the revamped graphics, a full soundtrack designed to take your then-new sound card to the limit also reinforces the notion that Sierra's real focus for Police Quest 4 was its technical features, and not its story or gameplay. The musical score is responsive and dynamic. When Officer Carie is in danger, the correct cues are played; when he’s conducting routine police work, a simple theme provides accompaniment; and when he steps in an elevator, he even gets treated to a few moments of muzak. The problem is, it’s not done with much subtlety, and especially when Carie uncovers more gruesome clues it begins to venture into being overly kitschy. 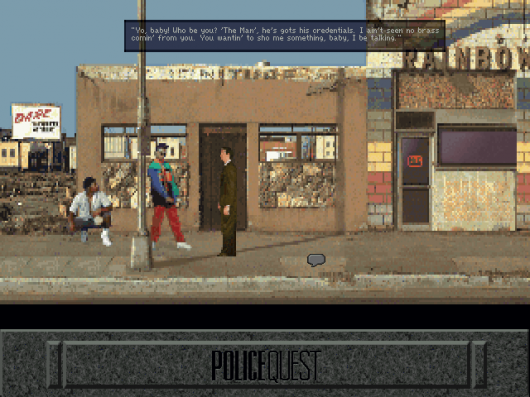 But it’s truly the dialogue that seals the deal. You’ve probably heard better dialogue on Mystery Science Theater. Even taking into account modest expectations for acting in 1993, the cast is forced to utter some of the most banal lines you’re likely to hear in any game, and the actors don’t seem to be aware of the situation they’re in or who they might be talking to. Even worse is the way the game uses stereotypes for cheap laughs. Unfortunately, PQ4 repeats the most egregious sins of its direct predecessor, drawing on ethnic clichés to provide a humorous contrast to Carie’s unflinching straight man. One character in particular, there to represent the decadence of Hollywood & Vine, paints a caricature we’d hopefully left behind in the '80s.

Carie himself is perhaps the best of the cast, but even he falls into the trap of sounding as if he’s auditioning for the lead in the Steven Wright story. His character is not dissimilar to Sonny Bonds, in that he’s playing the white police knight of L.A., sworn to overcome any and all evils by following the book to its very last letter. Some people may find charm in this – there was something redeemable in Sonny’s nigh-quixotic quest to save Lytton from the constant threat of outside evils, and how the PQ series always loved to reinforce his viewpoint of a black and white world. Carie’s L.A. is a bit murkier, but by and large it’s still a comic book perspective. Unfortunately, Carie is never given any true humanity. Where Bonds had his Mary to save and a home you could visit, Carie is an entirely blank slate, neither engaging nor compelling. There’s never a moment that the game explains his motivations, and he shows little emotion even over his best friend’s death (and then misses the funeral). 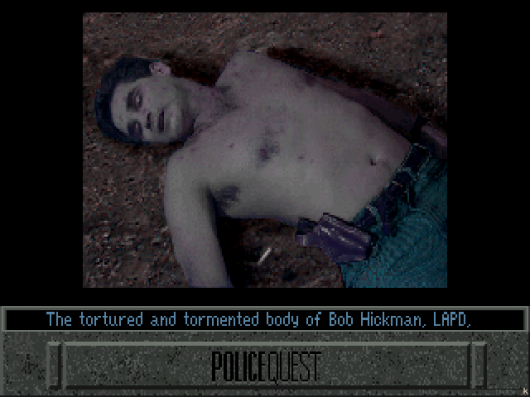 
Still, the Police Quest series has never been about deep characterizations or challenging narratives. They’ve been driven by the fascinating exploration of what it’s truly like to be a police officer – from the mundane moments to the real dangers the job presents. Here again, Police Quest 4 disappoints. Despite a very lengthy (albeit abridged) version of the actual LAPD manual accompanying the game, following police procedurals doesn’t really seem to matter much. You’ll use your notebook a couple of times, and your score will ultimately reflect how closely you follow the book, but you don’t need to read anyone their rights in the correct order, and your actions won’t determine whether convictions can be secured. There’s really very little accountability for not following the rules – with the notable exceptions of that all-time staple of Sierra games – the grisly death. Sure, this removes some of the more mundane work from earlier Quests, as you won’t have to bother dropping your weapon off before entering the holding cells, but it’s another subtraction that detracts from the simpler charm of the early games.

Open Season does feature puzzles to solve, more so than earlier games, and most are inventory-driven. The interface is nearly identical to the other games, with standard point-and-click movement and a hidden inventory at the bottom of the screen. To overcome obstacles, you’ll use many of the items in your inventory – a few in ways that break any sense of logical realism – after sometimes combining them first. There’s also a healthy amount of pixel hunting that is likely to leave you searching for the Alt-Tab release of a walkthrough.

In another subtraction by subtraction, hands-on driving does not make an appearance in Gates’s Quest. Instead, you simply click on a large map of L.A.’s neighborhoods to select your next destination. You will conduct countless interviews throughout the game in multiple locations throughout the city. There are no dialogue trees, however, so conversations with other characters are just a matter of clicking all the way through until you’ve heard everything. In order to advance the plot, you’ll need to ask characters the right question at the right time – and know when you need to visit them again. This might have been innovative, if again it followed any type of logical order. Unfortunately, Carie’s police work seems to follow a haphazard path of re-visiting the same people over and over. 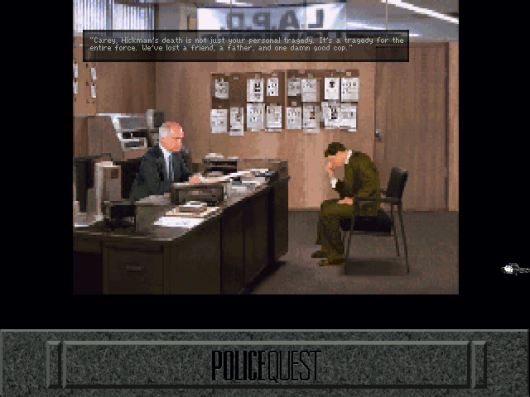 If you haven't already sought outside help to determine what you might have missed, backtracking through the city revisiting the same areas over and over again will make it look more and more attractive as an option. It’s particularly disappointing that Parker Center features an evidence lock-up and a S.I.D.S facility and then barely uses them. You’ll find more useful information by backtracking to roust the same riff raff you just left. Oh, and the morgue. You do get to know the morgue. There are a few moments of excitement in the game when Carie is placed in danger, but they’re too few and far between and feel manufactured.

The constant backtracking adds an artificial element of length to the game, and although Open Season only takes place over four crazy days, the game begins to border on epic. Yet PQ4’s biggest flaw is its endgame. After spending hours of police work with Officer Carie, the ending is forced, rushed, and utterly nonsense. He’s interviewed countless people about the murders, listened to hours of autopsy reports, and driven all over L.A. in the hunt for the serial killer, but all that work ends up being mostly futile. Carie suddenly comes face to face with the killer through a number of surreal moments that David Lynch would be embarrassed to script. The game hasn’t built up much tension to that point, to be sure, but if you’ve spent these long hours in Carie’s blues, you expect a payoff, to find some dark sinister secret tying up the sub-plots and red herrings dropped throughout your experience. Unfortunately, Sierra is no longer open to accept your complaint letter.

There are some bright spots to Police Quest 4’s presentation. With Carie hounded by the press unfairly, there are a few lighter moments where you actually get to see the newscast following your investigation. Also, each object you can click on allows the narrator to make some rather inspired remarks, and there’s even a couple of cute Easter eggs hidden – try all the floors the elevator can reach in the Parker Center and you’ll even come face-to-face with the Chief himself.

If you’re a fan of the Police Quest series, the final adventure-styled chapter in the franchise does offer more of the gameplay that you’ve come to expect, but without the lighter touch that made you care about what happened to Sonny and his fellow officers. If you’re looking for a gritty crime drama that captures what it’s like to serve and protect in L.A., Open Season misses the mark more often than it hits, creating an unintentionally bland and campy experience.

It may sound like I’m being hard on this game, as there are indeed certain things that are impressive about Police Quest 4. It offers a more realistic world than previous games, it doesn’t flinch from showing the darker sides of crime and the streets, and certainly the ambition behind its design is impressive. The problem is that the same care that went into its graphics, sounds, and digital animations wasn’t applied to its narrative or gameplay. So in the end, not unlike poor Officer Carie’s tireless police work and investigation, Police Quest 4 just doesn’t work nearly as well as it should.

With a conclusion that borders on incomprehensible, Police Quest 4 offers impressive technological advances from previous games in the series, but loses their simpler charms.

GAME INFO Police Quest: Open Season (Daryl F. Gates’) is an adventure game by Sierra On-Line released in 1993 for PC. It has a Illustrated realism style, presented in 2D or 2.5D and is played in a Third-Person perspective.