The simply named Richard & Alice, an indie adventure from the British two-man team of Lewis Denby and Ashton Raze, describes itself as a "mystery story about family, desperation, and the weather." While the attempt to emphasize the mysterious nature of its story is understandable, the game's true genre is much less mystery and more squarely within the realm of apocalyptic fiction in the bleak tradition of The Road—a story where no character is without substantial baggage, and no one's happy ending (should they survive to see it) will be without numerous mini-tragedies on the way. There aren't enough good games like this, but ultimately a deliberate over-emphasis on retro aesthetics and the creators' lack of handle on how sparse such a plot and its dialogue should be makes Richard & Alice as unfulfilling as it is unsettling.

The setting of our dreary tale is an undated future when the apocalypse has come in the form of an endless blizzard. Our titular characters (certainly not to be described as heroes in such a game) meet as cell neighbors in a surprisingly cozy (at least in comparison to the rest of the outside world) underground prison. After their introduction, there are a couple very gentle puzzles in your role as Richard, before the two characters talk and talk some more, and then the game moves to an Alice flashback, unfolding the story of her journey with her adorable son Barney from their original desperate trial to the next awful circumstance, etc. Then it's back to the cells for another barely-there puzzle, and then the two characters talk... and talk... and talk, and here we are reminded that one frequent downfall of indie games is a lack of judicious dialogue editing.

The game continues along this pattern, through a series of flashbacks of Alice's grim route to the jail, interwoven with in-prison conversations with Richard. Through a variety of notes, letters and other written discoveries, these flashbacks do a reasonable job of painting the detail of this world and all its hopelessness, including the evil elements that such a world is bound to create—and there are no punches pulled in some of the downright horrific visuals and descriptions. Underscoring the isolation is the fact that Alice’s scenarios really have no objective, other than the immediate survival of her and her son (one goal is to find shelter; another is to locate medicine for Barney). You’ll never meet another human, and there is never a sense of goal accomplishment—the feeling is more like a leaf being mercilessly battered by wind. 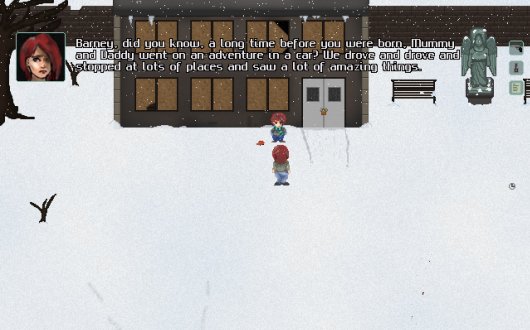 After the last dark turn of Alice's life (one that unfortunately is blatantly telegraphed), the game then jumps into its prison-escaping climax—where, in a series of about 15 minutes, a number of plot twists are revealed causing significant changes in how we perceive the characters (though likely not really increasing or decreasing the level of sympathy we feel toward them, since the gloom-o-meter is off the charts by this point). Then the game ends with one final gut-punch, an ultra-dreary final twist that carries all the triumph of sawing your own arm off (at least, the ending I got, though there are reportedly others the developers claim are less depressing). Then, roll credits and ponder the lack of life's meaning.

Richard & Alice is a short game, likely to be completed in well under three hours, with an absolute lack of puzzle difficulty or complication. All puzzles present are of the most basic “find key, use on lock” variety—as long as you remember to look at everything first before interacting with it, simple trial and error can overcome any initial difficulty. In fact, the only real hindrance to progress is the agonizingly slow walking speed with no run option, and large game maps such that if you do get confused about the immediate puzzle solution and feel the need to backtrack, you'll get very bored very fast. But even with the adventure so short, it is so utterly joyless that you'd be well advised, in the interest of your own psyche, to play it in short shifts.

In what I'm sure was a resource-related decision, Richard & Alice looks and sounds like a game preceding the early-1990s adventure era, and that's no compliment. The pixelated art is crude at best, with poorly-drawn top-down perspective and bland, colorless backgrounds (it is a land of endless snow, but one that still could look a little less dull). The walking animation is incredibly frame-y, and very difficult to watch, especially with the slow movement speed. There's some very light music at times, certainly nothing that really adds to the atmosphere, but mostly the game is content with the foreboding sound of freezing wind—even at some crucial moments when, without spoken dialogue, a bit of very light music might have really done some good. 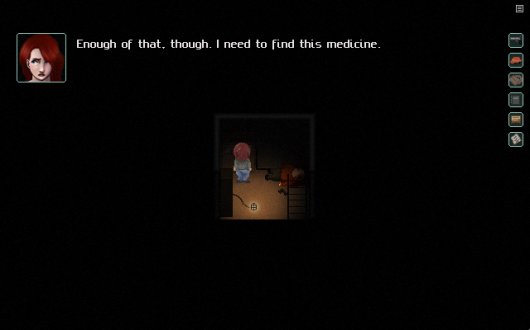 None of that really matters, however; you know why you're looking to experience a game like this, and it's for the writing and storytelling. Certainly the quality of the writing is the game's strength, particularly the way some scenes are handled between Alice and Barney, but the mantra "less is more" has not been attended to—the game is extremely over-written, with constant pushing for every conversation to hit every note on the emotional scale, resulting in about 50% more dialogue than is really necessary to tell a story in as stark a setting as this. In this fictional world, I could hardly fault the characters for wanting someone to talk to, but for the player it’s a test of patience to click through some of the conversations, which proceed well past their apparent natural conclusion. Similarly, I question some of the twists at the end—they are reasonably clever, but serve more to overcloud the morality of everyone than to strengthen the story.

In retrospect, perhaps my reaction to the bloated dialogue was at least partly a function of the lack of gameplay balance—talking is mostly all there is, especially if you click right away with every puzzle and keep the exploring to a minimum. A design that emphasized more world exploration and perhaps some additional puzzling would have eased the focus on the constant talking. 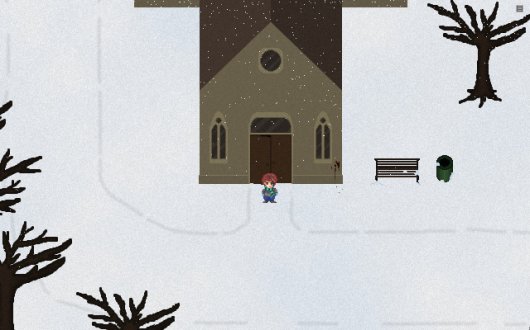 I mentioned earlier that I think there are not enough good games with this type of subject matter, but last year brought us The Walking Dead, a genre-similar adventure of apocalyptic fiction where all story branches represent the lesser of two evils, which proved to be one of the best adventure games ever made. Through expert writing and production quality, that game told us something positive about perseverance and the human spirit even through its emotionally devastating ending. And even The Road leaves the reader with a tangible bit of hope for the future in its final pages. There may be some inspirational thoughts about what it means to be a good parent in Richard & Alice, but that's debatable. Ultimately, the game's only lasting message appears to be that all humans eventually succumb to their evil nature, and that none of us are deserving of good fortune, nor will we find it, in the event of global tragedy—and that, frankly, perseverance will be a wholly useless endeavor should we ever reach such a level of desperation.

Maybe that’s all true, but it’s not a rewarding experience to be relentlessly hammered over the head with human depravity in a game with production values this crude and so little else to do, and I think even the hardest hearts want a game with more challenge into human insight than Richard & Alice offers. If you’re the type of person who constantly criticizes “Hollywood endings” and wishes that Breaking Bad wasn’t so darn cheerful, this game may be worth experiencing. For the rest of us, the overwhelming darkness makes this a game best left unplayed—and I definitely wouldn’t recommend it if you live in an area where it’s likely to snow soon.

Richard & Alice is available at:

Haters of happy endings—or happiness in general—are in luck, because Richard & Alice is a game so bleak and dreary that it’s hard to find any other purpose for seeing it through to the bitter end.

GAME INFO Richard & Alice is an adventure game by Owl Cave released in 2013 for PC. It has a Stylized art style, presented in 2D or 2.5D and is played in a Third-Person perspective.