Review for Fester Mudd: Curse of the Gold - Episode 1: A Fistful of Pocket Lint

It's been a long time since the days of Freddy Pharkas: Frontier Pharmacist, but you wouldn't know it to play Fester Mudd: Curse of the Gold. Created by indie developer Paavo Harkonen, with contributions from Freddy's Josh Mandel, A Fistful of Pocket Lint is the first episode of a planned three-part comic series sporting classic retro graphics and interface and an appealing western locale. There’s just something compelling about the Old West, and Fester Mudd utilises its setting to create a good atmosphere, though so far it hasn't really done much with it. The debut instalment is a deliberate throwback to classic '90s adventure games that provides some mild amusement and charming nostalgic gameplay, but a short playtime and heavy reliance on old-school conventions drag the experience down.

The titular hero is busy sleeping on his porch one afternoon when he receives mail from his brother. Apparently Bud Mudd has struck gold and wants Fester to meet him at a saloon in a town called Loamsmouth. Mounting his trusty steed (in his case, a donkey), two months pass before Fester completes the two-week journey to the quiet little town, only to discover that his brother has since vanished. A local gunslinger offers to help, providing you complete a few tasks he sets out first.

As a protagonist, Fester is really just a lazy guy who finds himself roped into an adventure. He freezes when a gun is pointed at him and can’t hold down his drink. Suffice to say, he’s certainly not your typical cowboy. Despite that, with the promise of gold at stake (oh, and finding his brother), Fester is keen to carry through his objectives. He’s a bit clumsy and at times nonplussed, but the way he seems to meander his way through things is endearing nonetheless. 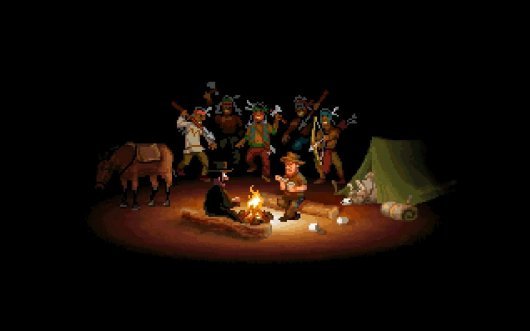 Unfortunately, A Fistful of Pocket Lint is essentially just a prelude to the main story. Even by episodic standards, there’s really no middle or end here – it’s all very much a beginning. This is compounded by the fact that it only took me around two hours to complete the game. I found this quite dissatisfying, since as soon as the story starts to get interesting you’re told to await the next instalment. There are occasional hints at the supernatural shenanigans that are likely to confront Fester in later games, but for now you spend all of your time in Loamsmouth and a couple of its surrounding areas. Two major tasks underpin the game: get into the saloon and then convince the gunslinger to come with you. Initially this involves getting a fake ID, but along the way you’ll need to recover a stolen pocket watch and wake up your mule, amongst other tasks.

Comedy is a tricky thing to get right, and Fester Mudd plays it pretty safe. It’s never laugh-out-loud funny, but at times it can be quite amusing, like the saloon patron explaining his knowledge of Bud's butt tattoo, or the military owner of the general store being named General Store. One great sequence involves the bartender asking the piano player to play a spooky piece to set the mood for a ghost story: cue the X-Files theme tune. However, a reliance on fart gags does begin to wear after a while. It’s all right at first, but even if your name is Mel Brooks, there’s only so far flatulence effects can stretch.

The puzzles aren’t particularly challenging, and seasoned adventure gamers should be able to breeze through them with relative ease. But as someone who isn’t a fan of spending ages figuring out obscure solutions, I found them satisfying in difficulty. As usual, you must collect items in your inventory and then use them to overcome obstacles, like cheating your way out of a drinking game or approaching a foul-smelling lake. Some puzzles involve combining inventory items first. Solutions are always grounded in some sort of logic, which reduces the need for annoying trial-and-error. There are some moments when it would have been good to break out of the standard ‘use item on hotspot’ mould, however. For example, at one point it is necessary to open a safe. After finding the instructions on how to do so, simply using them on the safe makes Fester carry the task out by himself, denying the player an extra layer of interaction. 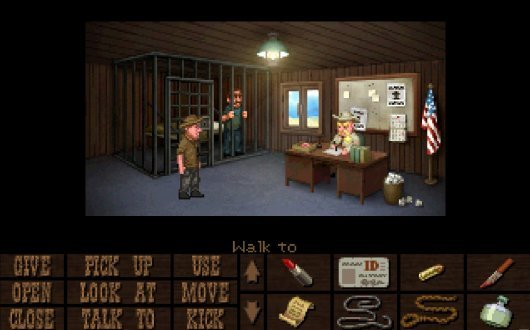 During your journey you’ll come across an assortment of different characters, like a shady alleyway dealer and a foul-mouthed, gun-selling clown. Everyone has a unique look, and although time spent with them is brief, you get a sense of who they are instantly. The setting is great, too. From the wooden buildings to the casual dead body slumped over in the saloon, the backdrop does a great job of evoking the atmosphere of the Wild West. I enjoyed exploring this small and dusty town, and the few different locations just outside Loamsmouth that open up as the game progresses help keep things fresh. The beiges and greens that make up the bulk of the colour scheme may sound dull on paper, but here they’re actually quite bright and work well.

That said, Fester Mudd opens with a message that the game is a tribute to the golden era of adventure games, and you'll instantly understand what that means. Graphically, it resembles the pixelated old Sierra or LucasArts titles, and though this retro style still has a certain charm today, there are drawbacks as well. First of all, when characters are talking they don’t really emote that much (apart from moving their mouths) and other ambient movement is equally limited. At the beginning of the game, when Fester is reading the letter from his brother, there is a pop-out box that shows a close-up of his face. This never happens again and it’s a missed opportunity, as displaying more detailed portraits during conversation would have offered a much greater sense of connection. There is another moment when Fester peers inside a tree and you get a full-screen glimpse of what he sees. Again, this only happens once, which is a real shame.

The biggest drawback is that there is no voice acting. The same was true of early '90s adventure games, of course, but that was due to the technological limitations of the time – a limitation that even the companies back then revisited and overcame when they could. Giving Fester and other Loamsmouth inhabitants voices would have provided them with an extra boost of personality and given conversations a much needed sense of liveliness. The game isn’t entirely without audio, however. Various music tracks play in the background, including jaunty piano tunes filling the saloon, but the guitar strumming is mostly forgettable and the score loops too often and becomes repetitive. At other times there is nothing playing at all, which I found drew me out of the experience. At one point I had to check that my speakers were actually still on. 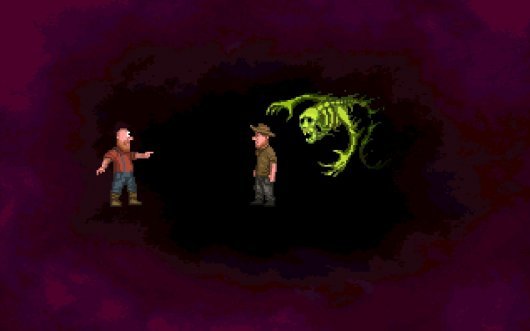 Another artefact from old-school adventures is the use of the SCUMM-style verb interface. At the bottom left of the screen there are nine actions for you to pick from. Some long-time adventure gamers may embrace this homage wholeheartedly, but for others it will serve as reminder of how archaic it now is, and that there’s a reason the genre have since evolved. Having to specify that you want to ‘open’ doors or ‘talk to’ a person is cumbersome. Handily, you can right-click to select the most obvious default option (though it isn't always the one you want), but the unskippable early tutorial somehow fails to mention this. You can also select your verb choice by using keyboard hotkeys, but it’s still an unnecessary task. Verbs like ‘kick’ or ‘move’ are hardly used and they feel shoehorned in when they are. There are not nearly enough unique responses to incorrect combinations, either, which minimises the very benefit of having so many options. There would have been no loss of difficulty if a two-click (look/use) control scheme was implemented, scrapping the verbs altogether, and the interface would have been much more intuitive for it.

Despite this over-reliance on bygone formulas, A Fistful of Pocket Lint is a decent first episode. The western atmosphere has a unique charm and Fester is a good lead who's been paired together with a fun cast of characters. It's unfortunate, then, that the story never really gets going, with the whole experience feeling like an extended demo for the full adventure yet to come. On its own, this game certainly won't convert those who believe that SCUMM-based non-talkies are best left in the past, but Fester Mudd does manage to raise a smile and offer a fairly fun ride, especially for those who enjoy classic adventures.

WHERE CAN I DOWNLOAD Fester Mudd: Curse of the Gold - Episode 1: A Fistful of Pocket Lint

Fester Mudd: Curse of the Gold - Episode 1: A Fistful of Pocket Lint is available at:

Though it clings a little too tightly to its classic retro roots, the first episode of Fester Mudd is a short but decent comedy western.

GAME INFO Fester Mudd: Curse of the Gold - Episode 1: A Fistful of Pocket Lint is an adventure game by PRANK Entertainment released in 2013 for Mac, PC and Linux. It has a Stylized art style, presented in 2D or 2.5D and is played in a Third-Person perspective.

What our readers think of Fester Mudd: Curse of the Gold - Episode 1: A Fistful of Pocket Lint