Life in the Dorms review

Xbox Live Indie Games is a special category under the Xbox Live Marketplace. These are games created by independent developers, rated and tested by the community, smaller in size and considerably less expensive than their mainstream counterparts. The downside is that, since they don’t go through Microsoft quality control, it’s a lot harder to find something really worthwhile amid a sea of Minecraft clones and embarrassing games that make use of your Xbox Live avatar in the most insipid ways. But sometimes if you dig deep, and then dig a little more, you may stumble upon something interesting. Something that could be worth your (literal) buck just by differentiating itself from its peers. An oddity among oddities. Such is the case with the comedic adventure Life in The Dorms.

You play as freshman Dack Peeples during his first days in college, a young man who is still emotionally attached to high school and terrified of what to expect next. Half the game will have you dealing with his paranoid delusions and convoluted theories about other freshmen, especially his roommate, Vincent, whom Dack is convinced is a serial killer. The other half will have you solving a kidnapping mystery that’ll make you laugh just by how trivial the chosen victim is.

Life in the Dorms plays like most traditional adventures on consoles. You’ll move around the 3D environment fetching objects for other characters, combining them to create new items that may get you out of sticky situations, and speaking to others to get information or convince them to give you a hand. Most of the action occurs within the three floors of your dorm building, so locations are pretty limited. A radial interface is used to interact with everything. Approach a character or object that you can interact with and it will highlight; press a button and a circle menu pops up with all possible actions represented by small icons. These are usually look at, talk to, use, pick up, or apply inventory. At any point you can access your inventory and combine objects or inspect them. 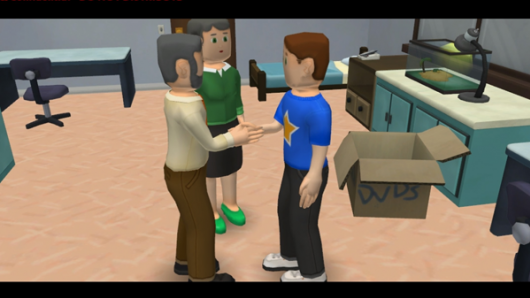 Unfortunately, as soon as you begin interacting with your surroundings you’ll notice that the animations can be a hindrance. If you’re in front of a fridge and ask Dack to open it, he’ll reposition himself to the exact spot he needs to be standing before getting on with the job, even if this location is a little further than when he started. Then you have to wait for the camera to move towards Dack or provide a close-up shot before anything actually happens. Considering the graphics are sub-par (not entirely unexpected for a budget game like this), it would have been nice if the game at least ran quicker to compensate for it.  Most of the characters look exactly the same, just with different clothing and hair colors, while the textures are plain and poorly drawn, the animations awkward and rigid. This crude visual style may be one of the hardest things for prospective players to get over just to give the game a chance, and even after you get used to the simple aesthetic, it never measures up to the standards set by the story.

Gameplay begins with very mundane concerns for Dack. He must unpack his boxes to move in, connect his laptop, twee—sorry, FLIT about his current status on social media, participate in a scavenger hunt to win a MyPhone and meet his floormates as his first tasks. Thus the game initially crawls with an excruciating slow pace that’ll make you think you’ll be stuck for the rest of the adventure as a courier, delivering books to your grammar-nazi friend Teague or taking random objects to your Resident Assistant. Thankfully, the experience gets considerably better after Chapter 2 thanks to the humor, numerous pop cultural references and escalating madness that reminded me a lot of Simon the Sorcerer.

Dack is a witty, impulsive, self-centered guy who will constantly crack bad jokes (the funny kind!) when prompted to look at something around him or when he hears anything that may have some kind of double meaning. Upon seeing a scared bear and ignoring his friend’s plea to not speak his mind with an awful pun, Dack can’t contain himself from saying, "Guess it was too much for it to bear." Most of the comedic situations stem from seeing how neurotic Dack can be and how implausible his presumptions are. Yet something absurd always happens that pushes these improbable events as far as possible, bordering on the surreal. 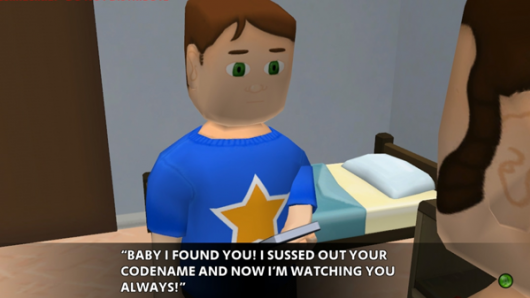 First it's small things, like Dack thinking for no particular reason that his roomie is going to be a serial killer, and when Vincent finally shows up he actually carries an axe with him all the time. Turns out he is studying to be a lumberjack, as he comes from a respectable lineage of tree cutters. But later events get increasingly ludicrous. Dack has a feeling that things inside an office simulation videogame are real, and despite Vincent insisting this is not the case, when you actually get to play to the game it ends up mixing with Dack’s real world in a crucial way for the plot, proving that some things inside it are indeed real.

Most of the other characters are stereotypes of college students. They are pretty two-dimensional and there’s little interaction between them. It would have been interesting to see how they'd react to each other considering their exaggerated traits and personalities, like Zeebob's and Gruessel’s game addiction, which actually make for some funny scenarios and are well incorporated into the puzzles. It is particularly satisfying when Vincent joins you to solve the kidnapping. He follows you around and gives far more reasonable insight than the unreliable and egocentric protagonist ever could, although most of the time Dack refuses to listen.

Some of the features you may find risible early on, like an awful panic animation where characters grab their bellies and rock in shock, are later the subject of self-parody when they are deliberately overused. A similar thing happens with certain gameplay mechanics. For instance, the game is fully aware of how arbitrary the conditions for some of its puzzles are and Dack often breaks the fourth wall to note this. This can be fairly clever when done right, but it doesn’t fully make up for the randomness itself, which can be quite infuriating. One such case occurs during the scavenger hunt, in which you must find some toilet paper for your RA. When you go to the bathroom there’s a whole supply on a shelf above you that you could easily reach with the help of something in your inventory, but Dack won’t let you do this until you check every bathroom stall to discover there is no paper in them. The restriction is annoying and contributes to the inexplicable determination of the game to slow things down early on. 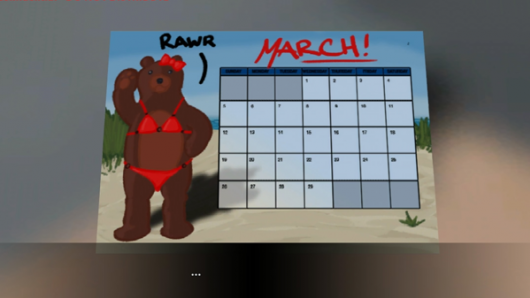 Towards the end of the game you’ll find some of the more enjoyable and less generic puzzles. They range from college-themed, where you have to correct the grammar of an essay with the help of Teague (his remarks during this part are hilarious!) to completely mental, like performing a splenectomy on a woman blindfolded. There’s no way to die when solving puzzles, but at some points you can make wrong decisions that take you to a screen notifying you that you have failed miserably as a freshman and are now going to be sad forever. Pushing Vincent too hard to do something he doesn’t feel compelled to do may result in him moving out. Nobody likes needy friends, after all. When this happens, however, you’re taken back to the moment before you screwed up, so it is actually not that big a deal.

Sound-wise, this game barely gets the job done. There is no voice acting at all and there are only a handful of sound effects, like doors opening and thunder as background for scary and solemn statements. Most of the time you’ll only be accompanied by one of the three tunes that loop continuously. Fortunately, they are rather minimal piano pieces that can be turned off if you wish.

Life in the Dorms is anything but a slick production and the experience could have been improved by tuning up the mechanics and getting rid of some of the courier-like objectives. But while they can't be entirely excused, most of the negative elements are minimized when you consider this is a $1 indie game offering pretty decent value for a solid five hours of entertainment. With its increasingly insane plot and lighthearted humor, it becomes a moderately fun ride that’s packed with obscure references and winks to LucasArts games that at the very least will make adventure-starved Xbox gamers chuckle a few times along the way.

You certainly won’t be missing a classic if you skip it, but for Xbox fans starved for adventure, Life in the Dorms is an admirable comedic effort that works enough of the time to consider its student-friendly price tag.

GAME INFO Life in the Dorms is an adventure game by Moment Games released in 2012 for Xbox 360. It has a Stylized art style and is played in a Third-Person perspective.

What our readers think of Life in the Dorms