The Mystery of the Dragon Prince

Nevosoft's Hypnosis HD is proof that we are living in a post-modern age of gaming. The mobile platform has brought new audiences, new game mechanics, and an entirely new business model to the  world of digital gaming. As this new dynamic market continues to evolve and adapt, designers are experimenting with entirely new toolsets to determine what will work and what won’t in this brave new gaming world.

This is my way of saying that Hypnosis feels as much like an experiment as it does an adventure game, combining a number of casual gaming genres and styles. It adds up to an experience that is as weird as it is fun – but also empty in any meaningful way. The lack of focus on any of the game’s elements, and a narrative that would generously be called unusual, makes it an ultimately failed experiment that isn’t likely to elevate the casual adventure game standard.

In Hypnosis, you jump into the psychoanalytic boots of Maya Anderson, who is summoned to the scene of a mental clinic – humorously called “Find Your Way” – to uncover what has happened to the disturbed patients within, and where their brilliant young doctor has disappeared to. You’ll do this by traveling through the mindscapes of the game’s eclectic cast by hypnotizing them with your flashlight. 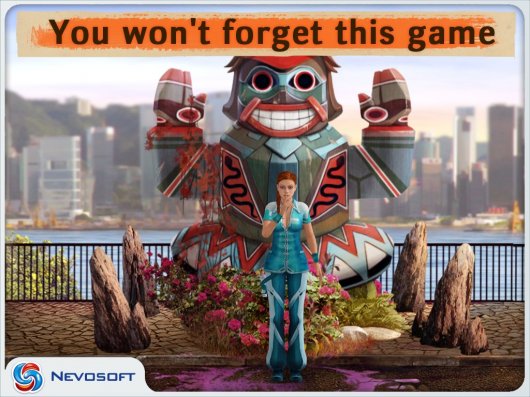 Gameplay is divided into three major areas. In the real world, Maya talks to each patient to discover what is currently troubling them. Information is revealed by simply exhausting every dialogue option. When all the topics are used up, Maya pulls out her holstered hypno-flashlight which allows her to metaphysically enter the patient’s psyche, where she must solve visual- and inventory-based puzzles. She will also battle each person’s personal “phobias” in these subconscious realms, which are depicted as creepy, hooded demons. This provides the final, and most challenging, gameplay element of Hypnosis. Each battle is a minigame played against the demon for control of the patient’s brain pathways.

The most impressive features of Hypnosis are how easy it plays and how good it looks. Moving Maya around each screen is as simple as clicking directly where you’d like her to travel. Tapping the edge of the screen will take her to a new area altogether. This control scheme integrates seamlessly and works well on the iPad; I didn’t miss my mouse. Clicking directly on Maya brings up the inventory, which is limited to no more than five items at any given time throughout the game. From there you can click on items to apply them directly on hotspots, no inventory combinations required.

The environments outside the mindscapes offer stunning, nearly photo-realistic vistas of the idyllic countryside around the clinic with a striking palette of fall colors. All of the character models look terrific as well, at least within the limitations of a 627MB mobile game. The game’s art direction really shines, though, when Maya pulls out her hypno-flashlight. Then the visual styles become as dynamic as the patients themselves. Each location in a patient's subconscious is a surreal mirror of the mental and cultural outlook of its subject. 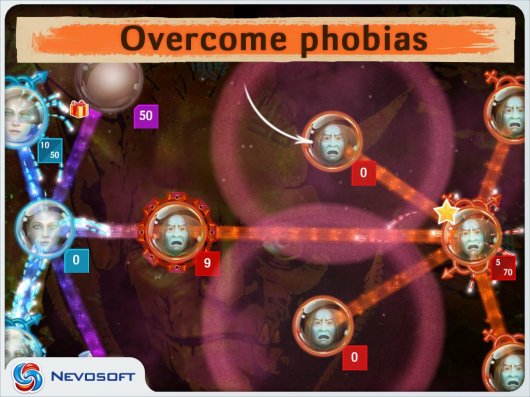 The game features a very odd assortment of characters, all of whom are played to a very recognizable stereotype. The police detective, who looks exactly like Grace Jones, has a psyche which resembles a disturbing collage of crime scenes and police equipment. The Richard Branson millionaire’s subconscious is a pastiche of guilt and confusion born from how he acquired his wealth. A Native American woman’s mind is a collection of native artwork and imagery. The gothy artist girl’s psychic landscape is a virtual art gallery of pain. The best of the bunch, easily, is the mind of the nerdy computer programmer (who seems like an extra from The Big Bang Theory, with the hipster haircut to match) whose subconscious is not unlike a Sega Genesis-era 2D sidescroller.

It should be noted that I’m not entirely sure Nevosoft has a good understanding of human psychology. Disregarding that hypnosis is no longer commonly regarded as a useful therapeutic tool, I don’t think that “pscyho-essence” is a standard medical term and phobias aren’t usually manifested as diminutive masked demons in most literature. Hypnosis is clearly using its whimsical backdrop to drive the plot and provide humor, but it never entirely embraces the absurd and ends up uncomfortably straddling the line between the serious and surreal. Without fully committing to either paradigm, the story becomes handicapped by these competing elements. Even the addition of a romantic sub-plot makes very little sense and provides little-to-no emotional depth. 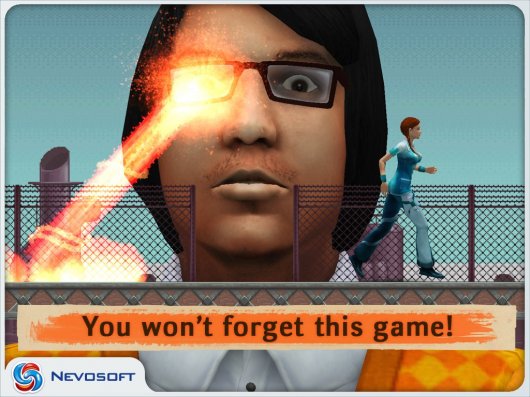 
None of the puzzles, whether wandering around the clinic’s grounds or a patient’s psyche, offer any significant challenge. It is, in fact, a stretch to call them puzzles. Although a few offer innovative presentations – in the scientist’s head, you have to free equations and integers trapped in the Dali-esque environment before placing them in their proper order on imaginary graph paper; in the artist’s dream world you fill in the empty, uncolored canvasses that dwell in her subconscious as you solve challenges – not a single puzzle took more than 2-3 minutes to work out. More time was spent simply following the steps through to completion, such as clicking through the events in the millionaire’s rise-to-wealth puzzle, once the solution was clear.

The most challenging part of Hypnosis is the minigame you are forced to play in order to remove a patient's phobia, which is essential in revealing necessary information to move the adventure along. When you confront one of the creepy little phobias zooming around the screen, all of a sudden you are presented with a virtual game board representation of the patient’s mind. Here you will fight against the computer-controlled phobia for control over neural pathways. While the rules are always the same, each battle may have a slightly different game board and many of the pathways you’ll be fighting for have different functions (some pathways have a higher “attack” rating, others are easier to defend). This minigame combines a puzzle element as you work out the best avenue to gain control of the essential areas, but it’s played in real time, which means you need a bit of quick eye-hand coordination to stay one step ahead of the fairly competent computer-controlled phobia.

This certainly may not work for the adventure game purist, because it suddenly pulls you out of the story and into a casual diversion. As a fan of tactical strategy games I actually found it rather enjoyable, and because the puzzles in the adventuring areas are so incredibly simple, it's the only sense of actual challenge the game provides. In fact, the final environment features a nearly non-stop battle against individual phobias, which was challenging enough that it made me consider the other option Hypnosis boasts that may give a purist pause: micro-transactions. 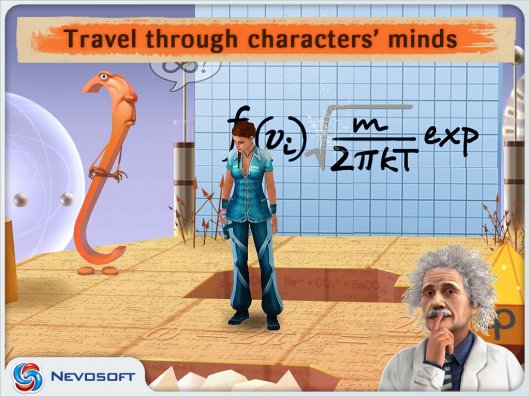 Throughout your journey, you'll be collecting green gems which can be used as currency to purchase frivolous upgrades like a new outfit for Maya, hints for the game’s puzzles, and even items which can be used to aid you during a particularly difficult phobia battle. If you haven’t found enough gems along the way, you're free to add your own real-world coinage to pick them up from iTunes or the Mac App Store. For instance, a pack of 50(!) hints will cost you 99 cents. I would never have considered purchasing them, and it’s unlikely you’d need them to complete the game, but they can be tempting.

One other cautionary note – while Nevosoft has chosen the protagonist of Hypnosis to be a woman, her choice of clothing isn’t quite as progressive. Her default outfit, a futuristic blue tracksuit, shows enough cleavage to make the old school Lara Croft blush. The other two purchasable outfits are a sexy nurse costume, complete with white stockings and garter belt, and a Native American outfit which may be as ethnically inaccurate as it is revealing. This design choice is unnecessary and made me wonder what audience they might be trying to please here. 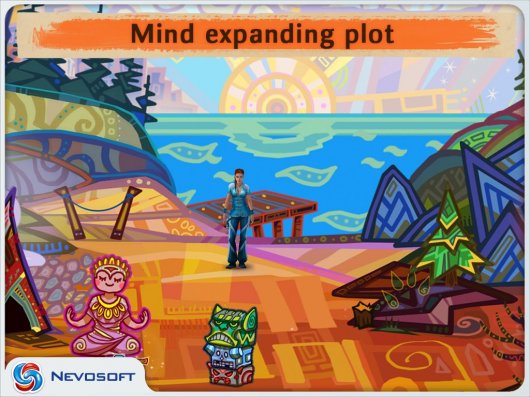 What’s strange is that all of these curious design choices are sandwiched by a very professional-looking and slickly produced game. In addition to the smooth, easy-to-use interface and immersive environments to poke around in, the voice acting is superb, and both sound cues and visual effects are right on the money. While the music isn’t particularly memorable, it does provide an adequate backdrop to many of Hypnosis’s more intense sequences.

It’s the combination of all these varied and uneven elements that makes this such a difficult game to judge. As the credits rolled on the final scene, I wasn’t entirely sure what I had experienced. I was reasonably entertained throughout, never bored during my eight hours of gameplay. I remained curious to see what the next mental dreamscape would offer and enjoyed the sense of accomplishment I got from defeating each phobia. The problem is that while Hypnosis never really fails at any of its disparate elements, it also never decides what it really wants to be. Even in the casual game marketplace, you can easily find more engrossing and challenging adventures, more sophisticated and engaging puzzlers, and certainly a range of much more captivating stories to enjoy.

In the end, Hypnosis HD is a game I would only recommend if you’re looking for a very attention-lite diversion while you sit through that long car ride or pass the time waiting for your commuter bus. Even then, just be careful that no one's looking over your shoulder, or you'll be left fumbling to explain why you're buying the lead character a bikini in autumn.

Hypnosis HD offers quite a few hours of mild entertainment, but its shallow story and awkward mixture of classic adventure and casual gaming mechanics make this lite adventure a disappointment.

GAME INFO Hypnosis HD is an adventure game by Nevosoft released in 2013 for iPad, iPhone/iPod Touch, Mac and PC. It has a Stylized art style, presented in 2D or 2.5D and is played in a Third-Person perspective. You can download Hypnosis HD from: We get a small commission from any game you buy through these links.
The Good:
The Bad:
The Good:
The Bad:

What our readers think of Hypnosis HD