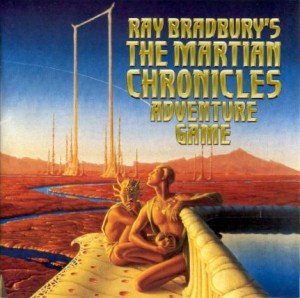 In a story by acclaimed writer Ray Bradbury, imagine that you are an explorer on your first journey to the distant red planet Mars, a planet whose first human settlers have mysteriously vanished. You leave behind an Earth poised on the brink of nuclear war – a war nobody wants, but which both sides seem powerless to stop. As your flight ends, you receive an urgent message: scientists have cracked the code of ancient Martian records which reveal that the secrets of the long-lost Martian race lie within the city of Xi. It is thought that these secrets may hold the key to stopping the war on Earth. Suddenly your mission is placed under military control. You know that the last two expeditions to Mars ended with the disappearance of their entire crews. Now you are arriving alone on the planet, knowing the Martians possessed the knowledge of illusion and telepathy. Their culture was almost beyond human understanding. Can you find the key to the lost Martian Archives and unlock their mysteries? Can you answer the ultimate question – are the Martians really dead at all?

The Martian Chronicles is available at:

Walkthrough for The Martian Chronicles

Screenshots for Martian Chronicles, The » View all screenshots


No screenshots for The Martian Chronicles available (yet).

Videos for The Martian Chronicles » View all videos

No videos for The Martian Chronicles available (yet)

What our readers think of The Martian Chronicles

There haven't been any reader that reviewed The Martian Chronicles yet. Please share your (short) verdict, a review or post your star rating!