We get a small commission from any books sold.
All Bitmap Books
Written by
Heidi Fournier — March 17, 2008

If you like Myst-style puzzle games then I can state up front that RHEM 3 is for you. But then if you are planning to play RHEM 3, you most likely have already played its predecessors, or at least other games of its type, so the contents of this game should not come as a great surprise to you: lonely errand runner wanders around a practically deserted post-industrial complex looking for clues, solving riddles, and taking notes. Copious notes, moreso than in any other game I have played in recent memory. If that sounds good, then the idea of sniffing out and putting together snippets of code, rerouting pipe and power lines, and using your ears to identify different sounds and recreating them probably makes you almost giddy with delight. If so, you are my people. If none of that sounds good to you, then turn back now for RHEM 3 is not the game for you.

Make no mistake -- RHEM 3 is all about the puzzles. Dozens of them. Some stand alone, some span the breadth of the game. And while it has the appearance of a storyline, as you are once again asked to do a task in the world of RHEM, the plot is about as substantial as tissue paper. This is entirely in keeping with the previous games, but it also has the benefit of being easy to jump into for newcomers not familiar with the series. The first two games respectively saw players trying to escape the world of RHEM, then return to find a hidden artifact at the behest of two brothers, Kales and Zetais. In the latest installment, you are once again given a task by Zetais. This time he asks you to find a black crystal. Why, we don’t really know. For what? Sort of sketchy on that too. It could be to power his bubble bath or translate economic documents into Latin. We don’t know. The point is that the story only really exists as an excuse to explore a whole new section of RHEM. Therefore, it figures very little in the actual discoveries you make in the world. The many books and rooms and objects you gather don’t exist to advance the story, they are the story, such as it is. Each puzzle you solve unlocks another part of the world, thus allowing for the puzzles to continue flowing, with still more places to explore and more challenges to overcome. The ultimate goal may be a black crystal for Zetais, but like Myst long before it, really you simply heed the call to duty and start picking up pieces and turning on the power as you go.

While the absence of any real narrative is an understandable point of contention for many gamers, I really didn’t miss the story since there was so much else to do. From the moment you step into RHEM 3, you have a huge and complex world to explore. I was very impressed by the number of environments in the game, and how well they are all laid out and linked together. The sheer volume of space and tasks is remarkable, and it took me well over 30 hours to finish the game. A fair bit of that time was spent in sketching out symbols and making notes on information I came across, while still more was spent referring my in-game journal, where a lot of crucial information gets copied. Of course, there were also a couple of hours spent wandering around in the ‘what do I do next, what have I forgotten’ way as well. 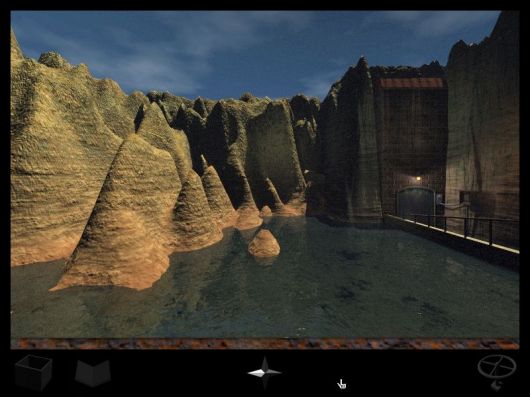 Most of the time, however, is spent solving the game's many puzzles. There are inventory puzzles, sound puzzles, levers to pull, power to turn on, and elevators to configure. There are a few standalone puzzles, like entering the correct code to lock a door, but the vast majority require a combination of exploration, reading, object gathering and lots of extrapolating the various tidbits you find. This will keep you moving and writing for a considerable portion of the game.

Though I didn’t come across any real stumpers in the puzzle department, I would term most of the challenges in this game as difficult. This is mainly because of the sheer amount of information that needs to be gathered and processed to solve many of them. A large part of the information is collected by entering the Library environment of the game. This is where you take pictures for your journal, of every page of each book in the Library. This journal gets used again and again, referencing such things as ciphers for a number of challenges as you work through the game. Elsewhere in your travels, you'll need to collect inventory items to be put together at different points, and there are a number of clues you will encounter scribbled on walls and doors as you move through each environment. Many of these scribbles provide clues you'll need for a puzzle later on. It's important to check the backs of doors, too, as certain important tips are often written where you won't see them at first, so if you don’t blunder into them, they can be easy to pass right by. If that happens you may find yourself mired down towards the end of the game, with no idea where to go or what to do.

Though there is some character interaction, it is all one-sided, showing full-motion video (FMV) snippets of various people asking you to find objects. Who these people are and how they relate to the world is never fully explained. They are just there as sign posts, pointing you in the right direction or confirming you have done something correctly. 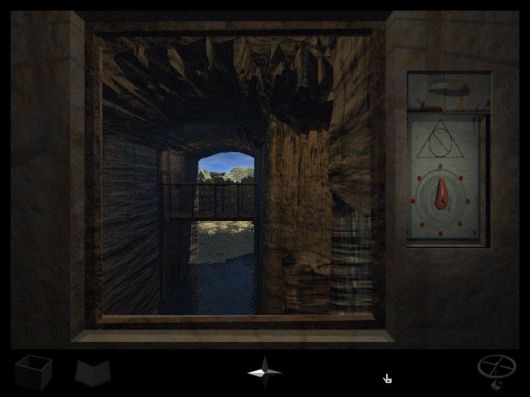 The soundtrack is full of moody, atmospheric music that works really well when coupled with the lonely ruins of RHEM 3. There is also a polished selection of ambient sounds such as water lapping and doors opening and closing. The sound is set low and thus succeeds in setting the mood without being intrusive or annoying. This is quite a feat for a soundtrack that plays throughout the entire game.

Compared to other games on the market, the graphics in RHEM 3 are not as pristine and refined as they could be. Both the FMV character cinematics and animations such as train rides tend to lose consistency and pixelate when running. Smaller animations such as water lapping in a reservoir succeed better. The design of the graphics, while good, do look dated, like what you'd have seen in a game from several years ago. As RHEM 3 is a game developed by a single designer, I'll chalk this up to natural limitations of resources and amount of time one can spend on a product before it needs to go to market, but the fact remains that the game is behind many of its contemporaries visually.

Of course, as a slideshow game, the designer was working with limitations from the outset. There is no camera panning, just static images that you move through node to node by way of dissolve transitions. The cursor changes to indicate directions you can go and this simple point-and-click navigation system works well. Most movement is limited to the four cardinal directions. At points you can look up and down, but you don’t have the freedom to explore at will. 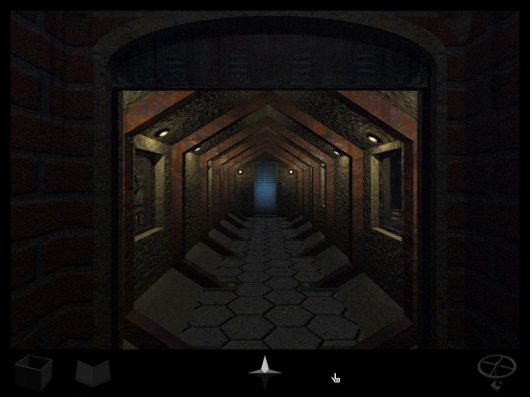 Though you can’t investigate every corner in detail, the game certainly does not lack for places to go. However, be prepared to get turned around from time to time. As you get to know the lay of the land it will get easier, but until then the industrial type of buildings that populate each environment do tend to look alike, making it easy to get lost or at least feel disoriented. While a very small map is found at the beginning of the game, it does not come close to encompassing all the environments in the game. A more comprehensive game map might be a nice inclusion in the next game, or even a zip mode, as there can be a lot of backtracking.

All in all, this is a game for hardcore puzzle enthusiasts. If you like games like Myst for the intellectual challenge, you should be pleased with RHEM 3. Though it can't compete graphically, and its game world isn’t nearly as well developed as Cyan's venerable series, it does offer a large number of challenges to be surmounted. The fact that it really has only the vestige of a storyline, presenting the gamer with little more than a reason to explore, is consistent with the last two games, and if taken on the series' own terms, the exploration and puzzles really make up the story and language of the game. Some players will hate this sight unseen; they want characters, dialogue, and developing plot intrigue. That is not RHEM 3. It is a modest game with a good soundtrack, a plethora of challenges, and a large game environment to explore. It is what it is, in other words, and what it does, it does reasonably well. It simply won't appeal to everyone, and for equally valid reasons. If you would rather spend time with a cast of characters or unravel a complex story, stay clear – RHEM 3 is not for you. But if you're gladly willing to sacrifice story in the name of puzzle solving, you'll find plenty here to wrap your mind around.

More a puzzle game than well-rounded adventure, RHEM 3 should nicely fill the void for those looking for a Myst-style game that will challenge and engage them for many hours.

What our readers think of RHEM 3

4.5 stars out of 5
Average based on 4 ratings
Your rating

Great Game. A good third entry in the series.

Rhem 3 play time: ~28 hours The trilogy is excellent as a whole. The games challenge your brain and provide many places and puzzles to explore. I love how the game creator took the time... Read the review »